‘Alien vs Predator: Requiem’ (2007): The Spinoff Sequel Nobody Asked For

So we’ve come to this: Wrapping up the final entry of the Alien-Predator series in this blog is none other than Alien vs Predator: Requiem (AVPR). The crossover-sequel to the original Alien vs Predator (2004) directed by Paul W. S. Anderson has, in the years since its release, gotten everybody, and I mean everybody, even those who despised and hated the original AVP, to lament the 2007 film’s release so much that they would rather sit though Anderson’s project than this film. And they should rightly think so because this film is garbage. 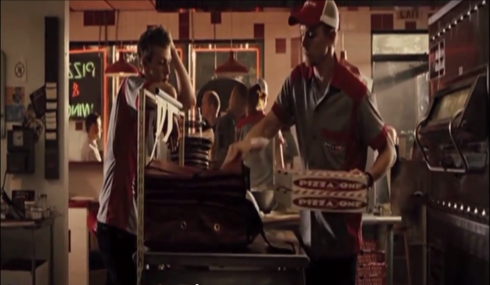 The creative sets for this movie include the exotic small-town pizza shop. This is gonna be good!

While it would still be a stretch for me to say that I hate this film, because I like to think that I’ve matured enough so that no film, no matter how poorly made, can evoke strong negative emotions in me other than regret… I do not like this film. It may be the single worst film I’ve seen in theatres. It is incredibly poorly made and is a blatant bastardization of my favorite film franchise of all time. AVPR cannot erase the resounding success of the series’ best, but it does embarrass the franchise and is the biggest reason why many modern fans struggle to take the franchise seriously. Nowadays when people 30 years old or younger think of H.R. Giger’s Alien or Stan Winston’s Predator, they think of cheap, cash-grab, straight-to-DVD quality flicks like this film. Movies like AVPR are why the series has such a laughable image in so many minds of this generation, and it is a shame.

AVPR is directed by Greg and Colin Strause, two digital FX artists who’ve spent most of their career making cheap special FX for bad sci-fi movies and also directing music videos. Unlike David Fincher, who spent much of his early career in similar ventures, I’d say it’s unlikely the “Brothers Strause” will graduate to directing the likes of similar caliber films as Seven (1995) or Fight Club (1999). The direction and cinematography of this film are abhorrent. Aside from every action sequence being so damned dark that the audience can hardly see what the hell is going on, handheld shaky cam and extreme overuse of extreme close-ups abound left, right, and center. Otherwise, the film is shot in such a vanilla, amateur fashion that the camerawork has no style or substance to it, and consequently all those obligatory filler sequences of characters talking at each other and non-killing-stuff moments are snoozefests.

As bad as the film is from a technical standpoint, AVPR fairs even worse with its screenplay. The characterizations, premise, and plot are so lazy and uninteresting that I’m surprised a story of this quality received a theatrical release. The thing that alarmed me right from the get-go in the pre-release news was the movie’s setting in a modern American small-town. Aside from giving a film that’s supposed be an Alien-Predator film a cheap, cliched feel like it’s right out of a generic slasher, the small town-arena gives the characters no sense of isolation and robs the film of much of its tension.

But that’s not even the worse part of the writing, not by a long shot. The characters are a bunch of cliched, cardboard cutouts. They feel ripped from a bad teen-horror flick, and consequently make AVPR feel like one of the endless, unnecessary sequels from a Friday the 13th (1980) or Nightmare on Elm Street (1984) series. That’s what the Alien-Predator franchise has now been demoted to because of AVPR — it is now another cheap, shoddy teen-slasher. Every line of dialogue uttered is awful, both because Shane Salerno’s script is a piece of shit and the B-grade actors can’t act to save their lives. Nearly every spoken word is cringe-worthy and almost makes you wish for the terrible, poorly lit action scenes to continue. 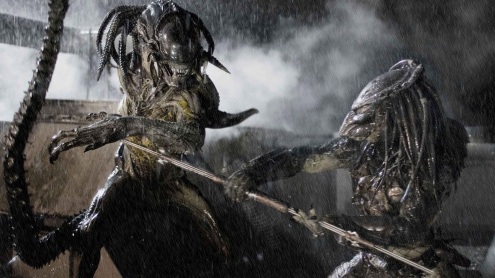 Just kill each other already.

The special FX and creature designs of both the Aliens and Predators are the worst in the series. Aside from the now infamous Predalien design, both the Alien drones and the lone Predator look cheaply made and are light-years from the imposing, threatening terrors they once were.

So that’s the last word on the Alien-Predator series on this site, at least with regard to official movie reviews until another sequel comes along. It’s sad to end on the worst film in the series, but really, I put off reviewing this trash because thinking about it made me sad. Again, I don’t hate this film — though it may have terrible direction, embarrassingly bad writing, cringe-inducing acting, and lack imagination or creativity in general (… I think that’s everything); it is, for all intents and purposes, an obvious, unapologetic cash-in on the misguided loyalty of AP fans like me, but I don’t hate it. As I’ve said before, there are very few films I hate. I just really, really don’t like AVPR at all.

SUMMARY & RECOMMENDATION: Alien vs Predator: Requiem is a sloppily written, cheesy slasher that has the magical combination of bad characters, laughable dialogue, and terrible direction. I can’t see what the hell’s happening, but would I really want to anyway?

? Garbage belongs in the garbage bin!

7 thoughts on “‘Alien vs Predator: Requiem’ (2007): The Spinoff Sequel Nobody Asked For”