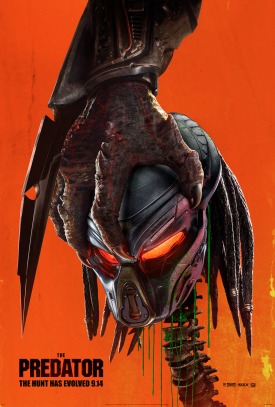 The idea that Shane Black, experienced writer and/or director of such hit films as Lethal Weapon (1987, 1989), Kiss Kiss Bang Bang (2005), and The Nice Guys (2016), and supporting actor and script doctor to John McTiernan’s Predator (1987), would direct and co-write another Predator soft reboot, sounded promising. It sounded as promising as the idea of talented yet inconsistent filmmaker Neill Blomkamp (District 9 [2009], Elysium [2013], Chappie[2015]) making a direct sequel to James Cameron’s Aliens (1986), starring Sigourney Weaver and Michael Biehn, an idea which never came to fruition. Oftentimes in life, if a situation or idea sounds too good to be true, it usually is.

From left to right: Boyd Holbrook, Trevante Rhodes, Keegan-Michael Key, Thomas Jane, and Agusto Aguilera. All have great chemistry, but memorable characters? Not so much…

It’s no secret I’m a monster fan (pun intended) of both the Alien (1979–2017) and Predator (1987, 1990, 2010) franchises (a famous line from Aliens inspired the title for this site), and even maintain the first crossover film, Paul W. S. Anderson’s Alien vs Predator (2004), as an unabashed guilty pleasure. I like to think of myself as somewhere in between the cynical, masochistic, pessimistic, nihilistic extremes of most other Alien-Predator fans, Star Trek fans, and (nowadays… ) Star Wars fans, and the pompous, cherry picking, self-righteous, religious optimism of Marvel Cinematic Universe (2008-present) fans; I try to approach these beloved franchises the way a grown child evaluates their loving but flawed (i.e. human) parents — appreciating their hard work and artistic wisdom, while also recognizing them as imperfect, complicated people/properties.

As such, I went into this latest Predator sequel with balanced expectations and cautious optimism given the cast and crew, minor controversies notwithstanding. I’ll elaborate on my balanced, cool-headed assessment of the film in a moment, but suffice it to say that Collider.com regular Kristian Harloff’s deflated, jaded expressions summarize most people’s reception to Shane Black’s The Predator, serious fans or not. Their evaluations, in my assessment, are accurate: The Predator is a mess.

As others have pointed out, The Predator’s biggest problem is its editing, but not necessarily its within-scene editing or editing with regards to action cinematography. Its overall scene-by-scene editing in terms of narrative flow, pacing, and story progression is almost unwatchable. To say this film possesses tonal whiplash as bad as the recent Fantastic Four (2015) reboot and pacing as haphazard as Suicide Squad (2016) would be putting it mildly. Each scene feels stilted and arranged at random, with hardly any establishing shots in the entire film. Character motivations necessary for narrative development are mostly absent, and several characters, including Olivia Munn, are introduced in such jarring fashion the film feels like its missing 30-45 minutes of material, with shots relating to scene coverage and exposition plucked at random from every sequence. This feels like a rough cut of a film before reshoots (production returned for reshoots twice), an unfocused, unfinished film.

Even if one overlooks these severe editing issues, which I don’t think is possible, as they cripple the film, numerous other issues affect The Predator either because or in spite of its incoherent narrative. Boyd Holbrook’s lead performance is flat and uninteresting, and the colorful supporting cast’s quips and crude jokes mix with the film’s prevalent violence, gore, and over-the-top character deaths like oil and water. The latter is a far cry from the excellent genre hybridization/deconstruction of the original Predator, and makes the corny “Jamaican Voodoo Posse” and “El Scorpio Colombian” drug gangs from Predator 2 (1990) feel like dramatic Oscar-bait. To add final insult to injury, the CGI FX of one of the titular predators (there are two in the film) and the predator-dogs (inspired by Predators [2010], no doubt), are unpolished and distracting.

The Predator is not a purebred disaster, but rather an amalgamation of many bad ideas and inconsistent auteur vision. A few positive elements perhaps relating to the latter include practical costumes and FX of the non-computer generated predator (the one featured in most of the trailers holding Holbrook by the neck), the aforementioned gore FX, and a memorable sequence where the non-CGI predator breaks out of a mad scientist’s laboratory.

By the far the most tense, fun sequence in the film, in which a predator breaks free from his human captors.

That’s about it, however. Where Shane Black’s poor execution or 20th Century Fox’s classical studio interference doomed the film is hard to say, but regardless it’s clear by this point Black is ill-suited for big-budget studio productions (e.g. Iron Man 3 [2013]) and attempts to reshape a film during production are recipes for cinematic failure. A combination of reshoots and disastrous editing cripples this movie, while poor digital FX, a miscast lead, misplaced comic relief, and the resulting tonal whiplash put the project out of its misery. To say this film had the potential (e.g. co-writer-director Shane Black, lead writer Fred Dekker, director of photography Larry Fong, Trevante Rhodes and Thomas Jane et al. as the supporting cast) to successfully reboot the Predator franchise and squandered it would be an understatement. Even Paul Sounds-like-a-much-better-director’s-name Anderson produced a better and more complete film out of a PG-13 Alien vs Predator. Out of both Alien and Predator series, only Alien vs Predator: Requiem (2007) is worse.

I’m the last type of fan to give up hope on franchises I love in this modern era of endless reboots, sequels, and graphic novel adaptations, but even my patience has a limit. If there’s one positive development to come out of this clusterfuck of a Predator sequel, it’s that I believe I am ready — finally — to move on from sequels to my favorite twin franchises. They had a good run; we’ll always have those great films and the memories to go with them, but I’m afraid we’re at an impasse, here: The Predator broke my heart.

SUMMARY & RECOMMENDATION: While I was never too taken with Robert Rodriguez’s overt nostalgia with and borderline plagiarism of John McTiernan’s classic in 2010’s Predators, we now know how much worse it could’ve been. The Predator is edited into oblivion, lacking any semblance of pacing, understandable character motivations, or narrative coherence. Adding salt to the wound are Boyd Holbrook’s forgettable lead, tonal clashes from misguided comic relief, and bad CGI. I owe Rodriguez and Nimrod Antal an apology.

— However… a neat sequence involving a Predator-prison breakout is fun, and the hard-edged, classical Predator violence is appreciated.

? Olivia Munn “wrote the book on evolutionary biology?” I’m pretty sure that was Charles Darwin.

I love movies, music, video games, and big, scary creatures.
View all posts by The Celtic Predator »
« ‘Padmaavat’ (2018): A Stylized Combination of Dance, Violence, & Flame
‘The Divines’ (2016): The Girl from the Wrong Side of the Tracks »