My feelings regarding Disney’s Marvel Cinematic Universe (MCU, 2008-present) in particular and superhero tentpole blockbusters in general are no secret. I’m not the subtlest writer, nor am I hesitant to share my blunt assessments of pop culture phenomena. With that in mind, this essay is neither about acknowledging the strengths of big, bold, FX-driven blockbusters of the 2010s, nor about bitching how forgiving both critics and the masses are in their analyses of these trendy, ubiquitous blockbusters… no, this review is about how the biggest, boldest, most ubiquitous superhero franchise ends. Or, at least how this chapter of that franchise, the Marvel Cinematic Universe (MCU), ends.

Though the final two Avengers films, Infinity War and Endgame, are their own self-contained stories, they function in the broader MCU franchise as Parts 1 and 2 of the closing chapter of the series as we know it. Certain characters may continue in future installments (e.g. Chris Hemsworth’s Thor), while newer Avengers will carry the bulk of the franchise’s weight (e.g. Chadwick Boseman’s Black Panther, Tom Holland’s Spider-Man, the entirety of the Guardians of the Galaxy [2014, 2016]), yet the original narrative arc started by Iron Man (2008) is finished. I can’t say it wasn’t an ambitious and hugely financially successful project. 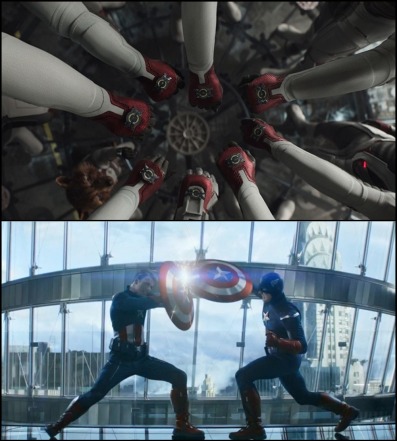 It may surprise you that, in hindsight at least, these films share little in common despite being directed and written by the same filmmakers. Brother directors Anthony and Joe Russo, along with screenwriters Christopher Markus and Stephen McFeely, have been responsible for most of the best works in the MCU (e.g. The Winter Soldier [2014]). They work well together, the Russos knowing how far to push the pandering CGI set-pieces without going overboard, how to coax good performances from their starring cast, and having affection for more grounded, well choreographed close-quarters-combat sequences inspired by true action films like The Raid (2011) or John Wick (2014, 2017). McFeely and Markus, meanwhile, know how to structure their stories with minimal bloat, tight pacing, and good dialogue with appropriate levels of “quip.“

It’s surprising, then, as I said, how Infinity War embodies the greatest of these filmmakers’ strengths while Endgame — not a bad film, by any means — is one of their more underwhelming (re: overrated, see Captain America: Civil War [2016]) features, powered more by sentimental nostalgia than novel storytelling or notable cinematographic execution. From a screenwriting perspective, Infinity War (IW) has the tightest, most efficient script of any mainstream superhero movie I’ve seen since at least The Dark Knight (2008), utilizing a massive, 19-star ensemble across 3-4 subplots over a lean (yes, lean) 2.5 hour running time. Its action sequences are trim, effective, well paced, and hit both dramatic and comedic beats like Hawkeye (Jeremy Renner) hits bulls’ eyes. Endgame, by contrast — and again, not arguing these points as if it’s a poor film in total — feels its three-hour (yes, three–hour) length, succumbs to the industry-standard CGI clusterfuck spectacle by its final act, misuses its principal villain, and drags throughout its extended prologue and opening act. It’s worth noting Endgame handles about 1/3 fewer starring castmembers, yet somehow panders more eye-rolling fan-service than its immediate predecessor.

From a characterization and development standpoint, however, Endgame fares better with its heroes than IW. Captain America/Steve Rogers (Chris Evans) and Iron Man/Tony Stark (Robert Downey Jr.) enjoy their best chemistry yet and satisfying, emotional conclusions to their series arcs, ending the franchise on a strong note.

Contrasting this, however, is how much better IW handles its villainous protagonist (you read that correctly), Thanos (Josh Brolin), and various supporting characters on both sides of the good-vs-evil divide. Much of my disinterest in the MCU, without delving into gratuitous detail, pertains to how one-note most of its heroes are despite their actors’ charismatic performances, while their villains remain forgettable, mindless obstacles. Tom Hiddleston’s Loki (see The Avengers [2012]) is what passes for a “strong, memorable villain” for much of the series. Imagine my satisfaction, then, when IW revealed itself to be an epic inverse of the standard MCU format — the villain (Brolin) drives the story, dominates all character development, and is an imposing, formidable threat to our heroes; he is all this, mind you, without being too powerful or reducing narrative tension. Even Brolin’s henchmen, “the Black Order,” portrayed by Carrie Coon, Michael James Shaw, Tom Vaughan-Lawlor, and Terry Notary are intimidating and memorable.

In terms of overall direction, including action-direction, IW again bests its 2019 counterpart. Endgame is charming how it subverts various character archetypes, in-jokes, and established backstories in clever ways, including through occasional visual humor. However, these films are primarily action based, however FX-driven that action may be, and in terms of weaving various bodies through effective CGI, intricate choreography, and sweeping camera movements, IW is the MCU at its best. Much of the overarching flow of the action sequences is a function of clever editing in conjunction with McFeely and Markus’ ironclad screenplay, but every scene is well staged, well choreographed, and — shockingly — never overuses digital FX to swamp its main characters or the actions’ intensity. Even IW’s finale is satisfying as a function of, not despite, its chaos, utilizing interesting enemy designs and behavior to maximize narrative stakes. Endgame, by contrast, completes its story with more standard-fare CGI mayhem, featuring little in the way of interesting choreography or clever twists.

Perhaps the simplest comparison between these final two “original” MCU movies is how efficiently they utilize their large ensemble casts. In this respect, there is little comparison, given how IW makes better use of a larger cast and introduces a novel antagonist (Brolin’s Thanos) as its narrative center in an interesting way. Endgame boasts greater developmental payoff for series’ favorites Downey Jr. and Evans, as I stated, but it also overemphasizes the bland Nebula (Karen Gillan) and shoehorns a less interesting version of Brolin’s Thanos (think time travel… ) and the inexplicable Captain Marvel (Brie Larson). IW, on the other hand, wastes nobody and nothing, and executes the series’ best singular ending with its best villain.

Neither of these films will be compared and contrasted the way I feel all Marvel films should be, a function of general audiences’ and fanboys’ inclination to view them more as episodic installments in a theatrical television series than individual movies. This viewpoint is understandable, but I note how each of these movies boasts a distinct three-act structure, embraces feature-length formula over, say, super-sized teleplay formats (e.g. Game of Thrones‘ [2011-2019] lengthier episodes), and is no less “producer-led” or more “writer-driven” than the average Hollywood blockbuster. Still, Avengers: Infinity War and Endgame make a nice double-feature as a function of their shared screenwriters and directors, as well as how different they turned out despite that. I’ll be saying goodbye to mainstream comic book-adaptations for the foreseeable future — really, my following of Marvel, DC, and X-Men related properties has been declining for a while, now — but these two films are as fitting as any with which to end that superhero movie-binge. It was a fun ride.

SUMMARY & RECOMMENDATION: Infinity War affirms the Russo Brothers and screenwriters Christopher Markus and Stephen McFeely as the Marvel Cinematic Universe’s best filmmakers, or at least the ones who work best under producer Kevin Feige’s watch. Endgame, meanwhile, isn’t as effective an argument in hindsight, but its strong conclusions to its series two most likable characters and entertaining time-traveling antics make up for its so-so blockbuster action.

–> Infinity War comes HIGHLY RECOMMENDED, while Endgame is RECOMMENDED as a satisfying followup.

? Are there any other spooky, purple space-monsters?