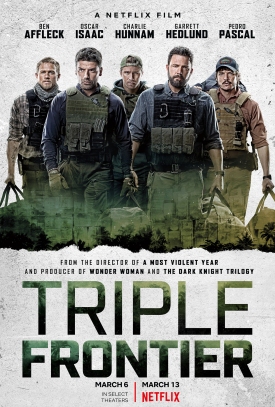 Bland heist thrillers are all too common in modern cinema; from Ocean’s Eleven (2001)-knockoffs (… and sequels) to The Italian Job (1969) remakes to the inexplicably titled Now You See Me (2013, 2016) films, movies centered around stealing large amounts of money are plagued with repetitive, predictable weaknesses: Most of them open with boring team-building sequences (Act 1) led by an uninspired cast, then transition into longwinded analyses of said cast’s financial target — usually property of a forgettable, mustache-twirling villain (Act 2) — then finish in a stylish, entertaining heist attempt (Act 3). The latter is either (A) pulled off despite a few expected hiccups, or (B) fails with castmembers learning a moral lesson, like maybe the real ultimate heist were the friends they made along the way.

You understand what I’m getting at, here. It’s a genre or subgenre formula that’s as reliable as any in cinematic history, and I’m never one to bitch about film structure and screenwriting principles for the sake of it. More often than not, I love formula for its reliability, because formulas work. They exist for a reason.

Despite its well shot, action-packed opening, Triple Frontier is a rather quiet, subdued, and melancholy heist thriller.

Complaints about derivative execution of heist movie formula are just as powerful, however. Most heist films are only entertaining during their titular heist job, the most reliable part of their subgenre formula. Everything leading up to that is weak sauce without a dynamite cast or director — again, recall Steven Soderbergh’s wonderful job with a high-profile cast in the influential Ocean’s 11. In order for stagnating genres to achieve resurgence, the predictable (formulaic?) solution is for genres to reinvent themselves in some way.

Enter Jeffrey McDonald (J. C.) Chandor, whose writing and directing career hit the ground running with three strong, critically acclaimed dramas in a row (Margin Call [2011], All is Lost [2013], A Most Violent Year [2014]). Triple Frontier, based on a screenplay by Mark Boal originally written for Boal’s longtime colleague, Kathryn Bigelow, is Chandor’s first action-oriented genre film and first project based another person’s work. His refreshing though not revolutionary take on the cinematic heist includes admirable execution of Boal’s commentary on retired veterans of foreign wars, the military industrial complex, private security firms, etc. It also adds a novel act to the heist film’s traditional three-act structure: The escape!

Triple Frontier’s analysis of what veterans can do, or perhaps should do following their tours of service is strong, nuanced, and without easy answers; it neither glorifies their tenure as soldiers nor demonizes the defense contractor (re: mercenary) nature of the story, instead letting its story frame questions of patriotism, self-enrichment, and disillusioned careerism in an ambiguous way. Much of this complicated nuance is a function of Boal’s altered heist-movie structure, whereby the film establishes its principle characters (Ben Affleck, Oscar Isaac, Charlie Hunnam, Garrett Hedlund, and Pedro Pascal) with little foreshadowing of the 2nd and 3rd Act twists to follow. The film condenses the actual heist part of the film — both its planning and execution — in favor of its aftermath.

Triple Frontier spends the bulk of its runtime detailing its castmember’s ambitious, arduous, and increasingly desperate escape route from their relatively easy robbery/execution of a prominent Columbian drug lord, the latter whom Isaac’s character had been tracking as a private military adviser. These characters’ attempt to exfiltrate the film’s eponymous area (Tres Fronteras), the borders of Brazil, Colombia, and Peru, which in the film are teaming with cartel allies and competitors of the boss they just ransacked, grows more interesting the more hopeless their situation becomes.

Much of this desperation is visually apparent in the memorable, reference-level location-photography completed in Oahu, Hawaii, whose diverse habitats double for everything from the Amazon rainforest to the Andes Mountains. Chandor’s repeated use of otherwise beautiful long-shots illustrate the imposing physical landscape around his characters, emphasizing how much these characters are in over their heads and at the mercy of both their environment and the local populace. Watching this effective, well oiled cast scratch, claw, and stealth their way to freedom as the fruits of their heist are inevitably sacrificed in favor of their survival is suspenseful and entertaining. I could not predict where this film’s climax was leading, and that factor alone made the narrative worth it. 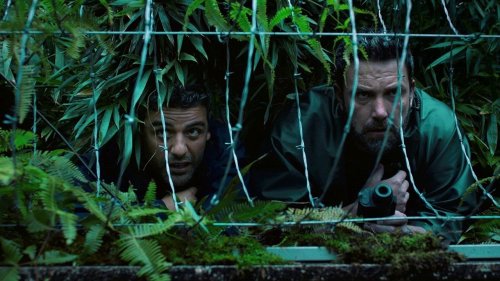 Leads Oscar Isaac (left) and Ben Affleck (right) scope out a drug lord’s estate along the border of Brazil and Colombia toward the end of the movie’s first act.

With all that in mind, Triple Frontier is no groundbreaking film, heist-oriented or otherwise, and lacks much of the overarching visual style of Chandor’s previous efforts (e.g. A Most Violent Year). The irony of a genre-film boasting less stylish flair than its director’s earlier dramatic projects is not lost on me, though the charisma of this film’s supporting cast are. Triple Frontier is empty beyond its starring castmembers, with little to no effort put into any of its supporting roles, antagonists, or extras beyond the aforementioned political commentary. I don’t care much at all about the latter, to be fair, though the film’s non-insignificant screentime dedicated to them is a problem.

Triple Frontier is another solid exclusive for Netflix, another mid-budget, non-superhero genre picture that would’ve flopped in theatres before dying a slower death on physical media. As it stands, J. C. Chandor and Mark Boal’s latest reinvigorates the heist film without erasing its foundation, deepening its themes and development without apologizing for its set-pieces. I appreciate an otherwise well shot yet “quaint” genre movie flaunting its social commentary, actually being about something beyond spectacle without hitting its audience over the head with its ostensible message. By making subtle yet significant shifts in the cinematic heist formula, Chandor and his team demonstrate the thrill of stealing a whole bunch of money from bad people still has bite to it.

SUMMARY & RECOMMENDATION: Triple Frontier won’t be winning any critical awards for screenwriting innovation or artistic affirmative action, but its solid fucking script, intelligent themes, and unforgettable location-photography set it apart from the bulk of heist films generated from the success of Steven Soderbergh’s Ocean’s 11 trilogy (2001, 2004, 2007). It’s a unique combination of cinematic elements from The Hurt Locker (2008) to Heat (1995).

— However… Triple Frontier’s supporting characters consume too much screentime with too little payoff. Chandor’s command of action cinematography is serviceable at best.

? Use those GPS coordinates for the sequel?