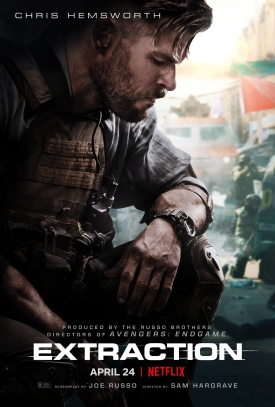 I’ve long grown impatient with the modern state of movie theatres, from their homogeneous content to their obnoxious patrons to their gratuitous in-house advertisements, but have seldom heaped praise on most streaming platforms’ mid to higher budgeted genre films, especially their blockbusters. Netflix et al. have found great success with their critically acclaimed “prestige pictures,” dramatic or lower budgeted films that compete at festivals or even the Academy Awards (e.g. Beasts of No Nation [2015], Roma [2019], The Irishman [2019], Marriage Story [2019], Mudbound [2018], The Ballad of Buster Scruggs [2019], etc.), but their in-house or exclusive tentpole features (e.g. Triple Frontier [2019], Mowgli [2018], Bright [2017], Spectral [2016], The Ridiculous Six [2015]) are much less consistent. Popular streaming platforms appear, thus far, to be viable alternatives to the cineplex model rather than a replacement.

That situation may change depending how long the current (May 2019, as of this writing) COVID-19 pandemic endures and how world economies shift in response. Common sense would assume movie theatres, along with crowd-oriented businesses such as musical concerts, Broadway plays, and professional sporting events, would be the last establishments to reopen; in the mean time, streaming companies have seen a boom in customer activity and stock value, with few better positioned to capitalize on the upended global market order than Netflix. In response, major Hollywood studios have shifted strategies, at least for the time being, releasing newer properties as online rentals for around $19.99 a household. 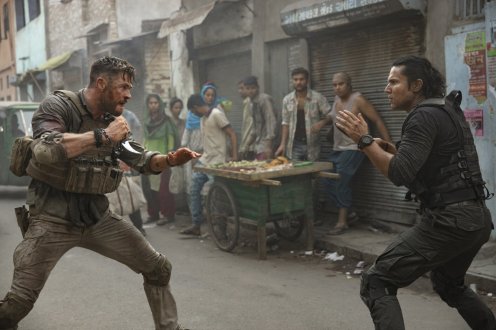 Hemsworth (left) locks blades with Hooda (right) at the end of the film’s long-take centerpiece.

A significant property amidst this possible seachange of mainstream filmmaking consumption is Extraction, another high-profile Netflix Original and the directorial debut of experienced stuntman and choreographer, Sam Hargrave. Hargrave cut his teeth on action blockbusters like the Russo Bros.’ Civil War (2016) and Endgame (2019), as well as David Leitch’s Atomic Blonde (2017), Deadpool 2 (2018), and Wu Jing’s Wolf Warrior 2 (2017); that background translates well to this veritable cinematic descendant of John Wick (2014; directed by former stunt coordinators Leitch and Chad Stahelski) and The Raid (2011; a huge influence on the Russo Bros.’ Marvel Cinematic Universe [MCU; 2008-present] films). This cross-pollination of burgeoning action filmmakers has me excited for the future of Western action movies and global action cinema in general, as I hope the rise of streaming and the Russo Bros.’ Hollywood clout (their MCU films were among the franchise’s most popular and successful) shift the status quo from FX-driven spectacle to stunt-heavy cinematic violence.

Relative to those recent popular titles, Extraction is a tenacious if overall middling effort comparable to Atomic Blonde or Wolf Warrior 2 over, say, John Wick. Its straightforward premise is reminiscent of The Raid, if not as low-budget: A prominent Indian gangster’s son (Rudhraksh Jaiswal) is kidnapped by a rival faction in neighboring Bangladesh, so a captain (Randeep Hooda) under the Indian drug lord (Pankaj Tripathi) hires a prominent black market mercenary (Chris Hemsworth) to rescue Jaiswal. Needless to say, the plot thickens with a few decent twists throughout, while screenwriter Joe Russo allots multiple quieter scenes for bonding between Jaiswal and Hemsworth, all of which combine for one of the better paced action extravaganzas of the past few years. Extraction is a far smoother ride than either the longwinded Berandal (2014) or the backloaded Last Blood (2019), spacing its set-pieces for maximum suspense and to limit exhaustion. It’s not quite the perfect roller coasters that are Fury Road (2015) or the original Raid, but for the movie’s part, Extraction feels epic at just under two hours (~117 minutes) and doesn’t overstay its welcome.

As for the movie’s action, Hargrave works well with cinematographer Netwon Thomas Sigel (see his work on Drive [2011] and the better X-Men [2000, 2003, 2014] movies), crafting intricate yet efficient close-quarters-combat sequences that interchange with shootouts and vehicular mayhem with ease. The film’s highlight is the much lauded 12-minute long-take at the end of the first act, where (spoilers… ) Hemsworth’s exfiltration with Jaiswal goes awry due to outside treachery, and the two must improvise an escape. What’s interesting about the centerpiece is how it doesn’t pretend to be a seamless, continuous take so much as it uses various whip-pans and digital FX to clarify the geography of characters involved in this elongated, bonkers sequence. This oner isn’t commendable for how long it is — it’s more or less half a dozen modest oners encapsulating 3-4 impressive action sequences strung together with hidden cuts — nor for how long it’s pretending to be, a la 1917 (2019), Birdman (2014), and others. Rather, it’s impressive for its action clarity and diversity of stunts, much like the rest of the film distilled into a “proof of concept” short.

Most of Extraction’s weaknesses are a result of its streamlined narrative and abbreviated character development, including Hemsworth’s questionable flashbacks regarding a deceased son and a pointless guest performance from David Harbour. Other character moments, like those for Hooda, who gives a great dramatic and action star performance, fare better, though his arc’s conclusion is disappointing. Altogether, what limits the appeal of Extraction the most is its hardcore dedication to action genre formula above all else, while at the same time lacking the minimalist structure of a Raid or the seamless, efficient characterizations of a John Wick, despite having action sequences on par with those great films.

Extraction remains a breath of fresh air, for lack of a better phrase, despite its obvious shortcomings. A revolutionary genre film it is not, nor is it dynamic enough to recommend to those who otherwise dislike violence on film a la Fury Road; still, that’s a fucking high bar to compare most any movie, Netflix Original or theatrical release. Those with even a passing interest in lead Chris Hemsworth, screenwriter Joe Russo, or impressive camerawork in general will find much to like in Extraction, while action fans need no convincing. There’s enough chemistry between starring castmembers Hemsworth, Rudhraksh Jaiswal, and Randeep Hooda to give the movie heart, but the film also deserves criticism for its incoherent flashback montages and David Harbour’s waste of screentime. Regardless of one’s persuasion, though, Sam Hargrave’s directorial debut bodes well for the future of the action genre, especially as the filmmaking industry transitions further to video-on-demand.

SUMMARY & RECOMMENDATION: Well paced, shot, and acted, Extraction is a quality-made and grounded action movie that provides the casual blood squibs, fisticuffs, and practical stunts long gone from Hollywood blockbusters until quite recently. If this is the future of action movies in this pandemic-stricken world, at home or abroad, I think the genre will do just fine.

— However… its supporting cast is less consistent, its flashbacks are cornball, and Harbour has no reason to be in this movie. Hargrave doesn’t take full advantage of Hemsworth, Jaiswal, and Hooda’s chemistry.

? They should do a crossover between this and Wolf Warrior.