‘Last Blood’ (2019): Pleasant for Action Fans, Not So Much for Everybody Else

Perhaps this situation only applies to myself, but I find satisfying theatre-experiences rarer as I age. Perhaps that subjective feeling is a function of aging, or perhaps it is related to the unsatisfying infrastructure of modern theatrical releases (e.g. low-resolution digital prints, filthy theatres, obnoxious theatre patrons, cell phones, etc.). On some level, however, I argue the current lack of rewarding theatrical experiences is related to the sheer lack of worthwhile standalone movies being shown on the big screen. A great theatrical release, especially a singular feature-film that can be appreciated on its own with little to no connections to established intellectual properties (IPs), is a true rarity nowadays. As much as I enjoy certain comic-adapted blockbusters, for example, I would be lying if I said a significant portion of my enjoyment of them isn’t tied to their larger franchise storyline, or rather their characters who’ve they’ve developed over years.

The more film franchises share the format of long-running television shows, the greater a viewer’s time investment becomes and the greater the amount of filler one must sift through (e.g. Thor [2011], Ant-Man [2015]) to reach the standout “episodes” (e.g. The Winter Soldier [2014], Infinity War [2018]). I don’t care to do that, frankly, especially if that means paying money out of pocket for each theatrical installment.

Theatrical film series like Sylvester Stallone’s Rambo (1982, 1985, 1988, 2008, 2019), however, feature the kind of self-contained stories and standalone adventures I crave. Sure, it’s as much an established franchise IP as any, but its overall style is more a throwback to classical movie franchises that retained lead and supporting characters from film to film, and little else. The Rambo series has of course retained Stallone as the titular character, screenplay contributor, and occasional director (see Rambo [2008]), but its most defining features are its bloody, gore-soaked action and unapologetic tone. To say this series is, on its surface, tailor-made for the likes of me would be stating the obvious, but my response to each Rambo film has varied with the series’ wide range of quality execution. What keeps me coming back to this series is the brand’s potential to wipe the slate clean and tell a freestanding action premise with each installment. The series boasts the action tone and style I like with none of the franchise baggage that I don’t.

Enter Last Blood, directed by Adrian Grunberg (Get the Gringo [2012]) and once again co-written by Stallone. I didn’t expect a fifth Rambo movie considering the long gap after Rambo (2008) and Stallone’s age (73 years), yet here we are and here Sly is, looking as if he could star in throwback action films for another decade. The movie’s strengths and weaknesses are comparable to previous series’ entries, but Last Blood is most similar in execution to its 2008 predecessor. Grunberg handles the mid-budget visuals, location-photography (e.g. The Canary Islands, Louisiana, Bulgaria), and action camerawork well with cinematographer Brendan Galvin. Much of the dramatic (re: non-shooting or stabbing) sequences are shot in close-up or extreme close-up with handheld cameras, giving the movie an almost European documentary feel, which is both distinct and odd. For those scrumptious action scenes, Grunberg embraces low-lit interiors and brisk close-quarters-combat (CQC) choreography during stealth sequences and bright outdoor lighting with quick, sharp editing during the explosive finale. Digital blood and gore are toned down from the 2008-sequel, which is appreciated.

Outside of the visuals, Last Blood features decent acting and dialogue for the stock characters, from Stallone’s eponymous lead to co-stars Yvette Monreal, Adriana Barraza, and Paz Vega to principle villains Sergio Peris-Mencheta and Oscar Jaenada. Anyone expecting much nuanced subtlety or narrative complexity needs to check their expectations at the franchise’s door, though I was pleasantly surprised at the dark futility of Stallone’s mission to rescue Monreal (spoiler alert, it doesn’t end well). The Rambo franchise, at its worst (e.g. Rambo II [1985] and Rambo III [1988]), has used its cartoonish, over-the-top action to preach, of all things, but Last Blood retains the morbid, downtrodden tone of First Blood (1982) and Rambo (2008), and is better for it.

Frequent complaints regarding this film have to do with its narrative simplicity, which I see as one of the film’s strengths, and a supposed racist or xenophobic attitude towards Mexico, which is understandable. The Rambo films have never been paragons of thematic complexity nor cultural understanding, but like the series’ bombastic action, that’s been a consistent feature, not a bug, of the franchise since the beginning. I’d argue Last Blood is another simple, straightforward, and yes, offensive action film in love with its carnage, and it’s obvious the filmmakers don’t care for saying much else. Whether you find that off-putting is hard to say given this movie’s and its parent franchise’s deliberate style, but unlike, say, Rambo II, Last Blood never preaches to its audience. 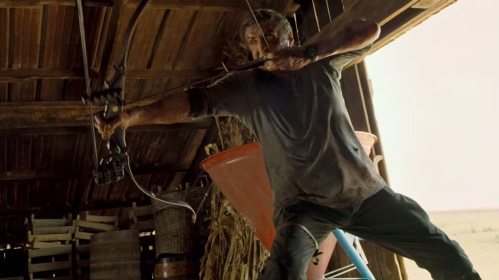 Stallone doesn’t use his signature bow much in Last Blood, but he does use it for the film’s best kill.

I don’t know how much Stallone has left in the tank for another 1980s-throwback action flick, but given his affection for the genre and his dedicated physical fitness, I doubt we’ve seen the last of him blowing enemies to smithereens. If Last Blood is indeed *the last* we’ve seen of his fabled Rambo character, I’d say the title and ending of this fourth sequel are as good as any on which to close the book, but then again I thought as much with the previous sequel. Stallone’s latest franchise revival is faithful to its series’ established formula without being a slave to it, and is successful due to its simple, self-contained story. Fans of Stallone’s work and action fans in general have no reason not to enjoy it. For the first time in a while, Last Blood had me leaving a movie theatre feeling I got my money’s worth — $9.75, to be exact.

SUMMARY & RECOMMENDATION: Blunt, brutal, and thematically straightforward in the extreme, Adrian Grunberg’s Last Blood finds the aging Sylvester Stallone embracing his cinematic legacy as much as he did in Ryan Coogler’s Creed (2015), for better and for worse. Both the film’s story and bloodthirsty carnage feel distinctly not of this age without indulging in nostalgia, which makes its box office success all the more surprising.

— However… no one who isn’t an action fan will find much to entertain themselves in Last Blood. At the same time, the film builds to a singular major set-piece a la Rambo (2008), so don’t expect a nonstop action extravaganza, either.

? You got to hand it to John Rambo. When he threatens to rip a villain’s heart out of their chest, he follows through on that threat, God damn it.