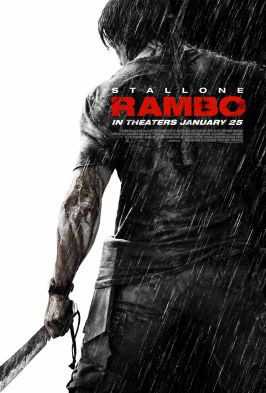 For a series that’s commonly referred to with sarcasm, condescension, and described as outdated 1980s action schlock that’s since become a parody of itself, it’s amazing how integrated the Rambo franchise (1982, 1985, 1988) has become in American culture and the global cinematic action canon as a whole. Whenever a character goes off the rails or loses all emotional control, going into a high-octane, action-packed, blood-fueled rampage, it’s regarded as “going Rambo.” Hell, even in videogames and in first-person shooters (FPS) in particular, fast-twitch action and shoot-em-up gameplay is referred to as “Rambo-style.” 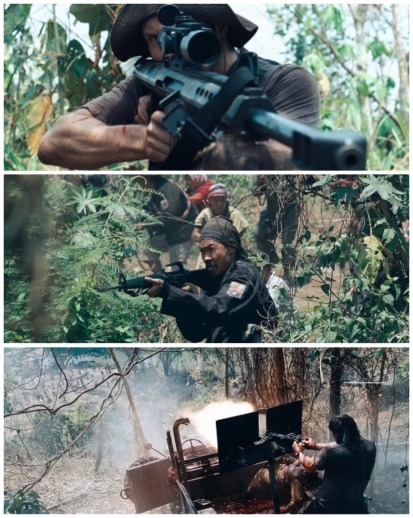 The ironic thing is that the franchises’ first film, First Blood, neither had the principal character’s name in the title nor was it a full-fledged action movie. It had that post-Vietnam War, angst-ridden, a creepy, forest-stalking vibe, and yes, Sylvester Stallone did indeed shoot things up with a heavy machine-gun, but as a whole the story was far more of a brooding, patient, psychological thriller than any kind of over-the-top, muscle-bound commando film. Only one guy died in the whole movie, and that was by accident! No, most of the series’ fame (or infamy, depending on who you ask), stems from the series’ first two sequels, both of which feature plenty of ridiculous action sequences involving Americans taking on those pesky Soviet forces (Vietcong in Rambo II, Spetsnaz special forces in Afghanistan in Rambo III). Fast forward to 2008 and we have Sylvester continuing his trend of resurrecting his iconic franchises from decades prior (e.g. Rocky Balboa [2006]) for a fourth film simply titled Rambo.

The shocking thing with this third sequel in a franchise, which is now, like The Expendables series (2010, 2012, 2014), surviving on nostalgia fumes from Generation X-ers, is how well it combines elements from both the franchise’s origins and its  over-the-top sequels. Rambo features plenty of violence, gruesome kills, and creepy Southeast Asian jungle-stalking, but its overall mood and message is as brooding and dark as First Blood, and then some.

That’s what Stallone’s passion-project has going for it: It understands all aspects of its franchise’s legacy and embraces them rather than trying to circumvent or apologize for them. Like The Expendables, this type of action isn’t for everyone and many will be flat-out shocked or repulsed by the final (amazing, brutal, breathtaking… ) shootout, but for what it’s worth Rambo’s new millennium update does exactly what it’s supposed to do. The benefit of modern action-cinematographic technology, combined with that now exceedingly rare, kill-everything-in-sight 1980s mentality yields incredibly potent action — again, if you’re into this sort of thing.

I myself enjoyed the patient buildup to the explosion of action at the end of the film. Much of the film’s likability stems from its captivating premise — the story starts with an aging, jaded John Rambo living a quiet, secluded life in Thailand. Eventually, a missionary group approaches him with the prospect of transporting them to Burma where they plan to provide humanitarian aide to victims of the Saffron Revolution. Rambo is apathetic and cynical before being prodded back into action, an aging but still lethal lion goaded into violence and retribution when evil necessity rears its head.

What’s shocking about this latest Rambo is how patient it is and how often the focus of the film expands beyond its titular character. Most of the film is dedicated to sneaking and slinking through the dense, muddy, humid jungles of Thailand, with brief, periodic spikes of ultraviolence that Stallone clearly loves teasing us with until the explosive finale. Additionally, Rambo doesn’t go at it alone this time around, as he’s joined by a relatively charismatic team of mercenaries who help him mow down the evil military oppressors and rescue the aforementioned missionary group whom inevitably get themselves captured. The only downside to all this patient storytelling and somewhat sparse action-buildup is that it takes a while to get to that stereotypical “Rambo”-action.

Which, thankfully, brings us to the best scene in the film, the much ballyhooed .50 caliber machine gun-sequence that pays obvious homage to the classic final shootout from Sam Peckinpah’s The Wild Bunch (1969). You could call the sequence too little too late for a film titled Rambo, but then again this movie is about summarizing all of the franchise’s legacy, including its best film. To that end, the .50 cal shootout is terrific and delivers every sort of cinematic carnage and hardcore violent imagery one could ask for in a movie. It’s fucking brutal and it looks amazing. 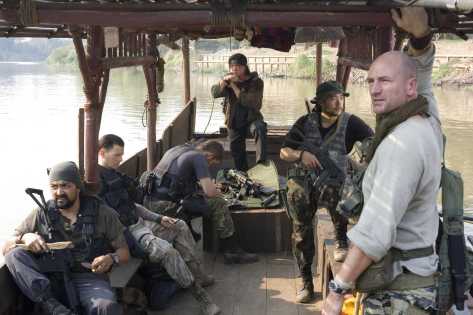 Rambo brings a crew along for the ride, this time. Though they can all kick ass, eventually the elder has to show the kids how it’s really done.

Wrapping the project in a nice, shiny bow is the ending, something that I wish Stallone would respect by not making Last Blood (though that is a fitting title). What Rambo provides is great closure for the series and Stallone’s legacy as a whole, even if part of that legacy is maintaining series well past their welcome and driving franchise names into the ground. In hindsight it’s amazing how the film was released in January (typically Hollywood’s dumping ground for really bad and/or unmarketable films) of 2008, which was the same year The Dark Knight (2008) and Iron Man (2008) debuted.

In the end though, it’s nice to see John Rambo return with a vengeance and go out on his own terms, even if — actually, because — he has to be prodded into action by a misguided call of duty. I’m not sure whether Last Blood will negate that or not, but as it stands now, the Rambo franchise exited stage right with its dignity intact and a sizable box office win. Sometimes, you just gotta go full-Rambo, and the people will pay to see that.

SUMMARY & RECOMMENDATION: While its action is less consistent and varied than The Expendables, Rambo has a much better script with good dialogue, likable characters, and a commando team worth rooting for. The film looks great and sounds even better, debuting some of the best-looking and sounding 1980s-style action ever seen or heard on the silver screen. The wet, sticky jungle foliage looks alive and the sweaty, dirty, grimy appeal of the gruesome action never fades. The final .50 cal-shootout is outstanding.

— However… several digital FX are distracting, and the endless anticipation for the full release of the over-the-top, name-brand violence grows taxing.

— RECOMMENDED. Stallone finds a way to balance the serious geopolitical content of his film’s story with the brash, brutal, and unrelenting style of his parent franchise’s gratuitous violence. That it congeals as well as it does is something of a miracle.

? These incredibly brave people have found kind of a voice, in a very odd way, in American cinema.