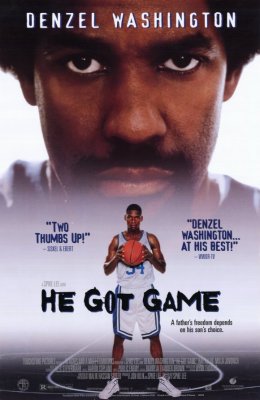 It doesn’t take a film student to notice that Spike Lee hasn’t been at the top or even near the top of his filmmaking game for a long, long time. His last critically acclaimed feature was the Edward Norton-starring 25th Hour back in 2002, and even his last successful mainstream crowd-pleaser, Inside Man (2006, his most commercially successful film), also starring Denzel Washington, released almost a decade ago. Much of his recent work has been under-the-radar, nearly forgotten straight-to-home-video projects or artistic and box office flops, like Miracle at St. Anna (2008) and the 2013 Oldboy remake. The once great trendsetting, sociologically groundbreaking African-American auteur visionary that is Spike Lee seems to have long since passed his creative peak.

Washington (right) tries to help Allen (left) learn from his past mistakes and become a better man than his father. Allen isn’t too keen to listen, and for good reason.

That being said, part of the reason his fall is so disappointing is that he had so far to fall. After creative and sociopolitically explosive powder kegs like the 1989 classic, Do the Right Thing, and then arguably his best film and one of the greatest biopics of all time, Malcolm X (1992), Spike Lee established himself as the epitome of racially conscious cinema and the greatest Black-American filmmaker of all time. No one since has come close to matching his influence.

Further empowering Lee’s legacy are many of his now overlooked classics from his later career before things got truly ugly. He Got Game is one of Lee’s best films outside the one-two punch that was Do the Right Thing (DRT) and Malcolm X (MX), as well as being one of his most introspective and emotional. Thematically, the film is an interesting contrast to DRT and MX in that it’s message is more covert, subtle, and quietly powerful as opposed to the latter two films’ thunderous cries of racial injustice and scathing indictments. While Lee has never been a heavy-handed director (one of his greatest strengths is knowing emotional restraint at the most crucial narrative moments), DRT and MX can be intimidating to viewers given their passionate material and particularly the latter’s length (MX was 200 minutes long).

He Got Game (HGG) is arguably just as effective at conveying its social commentary given how quietly it says it. Like Silver Lining’s Playbook (2012), HGG celebrates the healing, metaphorical power of sports to mend old wounds, build familial relationships, and provide invaluable escapism. The opening shots of the film consist of a variety of unnamed adolescents playing basketball in slow-motion throughout various parts of the country; Lee’s typical suave, almost jazzy orchestral music graces these moments and similar beautiful shots throughout the film, almost to the point where it gets annoying, but he always knows the right moments to hold back.

Much of the film’s observations of family ties, racial dynamics, and college athletics are told through hyper-charged physical moments of sex, drug-use, and slow-mo basketball like these, often in montage sequences. The fluidity of these rapid-fire edits and their placement between heartfelt character development sequences, character choices, and minimal exposition is admirable. Lee keeps his signature colorful visual style and good sense of humor, but chooses to crank the metaphorical volume down a notch in comparison to his most famous, more incendiary films. He says just as much by saying less, and that’s pretty darn cool…

Denzel Washington and Ray Allen’s performances are great, though they’re aided by Spike Lee’s great script and fantastic characterizations. Washington delivers like he always does, yet it’s Allen’s acting that’s truly a head-turner. Generally speaking, athletes make terrible actors (e.g. Michael Jordan in Space Jam [1996]) in comparison to, say, musicians or even unprofessional actors cast in arthouse films; and yet, Allen does an outstanding job here as a star high-school athlete with the entire world before him, including a complicated relationship with his girlfriend (a 19-year-old Rosario Dawson) and a contemptuous distance from his father, played by Washington. Allen’s arc is fantastic, and the bittersweet plot twist at the story’s end is one of the most mature, sober, yet uplifting climaxes of Lee’s career.

In a day and age when racially-conscious cinema is thunderously applauded and held up as “saviors of cinema” by the naive left and completely ignored by the ignorant right, it’s enlightening to look back upon Lee’s incredible body of work that set the ground for many of the Selma (2014), 12 Years a Slave (2013), and Fruitvale Station (2013) flicks of today. To date I have yet to see a movie by a filmmaker, black or white, who tackles the sensitive and complex topics of race in America, particularly African-American culture, as well as Spike Lee did in his heyday. That said, his films are so much more than mere preaching — they are pure cinema, through and through, and Lee’s unabashed tongue-in-cheek attitude and stylized visuals validate auteur theory every damned time.

SUMMARY & RECOMMENDATION: Lee interweaves gorgeous scenes of basketball with stylized montage and intimate character growth to great effect. His lead characters in Ray Allen’s Jesus Shuttlesworth and his father, Denzel Washington’s Jake Shuttlesworth, grow in the film and on us in completely different ways. Allen and Washington give powerful yet subdued performances that epitomize the film’s running theme of manhood and moving on, and together they create one of the most memorable father-son relationships in decades.

— However… Washington’s relationship with Milla Jovovich’s character is a subplot that should’ve been cut. We’ve seen this sort of hooker-love story countless times before and Lee adds nothing of note to it.

? Let me tell you something son, you get that hatred out your heart, or you’ll end up just another nigga, like your father.