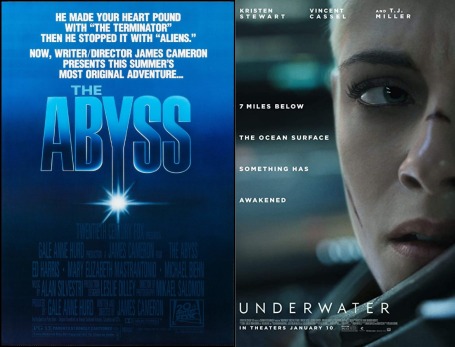 When I was a kid, one of the few activities at which I was skilled was competitive swimming. As such, I’m drawn to stories about water and characters defined by life around it, despite growing up in the Midwestern United States, hundreds of miles from the nearest major freshwater bodies (e.g. The Great Lakes) and thousands of miles from the nearest ocean. Two movies, one recent and one now considered a cult classic, exemplify filmmakers’ similar interest in the power of aquatic environments as a storytelling device: James Cameron’s 1989 Abyss and William Eubank’s Underwater, the latter released this year prior to the COVID-19 outbreak. Both films pay obvious homage to science-fiction thrillers of the past, including Alien (1979; Cameron himself directed that film’s first sequel, Aliens [1986]), and 2001: A Space Odyssey (1968), and both films’ diegetic style and primary character development are defined by their marine environments.

Abyss, often heralded by sci-fi fans as one of the better films of the 1980s, and respected as a showcase for one of the first significant computer generated imagery (CGI) FX on film, draws less name recognition when referenced by general audiences, today. I consider Abyss to be the forgotten middle-child of Cameron’s filmography, far less recognizable than genre classics like Terminator (1984, 1991) or Aliens, yet also not as widely appealing as his more mass audience-friendly pictures like True Lies (1994), Titanic (1997), or Avatar (2009). It was the last Cameron film I watched (save for the schlock classic, Piranha II: The Spawning [1982], which I have not yet seen), and remains the lone film of his not to have received a Blu-Ray release as of this writing (August 2020).

Top: Mary Elizabeth Mastrantonio (second from right) and Ed Harris (far right) witness a CGI miracle in Abyss‘ second act. Bottom: Harris tiptoes to the edge of the Cayman Trough with a remote submersible in hand.

The basic premise of Abyss concerns a collaboration between an underwater drilling team and the United States Navy to recover an American nuclear submarine, which has sunk for reasons unknown, amidst Cold War tensions with the Soviet Union. The bulk of the film involves this collaboration going awry as inclement weather causes the deep sea rig to deteriorate, which dovetails with revelations surrounding the submarine’s mysterious demise. Top to bottom, Cameron delivers another captivating sci-fi yarn that takes advantage of its unique, ambitious production-design. The logistic and engineering nightmare that was the film’s principal photography is the stuff of legend, further cementing Cameron’s status as a dictatorial, uncompromising director who pushes his cast and crew to the edge with every feature. The underground and manmade tank sets are immaculate, allowing for a seamless blend of practical and digital FX with impressive live-action stunts both in and out of water. In addition to the convincing set-pieces, most of which involve characters narrowly avoiding drowning, the impressive set-designs and FX maintain an ever present mood and near suffocating tension. Abyss cements the iconic sci-fi action style of Cameron’s filmography, his charismatic yet intimidating affection for smokey, metallic, industrial mazes. Adding thousands of gallons of water on top of that visual style only accentuates his directorial strengths as a genre filmmaker.

A direct descendant of Abyss is 2020’s Underwater, directed by relatively young genre filmmaker, William Eubank, who rose to prominence with similar minimalist or throwback sci-fi pictures Love (2011) and The Signal (2014). Underwater is his most expensive feature yet, by far, as well as the first without his writing credits, allowing for a more conventional genre film that nevertheless feels unique amidst the bloated, digital FX-heavy blockbusters of today. It is fitting that this throwback homage to both Alien and Abyss was the final theatrical release under 20th Century Fox before the studio was absorbed by the expanding monopoly that is Walt Disney; it’s unambitious by contemporary high-concept filmmaking standards, yet admirable in its streamlined focus and straightforward genre tone.

Modern filmmaking technology and a tight running time (a brisk 95 minutes) were unable to save Underwater from becoming another off-brand box office bomb, yet these elements keep the plot moving at a reasonable pace without feeling rushed, and still allow for a patient, deliberate reveal of the film’s cryptic antagonists. Bolstering this streamlined genre framework is a much better than expected cast, including an understated lead performance by Kristen Stewart (not counting her bad narration; see below), veteran costar Vincent Cassel, halfway decent comic relief from T. J. Miller, and surprisingly effective minor castmembers Jessica Henwick, John Gallagher Jr., and Mamoudou Athie. The range of personality of the cast and their effective chemistry elevate this B-movie above the countless Alien and Abyss-clones produced since the 1980s.

These movies’ weaknesses concern a significant miscast role in Abyss and a couple on-the-nose voiceovers by Stewart in Underwater. With regards to the former, Cameron filmmography-staple, Michael Biehn, doesn’t have the range to play a great villain, and I found his performance hamfisted compared to the rest of the cast, wishing instead he had switched roles with the more versatile Ed Harris as the film’s lead. As much as I like Biehn in The Terminator, Aliens, and even lowbrow schlock like Michael Bay’s The Rock (1996), casting him as a bad guy is like making Jeremy Renner into a comic book villain. It just isn’t convincing. Likewise, Stewart’s narration feels like a crutch in place of a brief prologue or creative visual exposition that Underwater was unable to execute. Her ending voiceover, in particular, and several environmental details talk down to the audience during the movie’s conclusion.

Kristen Stewart encounters… something in the depths of the Mariana Trench in Underwater.

Altogether, James Cameron’s Abyss and William Eubank’s Underwater represent a filmmaking style of mainstream cinema’s bygone era, at least with respect to major studio theatrical releases. I’m hopeful, as both a hard science-fiction fan and a lifelong aquatic enthusiast, that burgeoning streaming platforms will encourage the return of likeminded, moderate-budgeted marine adventures, much like the current resurgence of hardcore action films (e.g. Extraction [2020], The Night Comes for Us [2018]). Abyss is somewhat unknown outside of genre fans, despite its ambition, while Underwater may have limited appeal with less forgiving audiences, as it did with critics, thanks to its derivative nature. That being said, both are worthwhile creature-features and environmental disaster pictures, taking advantage of smart production values and overall strong casts. Like their obvious classic influences, these are B-movies done A.

SUMMARY & RECOMMENDATION: Boasting solid FX, impressive set-designs, and better than average characters, both Abyss and Underwater continue the legacy of Alien and 2001 with pride. Their stylistic identity may return in other forms with the changing guard of broadcast television for streaming services, but until that day, these types of aquatic adventures are an endangered breed in light of 20th Century Fox’s absorption into Walt Disney.

— However… Michael Biehn is built for scrappy underdog characters, not conniving villains, while Kristen Stewart should never be asked to narrate anything.

? How many drilling stations come with a protocol to overload their power sources?