//
you're reading...
Other, Political Rants 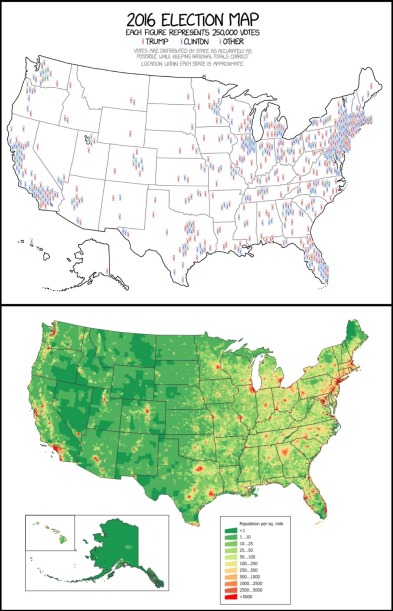 Given how my occasional tangents into politics are often dark and brooding, I’m going to discuss something more positive and upbeat today, all while still taking underhanded jabs at people I don’t know and offending most viewers. Then again, today’s topic isn’t so much “political” as it is demographic or cultural. Given how much of my love of film is domestic (most of the films I like are American productions), how prolific American culture is, and how frequently it is exported overseas, I thought it amusing to summarize the bite-size, surface-level touchstones (re: stereotypes) of my country that have become popularized as a result. One could consider this a tongue-in-cheek riff on tourist guidebooks for those who wish to visit the United States, particularly those curious enough to experience its latest version in this brave new world of mobbed up reality television hosts as presidents. Enjoy the following delineations of my homeland as distinguished by region and population density:

Along with the West Coast (see below), this is the region of the United States with which most foreigners are most familiar, at least in a superficial sense via pop culture and with regards to urban metro-areas. Cold, forested, and descended from 17th century New England Puritans, the American Northeast is the business and financial hub of the USA. The region’s powerful state and local governments, coupled with the seat of the federal government (Washington DC) and relatively high population density, make this area the most similar to Europe and the rest of the West. –> The green region on the map below, though I would add Maryland, Delaware, and the entire Washington DC metro area.

Cities = Examples include the entire Northeast Megalopolis (Boston, New York, Philadelphia, Baltimore, DC). These people are the fast-talking, fast-walking, uppity, ethnically diverse cosmopolitans you see in all kinds of movies, television shows, and mainstream American news media. Numerous ethnic and recent immigrant enclaves are nestled within these areas, and are often non-American tourists’ first stop Stateside. This is a good introduction for first-time visitors to the USA, given the cosmopolitan segue-way into American culture, ease of travel, diversity of American immigrant food, ubiquity of public transportation, and likelihood of familial connections. Please note, however, that sampling the urban Northeast and/or West Coast only to leave the US afterward is akin to thinking all of Indonesia may be encapsulated by Jakarta, Russia by Moscow, the United Kingdom by London, or India by Mumbai or Delhi. Feel me?

Country = Overshadowed by its dominant, world famous urban counterpart, the rural Northeast consists of eclectic, laid back small towns nestled in dense forests atop rolling hills. The idyllic woodlands, pleasant atmosphere, and relatively conservative yet unassuming people are a scenic contrast from the overwhelming East Coast big cities. It’s a nice first step outside urban America after visiting New York or DC, and an introduction to so-called Middle America.

SOUTHEAST: THE LAND OF HOSPITALITY

Known for its stark cultural conservatism, humidity, and ethnic conflicts, the Southeastern United States has been either fairly or unfairly maligned, depending on whom you talk to, as the racist, gun-toting, redneck backwater version of America, the yin to the urban Northeast’s yang. As a native small-town Midwesterner (next up!), yet also a snobbish liberal, I’m somewhat in the middle of derision and romanticism of the culturally rich, controversial American South. For those adventurous tourists looking for more “off-beat” cities or “purebred Americana” and to avoid the fun but cliched tourist traps of the Northeast, proceed to this charismatic side of the American experience. –> The orange region on the map.

Cities = Examples include Savannah (Georgia), New Orleans (Louisiana), Nashville (Tennessee), Tallahassee (Florida), Birmingham (Alabama), San Antonio and El Paso (Texas). These cities, plus a few others, are Southeastern metro areas that are regionally unique (distinct?) and the least cosmopolitan, unlike, say, the bland Atlanta (Georgia), Houston (Texas), and many Floridian cities. Whether you want to experience live country music (Nashville), experience a cultural mishmash of Francophone Catholic Creole with unsettling Caribbean slave lord legacy (New Orleans), or visit the distilled arrogant independence of the American spirit in San Antonio, Southeastern cities have nothing if not flavor.

Country = As memorable as their urban counterparts, if not more so, my affection for the Cajun subcultures of Louisiana, the cowboy ranching lifestyles of rural Texas, and the tranquil antebellum landscapes of Georgia are based in their distinct geopolitical personality. Those looking for stereotypical non-rhotic Southern Drawls (e.g. y’all, Oh mah Lawd I do declare… ), rampant gun culture, and racism need look no further. The rural Southeast is far more ethnically diverse than the rural Northeast or Midwest, and is also more interesting in terms of geography, foliage, and wildlife, in my opinion. Not to mention, Cajun creole and Tex-Mex cuisines are so ubiquitous that you don’t need big cities to eat well. Even your average fried chicken joint kicks ass.

As a native of this area, specifically the rural part, I feel the least comfortable speaking of its stereotypes and/or appeal to outsiders because I’m so close to it… but I’m gonna take a shot at it. Endless flat farmlands and hot, humid summers await. –> The blue region of the map.

This is the region least familiar to and least visited by international travelers, students, and professionals. While the Northeast or West Coast is first on everybody’s list, the Southeast is generally considered the most “exotic,” and the Southwest/Rocky Mountains receive much contact from Latin America and outdoors enthusiasts, the Midwest is, well, the forgotten middle child of the bunch. There’s trade and commerce with our northern friend, (Oh… ) Canada, via the Great Lakes, but that’s about it. Yet, we’re gonna talk about it anyway, because I said so.

Please note: I separate the Pacific states into the “West Coast” and include Delaware, Maryland, and the DC metro area as part of the Northeast. Again, this compartmentalization is a matter of opinion, but I’m right.

Cities = Given the blandness of the region at large, I’m not much of an advocate for Midwestern cities. Culturally speaking, cities like Detroit (Michigan) and Chicago (Illinois) have more in common with the Northeast, much like Atlanta, whereas cities like Indianapolis (Indiana), Cleveland (Ohio), and Madison (Wisconsin) are too decentralized to feel urban to most people. That being said, Saint Louis (Missouri) has notable historical monuments if you can stand the heat and avoid the crime, Chicago has great food and architecture while being less obnoxious and stressful than, say, New York city, and “The Twin Cities” of Minneapolis-Saint Paul (Minnesota) have arguably the most identifiable Midwestern flavor (friendly people, eclectic German/North European ancestry, notable urban wildlife) if you can stand the cold.

Country = Almost certainly the last parts of America that non-Americans will ever see, the rural Midwest is most similar to the rural Southeast, minus the obnoxious country music and on-the-nose racism. It’s also the whitest part of the US, as fate would have it, not to mention the flattest. The rural Midwest is home to seemingly endless expanses of corn and soybean farms, so if you’re used to tight-knit island communities, forested hills, or city living in general, I suppose this may sound exotic.

The western portions of the United States have less defined regional boundaries compared to the eastern half of the US, so my loose definitions of the American Southwest, the Rocky Mountain states, and the Pacific West Coast may not fit with other popular definitions. That being said, identifiable cultural and geographic characteristics of the “Southwest & Rocky Mountains” include an embracing of the untamed American landscape. The US federal government owns much of the land of this region, hence its vast undeveloped natural areas and prevalence of charismatic national parks, monuments, and wildlife refuges. —> The red part of the map, minus the states of Washington, Oregon, and California.

Cities = Most cities in the Southwest and Rocky Mountains are dominated by either retirees or younger educated professionals from elsewhere. As such, cities like Denver (Colorado), Tuscon (Arizona), and Albuquerque (New Mexico) are rapidly developing and some of the fastest growing cities in the US. These cities don’t seem to have much in the way of identity, like most Midwestern urban areas, but on the flip-side are part of America’s demographic future, rather than its decaying, bankrupt past (see Cleveland, Detroit). Maybe you’ll have familial or friend options with whom you can crash while you visit the way more interesting countryside…

Country = Speaking of which, the rural (re: mostly uninhabited) areas of the American Southwest and Rockies are some of the most beautiful in the entire country. Those who enjoy hiking, camping, mountain climbing, skiing, and/or want to try American outdoor staples like hunting, fishing, or target shooting will be kids in a candy store. As far as scenic vistas, wildlife diversity, and libertarian communities go, the American Southwest and Rocky Mountain culture is arguably the mecca of the developed world.

WEST COAST: FUN IN THE SUN

And so we return to a region of the United States non-Americans have actually heard of. Home to a plethora of Latin American, East, and South Asian immigrant communities, the American film industry, Silicon Valley, and a scenic Pacific coastline, the US West Coast is as identifiable as New York city. If you hail from any part of Asia or Oceania, this is where you enter the USA. —> The red part of the map not described above.

Cities = Like the Northeast, the Pacific Coast is dominated by its sprawling urban areas, none more notable than the Northern and Southern California megalopolises based around San Francisco and Los Angeles, respectively. Also like the urban Northeast, urban West Coasters in general but urban Californians in particular are uppity bastards, though noticeably friendlier and with a lesser sense of humor. You don’t need me to tell you to visit these places, for the record.

Country = Not much is known about these mysterious rural parts of Washington, Oregon, and California, save for the fact they’re the setting for Jeremy Saulnier’s Green Room (2015), and that one time a bunch of armed rednecks took over a local wildlife sanctuary.

The independent outliers of the USA, Hawaii is America’s slice of tropical Polynesia we never deserved, while Alaska is as cold, rugged, and brutal as the most remote parts of Canada. Both are outdoor adventures in the vein of the Southwest and Rockies, but even more remote. Visiting these places will put you ahead of most US citizens, and no tourist I have ever met, American or otherwise, has ever spoken ill of either place.