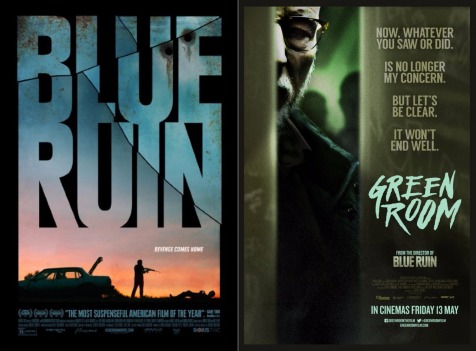 I’m a big fan of hardcore violence in cinema. When it’s not sloppily executed or gratuitous, I appreciate how filmmakers embrace the brutal tension and aesthetic macabre of cinematic carnage. Maybe that’s because I’m a crazy person, I have a really boring life outside of watching movies, or I just have developed a sharp taste for the intensity of action films and crime dramas over my lifetime. At least two of those three statements are true.

As such, Jeremy Saulnier may be a young, up-and-coming director for me to watch in the years ahead. I am late to the Blue Ruin-party, one of the most lauded films of 2013, but I managed to catch his latest feature, Green Room, in theatres just last week. Neither film is for the feint of heart, and both are extraordinarily violent, but Saulnier knows how to weave violence and gore as storytelling elements unto themselves. Every horrific act of murder advances the story, if not also informing the central characters and establishing brooding, malevolent tones throughout both films.

Let’s analyze them, shall we?

This thriller, at first glance, portrays itself as a by-the-numbers revenge film. Our lead character, Dwight Evans (Macon Blair), receives news of his parents’ alleged murderer being released from jail, and proceeds to track down the former convict and kill him. But then, he murders him… 25 minutes into the film!

As it turns out, BR’s revenge-“plot” is in fact the set-up for the true narrative of the film, which is the attempted survival of Dwight from the fallout of his successful revenge, namely the equally vengeful family members of his parents’ murderer. Where most revenge-flicks end, BR expands and elaborates until its inevitable bloody conclusion. The film’s main themes of the pointlessness of revenge and the inherent sectarianism within all humans are hardly novel, yet its setup and execution of this thematic analysis are captivating and innovative. Its creative choice of story is just the beginning.

BR stages its brutal murders in intimate close-up, emphasizing both the carnage upon the victim and the emotional toll upon the attacker. The murders themselves are not stylized in any way, yet blood squibs are free-flowing and appear to be entirely practical. Most of Dwight’s story plays more like a survival film than a revenge-tale or even your standard crime drama. Neither Dwight’s family nor his enemy’s (the redneck, gun-toting Cleland’s) are associated with organized crime, but rather a sort of modern play on the Hatfield’s-and-McCoy’s.

The film also benefits from a plethora of great low-key lighting and nighttime cinematography, under which most of the extreme violence takes place. It’s not quite at the level of Sicario’s (2015) near pitch-black cinematography (courtesy of Roger Deakins), let alone The Revenant’s (2015) all-natural lighting (from Emmanuel Lubezki), but it’s up there.

My only complaints with the film are the somewhat cartoonish portrayals of the antagonistic Cleland’s, as well as some occasional time-expanding monologues from our protagonist. Given the Cleland’s implied affluence (they maintain a limousine service and a comfortable country home) and apparent lack of mafia-connections, their inclination to extreme violence and willingness to take the law into their own hands is somewhat unbelievable. Plenty of Americans maintain private armories (for the edification of my non-American or urban American readers, who may be curious), but given the white-trash, redneck, survivalist portrayal of Dwight’s opponents, other aspects of their lifestyle and social connections seem odd. Dwight’s irritating habit of talking when he should be shooting is also a head-scratcher.

That being said, Blue Ruin is the rare, powerful revenge-tale whose narrative moves well beyond its principle revenge. At the same time, it avoids the hamfisted pitfalls of otherwise similar films whose preaching of inept revenge tends to fall on deaf ears.

One of the few films more intense than Blue Ruin is Saulnier’s followup, detailing the horrific aftermath of a small-time punk rock band who stumbles upon a murder at a club owned by skinhead Neo-Nazis. Much like Blue Ruin, the initial bloodshed is little more than the catalyst for the intense, violent survival story that follows.

The remainder of Green Room feels like a horror film, in that the principle characters are picked off one-by-one in increasingly gory and painful ways. Low-key lighting dominates, as most of the story takes place at night as the rock band (and one unlucky female white-supremacist) attempt to survive the slow, calculating attacks of the skinhead club owners. Sound design is excellent, making use of everything from machete slices to shotgun blasts to microphone feedback. All things considered, the technical ambiance, production values, and tonal cues of GR are so effective that its terrific use of limited locations draws comparisons to The Raid (2011).

Acting highlights include Anton Yelchin and Imogen Poots as our band leader-protagonist and the aforementioned female club-goer, respectively, as well as a surprising dark turn by Patrick Stewart as the head Neo-Nazi. The running theme of GR’s characters are their generic normality and inept, clumsy attempts at ultraviolence. On the one hand, this heightens the realism of the conflict at hand, but on the other, the cast’s dedication to realism can be frustrating in the stereotypical dumb horror movie-character sort of way. That being said, the fact that our band of misfits put up quite a fight against these despicable skinheads till the bitter end makes the dark, cynical climax feel earned.

GR isn’t as innovative or introspective as BR, but I’d argue it uses its simpler premise and limited locations to its advantage — again, in comparison to The Raid. The film is vile and violent and utterly relentless at times, but never is it gratuitous or exploitative. How it manages that tonal balance and creates characters worth rooting for, despite said characters’ intentionally forgettable personalities, is an impressive feat of screenwriting, genre-blending, and effective performances. It’s a brutal but unforgettable ride.

Whether Jeremy Saulnier rounds out these similar looking, sounding, and feeling films with a third ultraviolent, ultra-dark chapter a la John Carpenter’s “Apocalypse Trilogy” (1982, 1987, 1995) is anyone’s guess. As it stands, Blue Ruin and Green Room are a one-two punch of inventive thrillers, two great case-studies of how to transcend genre definitions with relatively one-note characters and subversive narratives.

In other words, both films are brilliant examples (also like Carpenter’s Apocalypse Trilogy) of the power of smart screenwriting and cinematography over big-name actors and flashy overacting. Blue Ruin and Green Room forgo conventional crime drama cliches, hamfisted revenge-narrative themes, and comic relief, and both pictures are better for it. Rules are made to be broken.

SUMMARY & RECOMMENDATION: If you’re depressed or ready to, ahem, get down with the sickness, Blue Ruin and Green Room will fulfill your depraved, sadistic cinematic urges with greater efficiency than Seven (1995) or Sicario. These ain’t no date-movies, that’s for sure, but if you’re ready for them, they’ll bring out the hardcore cinephile in you. Besides, who doesn’t want to shoot at murderous hicks or fascist Neo-Nazis?

— However… the characters’ relatable ineptness is distracting at times, regardless of realism. BR’s antagonist are an odd bunch, and GR’s Patrick Stewart could’ve been given more to do given his sheer dramatic range.

? Will the next film be called “Red Kitchen?”