‘The Many Saints of Newark’ (2021): Never Had the Makings of a Varsity Athlete

The Sopranos (1999-2007), created by David Chase for HBO and helmed by the now legendary performances of James Gandolfini, Lorraine Bracco, Edie Falco, Michael Imperioli, Dominic Chianese, et al., is one of my favorite television series; it has been credited with establishing HBO as the modern benchmark for quality cinematic television, as well as paving the way for the 2010s-2020s era of “Peak Television.” Thanks to The Sopranos — and, to a lesser extent, the likes of Sex & the City (1998-2004) & The Wire (2002-2008) — HBO popularized the concepts of long-running cinematic projects organized around complex yet often amoral characters; the network embraced explicit violence and sexuality on the small screen, utilizing diverse, multi-layered cinematography and subtle editing to enhance the single-camera setup of television storytelling. Thanks to these HBO innovations — again, led by Chase and company’s work on The Sopranos more than any other show — the current Golden Age of Television has produced and will likely continue to produce cinema superior to the average theatrical film from the 2000s to the present. As Jay Bauman once remarked, “[Many] people are choosing to just watch shows [now]… because most shows are better than most movies!” We owe much of that current phenomenon to the success of The Sopranos. 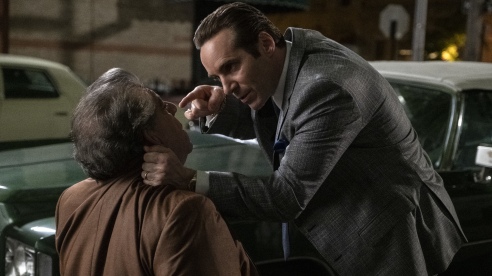 Lead Alessandro Nivola has a polite conversation with an associate about an outstanding loan before a drive-by shootout interrupts them.

Cut to Alan Taylor and David Chase’s The Many Saints of Newark fourteen years later, one of Warner Bros.’ 2021 feature-films scheduled for “day and date” release in both theatres and on the studio’s burgeoning HBO Max streaming platform, a fitting strategy for a feature-length prequel to the quintessential HBO drama. Its title is a reference to the surname of Imperioli’s Christopher Moltisanti (“Moltisanti” = Italian equivalent of “many saints”) from the show, as well as Alessandro Nivola’s lead in the prequel, Richard “Dickie” Moltisanti, Christopher’s often referenced but never before depicted father. The Many Saints details the evolution of the North Jersey Italian-American mafia in the 1960s-1970s, focusing intermittently on younger versions of characters from The Sopranos and various concurrent historical events (e.g. the 1967 Newark race riots), despite the distant, often tangential relationships between them.

Therein lies the single biggest problem with this feature-length prequel to one of the more popular television shows ever made: Its inconsistent, indecisive narrative focus. Throughout its modest, 120-minute runtime, The Many Saints feels like it can’t decide where to place its dramatic lens, be it on the formative years of the North Jersey mafia, centered around the Soprano and Moltisanti families, or the broader sociopolitical drama of East Coast America during the Civil Rights Movement and the Vietnam War. Major sections of the film follow Leslie Odom Jr.’s African-American mafia associate, who later becomes semi-radicalized by the Black Power movement and establishes a separate black-led criminal enterprise. Though interesting as a separate story, Odom Jr.’s arc doesn’t add much to Nivola’s or the familial drama of the North Jersey mafia beyond a bland love-triangle. Scenes that focus on the Moltisanti and Soprano families are funnier and more entertaining, but they have little structure or forward pacing to them, implying David Chase struggled to adapt his telewriting experiences on the Sopranos series to this Sopranos movie. The narrative meanders from one plot-point to the next with occasional interruptions from Odom Jr. until Nivola is (mild spoilers… ) murdered by a major character from the show with little to no reasonable motivation.

The upsides to The Many Saints of Newark are few and far between, but its greatest strength is Alan Taylor’s direction. Taylor cut his teeth on HBO shows like Sex and the City, The Sopranos, and Game of Thrones (2011-2019), so this latest collaboration with Chase feels appropriate following his lackluster Hollywood directorial experiences with Thor 2 (2013) and Terminator: Genisys (2015). With low-key, ominous lighting and stylized tracking shots throughout, Taylor’s direction here feels more reminiscent of his HBO work than his Hollywood features, which is appreciated. His direction of the entire cast is admirable as well, given the dynamic range of performances mined from a stellar cast that includes Michela De Rossi’s female lead, Jon Bernthal, Vera Farmiga, Ray Liotta, and Michael Gandolfini, the latter as a younger version of his father’s character, Tony Soprano himself, from the show. These performances are all memorable, and the cast’s collective chemistry, so effective, I feel their performances would’ve worked better in a limited series format where their characters could breathe.

Leslie Odom Jr. observes the aftermath of a race riot in a Newark commercial area.

At the end of the day, that’s what’s most frustrating about this Sopranos prequel film: Why the powers that be thought they needed to confine a Sopranos backstory to a two-hour feature format. I understand this project was commissioned prior to Warner Bros. committing their entire 2021 theatrical lineup to a hybrid theatre/HBO Max release, but the story of The Many Saints of Newark is unworkable as a traditional movie. Like many disorganized, poorly executed dramas before it, David Chase and Alan Taylor’s latest project tries to straddle the world of theatrical and Peak TV filmmaking and works in neither. Fans of the series on which this film is based will be disappointed by its shallow, discombobulated nature, while those new to the franchise won’t appreciate the countless narrative references and callbacks throughout.

SUMMARY & RECOMMENDATION: “Remember when” is the lowest form of conversation, as evidenced by the nonsensical, messy structure of The Many Saints of Newark. David Chase can’t seem to decide what type of story he wants to tell, and that indecision lets down Alan Taylor’s competent direction and a great cast. Leslie Odom Jr.’s subplot in particular feels like it belongs in another movie.

—> NOT RECOMMENDED; I remain baffled at this film’s lukewarm critical reception and even more so at the thought that Chase thinks he’s written some sort of “artsy,” mature reflection of New Jersey organized crime in the Counterculture Era. He’s a God damned hothouse flower, that’s his problem…

? When exactly did “pinky-swears” become a thing, and is their use in this film anachronistic?