//
you're reading...
Other, Political Rants

In light of the most recent attacks on French cartoonists at Charlie Hebdo for what was most likely “retaliation” for parodies of religious figures throughout the years, I decided to write one last post summarizing my thoughts on this sort of violence against artistic expression and free speech. The matter of whether or not we should actually be afraid of these types of people is a political discussion for another day, and to that end whether or not Christians, Muslims, Hindus, Westerners, non-Westerns, religious folk, or non-religious folk are actually “threatening” or “scary” or dangerous to a civilized way of life are beside the point. What is a matter of importance during and immediately following these acts of sociopolitical violence is our response to it. How must normal, reasonable people (i.e. the vast majority of society) respond to these random acts of horror?

I argue, as have many people before me, that the worst thing we can do is give in to the demands of madmen offended by whatever it is they may be offended. The least appropriate response to violence against a cartoonist, a film producer, or journalist for expressing themselves is causing a huge uproar, letting paranoia constrict and paralyze a populace, and especially stifle or censure the objects originally deemed “offensive” to the attackers in the first place. Carrying out these actions is giving the attackers, the bullies, what they want and allotting them far more respect and power than they deserve.

When our entire society stops moving, reacts with violence in kind, and/or sacrifices our own essential freedoms in the naïve hope of some guaranteed “safety” (e.g. The Patriot Act, The Interview’s [2014] interrupted release, South Park’s “200” and “201” censured episodes), we aide the extremists’ goals. To become terrorized and overreact is exactly what they want. Responding with fear and paranoia encourages the crazies to repeat these kinds of violent acts or threats in the future, because they now know that there’s a good chance they’ll get what they want. As South Park put it:

KYLE: “You see, I learned something today. Throughout this whole ordeal, we’ve all wanted to show things that we weren’t allowed to show, but it wasn’t because of some magic goo. It was because of the magical power of threatening people with violence. That’s obviously theonly true power. If there’s anything we’ve all learned, it’s that terrorizing people works.”

JESUS: “That’s right. Don’t you see, gingers, if you don’t want to be made fun of anymore, all you need are guns and bombs to get people to stop.”

SANTA: “That’s right, friends. All you need to do is instill fear and be willing to hurt people and you can get whatever you want. The only true power is violence.”

People who believe that certain essential liberties must be sacrificed in the name of public safety deserve neither liberty nor safety. Sure, some frivolous activities or personal freedoms that actively harm others or the greater community (like, say, killing people who disagree with you….) should and generally are restrained or partially restricted in most secular, civilized societies. There are in fact some restrictions on freedom of speech, as there should be. In most western countries, slandering someone or committing libel is punishable by law, hate speech is either restricted or outlawed entirely, and we can’t yell, “Fire!” in a crowded theatre however much fun it may be. These are reasonable compromises on the extent of personal expression that safeguard the livelihood of the community and personal freedoms of others. Outlawing political, social, or political satire because it makes people feel uncomfortable is not. 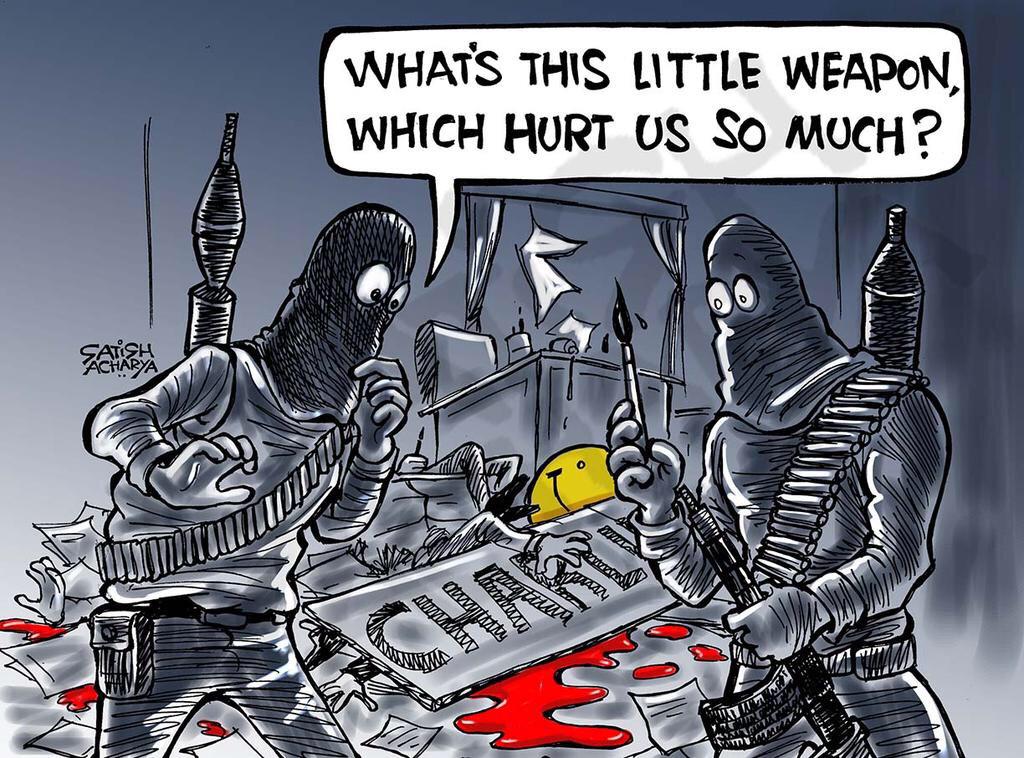 What indeed, Charlie, what indeed.

Forcing others to abide by your own  philosophical outlook on life, coercing others to respect your religious or political ideals as you do, is not an essential right of your own personal freedom —- it is limiting the personal freedom of others. You love Ronald Reagan and think he’s an American social conservative-Renaissance man? Fine, but just because you adore him doesn’t mean I can’t make a skit parodying his abysmal War on Drugs campaign or how he helped started a trend of hyperbolic wealth inequality in this country. You’re a devout Muslim or Christian who reveres the Prophet Muhammad or Jesus Christ? That’s great, but I can still draw a cartoon of either of them doing whatever the fuck I want them to do. Me commenting on, parodying, or criticizing other people’s beliefs is not harming other people, however uncomfortable it may make you feel. If I yell “Fire!” in a crowded public space in an effort to stir panic (terror?) and a stampede ensues, my personal “expression” is actively and directly harming and limiting the well-being of others —- me drawing a racy picture of Muhammad or Krishna or Reagan or whomever is not. Making people uncomfortable, disagreeing with others, or just trolling people in general is not an attack on other people’s livelihoods; at worst, it’s just being an asshole, and most citizens in most civilized societies agree that people have the right to be assholes.

As such, limiting people’s ability to troll, joke, or goof around out of fear of violence or even non-lethal legal repercussion is such an archaic, out-of-date, hopelessly draconian action that it’s absurd how many people in this day and age still think it’s a semi-acceptable thing to do. Venture not too far outside the West and you’ll run into myriads of otherwise normal, non-extremist people who think outlawing certain types of art and press is OK if it ventures into the vaguely defined and always-metamorphosing boundaries of “socially offensive material.” Part of the idea of freedom of religion, which most people of all faiths tend to agree is a good idea, is that we all don’t necessarily have to respect the same arbitrary spiritual and ritualistic dogma you do. It’s not limited to myself choosing to be an official member of this faith or that, but rather I have the ability to take seriously all that I wish and sneer at all that I don’t. You think that me writing a play about Jesus being a homosexual is offensive? Well too bad! It’s not harming you or stopping you from worshiping your faith, but you attempting to stifle my ability to voice my own opinion or create my own artistic projects is limiting me from realizing my form of emotional peace, my own intellectual well-being, my own philosophical expression of fun and freethinking, if you will.

This is the key difference: Trolling or satirizing others may cause personal annoyance or “offense,” but it does not harm others or limit the ability of others to voice their own opinions. Me making fun of Muhammad does not prevent someone else from worshiping Muhammad, but someone else threatening to kill me or actually going through with it does prevent me from either taunting, worshiping, or doing anything in relation to Muhammad. Personal expression is simply allowing everyone to have their voices heard, while censorship, threats, or physical violence is the silencing of those voices.

Let’s discuss a somewhat unsettling but appropriate cinematic analogy to what’s been going on of late with The Interview (2014), South Park, and several European artists over the past few years: In Christopher Nolan’s The Dark Knight (2008), Bruce Wayne (Christian Bale) and Alfred Pennyworth (Michael Caine) have a striking conversation early on in the film over recent declarations by one lunatic named The Joker (Heath Ledger), who has threatened to kill people each and every day until Batman reveals himself and turns himself in.

Does this toying with public emotions, group psychology, and societal terrorizing sound familiar? Bruce Wayne contemplates early on before things get truly bad that he can deduce The Joker’s modus operandi on logic alone, to which Alfred responds in the following exchange:

Bruce Wayne: “Criminals aren’t complicated, Alfred. I just have to figure out what he’s after.”

It’s not about money… it’s about sending a message: Everything burns!

Alfred Pennyworth: “With respect Master Wayne, perhaps this is a man that *you* don’t fully understand, either. A long time ago, I was in Burma. My friends and I were working for the local government. They were trying to buy the loyalty of tribal leaders by bribing them with precious stones. But their caravans were being raided in a forest north of Rangoon by a bandit. So, we went looking for the stones. But in six months, we never met anybody who traded with him. One day, I saw a child playing with a ruby the size of a tangerine. The bandit had been throwing them away.”

Bruce Wayne: “So why steal them?“

Alfred Pennyworth: “Well, because he thought it was good sport, because some men aren’t looking for anything logical, like money. They can’t be bought, bullied, reasoned, or negotiated with. Some men just want to watch the world burn.”

While comparing the average Islamic extremist nut or abortion-clinic shooter to the criminal mastermind that is The Joker is likely giving the former way too much credit, the philosophy behind the comparison and the psychological framework of the crazed individuals in question hold firm. Viewing terrorist demands as bargaining pleas is the wrong way to frame the situation, because these people who kill others over a fucking cartoon or through some deranged, cultist inspiration are not logical, emotionally stable individuals like you or I or the average person walking the street. These people are not just weirdos who vehemently disagree with us on many political and social issues —- these are weirdos who are willing to threaten bodily harm and/or kill us solely for disagreeing with them on those political and social issues. That is not normal.

This is why appeasing religious and political fanatics with censorship does nothing to make us safer as a society and is nonsensical: Crazies who are willing to hurt other people over differences in opinion aren’t demanding or looking for anything logical, and thus logical, rationally-minded people have no hope of defeating them by giving in to their threats of violence and physical coercion. Censoring ourselves makes us less safe, not more. It won’t satisfy these men, it won’t make them go away, and it won’t give them what they want. Because what these men really want, the only thing they want, is to watch the world burn.