‘The Devil All the Time’ (2020): Different Media Require Different Storytellers

The instructor of the lone screenwriting class I took in my bachelor’s degree remarked several times upon the different storytelling styles of literature (e.g. novels, novellas, etc.) compared to filmmaking (e.g. feature-length movies, short films, commercials, animation, etc.). Literature is about the exploration of the internal, how characters think and feel and how they describe those thoughts and feelings to the reader; filmmaking, on the other hand, which is a visual medium having more stylistic overlap with graphic novels than traditional novels, is about characters’ actions, how they move, act, react, and reveal themselves through body language rather than dialogue. 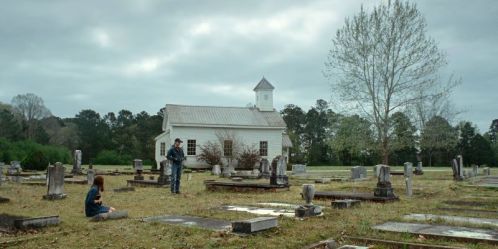 Elizabeth Scanlen (left) tends to the grave of her dear departed mother while her step brother, Holland (center), keeps her company.

This subtle yet striking observation was one of many subjects we discussed in that course, others of which included screenwriting basics (always describe your characters, scenery, and story with simple verbs and vocabulary), why superheroes are bland, empty protagonists (they always do the right thing), the limits of dialogue on screen, and that I’m a rather terrible screenwriter, myself. As a function of that first lesson, however, I came to better understand why successful filmic adaptations of literary media are so difficult to execute: Their opposite storytelling methodology.

Case in point is another Netflix Original Movie, Antonio Campos’ adaptation of the 2011 novel, The Devil All the Time (a great title, by the way), by Donald Ray Pollock, a sort of “hillbilly Gothic,” psychological thriller about various small-town evils and conservative religion in the American heartland. Campos’ translation of Pollock’s introspective ensemble piece with fellow screenwriter and brother, Paulo, embodies the unfortunate tonal clashes and structural inconsistencies common to most film adaptations of popular novels, including but not limited to an engorged running time (139 minutes, quite indulgent for a straightforward if morose drama), an inconsistent ensemble cast, a plethora of odd scenes and unnecessary subplots, and an obtuse voiceover (the original book’s author, Pollock) to paper over weak visual storytelling.

Most noticeable about The Devil All the Time (henceforth, The Devil) is its weird, unjustified narrative structure and its overextended first act in particular. Though Tom Holland is the face and supposed protagonist of this film, he doesn’t appear on-screen until about 45 minutes into the movie, and the setup prior to his entrance leaves much to be desired. The Devil attempts to coordinate its ensemble cast and nonlinear storyline into a sort of macabre diatribe on rural cultural decline in Appalachia, but its broad supporting cast, frequent cross-cutting between timelines, and disparate geographic locales (the narrative switches between southern Ohio and northern West Virginia) confuses the viewer and dilutes its narrative momentum. Various minor characters (e.g. Harry Melling, Douglas Hodge) enter and exit the story with little emotional impact other than a waste of screentime, while Pollock’s pervasive narration feels clunky and an obvious crutch for the movie’s haphazard scene transitions.

A further result of The Devil’s unconventional structure is how it feels more like a series of morbid vignettes, an anthology of quasi-“Sunday School parables” about how everyday sin and common authority figures corrupt communities rather than a traditional feature. As an anthology similar to the Coen Bros.’ Ballad of Buster Scruggs (2018) or Michael Dougherty’s Trick ‘r Treat (2007), The Devil might have worked, but as a singular feature, it’s a narrative mess. On the one hand, the childhood and coming-of-age of Holland’s lead command the bulk of the movie’s runtime, but on the other, so many characters, subplots, and the film’s entire first act have so little to do, at least directly, with Holland’s adult protagonist. The movie feels like an identity crisis between its literary source material and Campos’ directorial vision.

As far as cinematography and visual style are concerned, Campos’ directorial leadership isn’t bad; The Devil has little in the way of flashy oners or identifiable camera movements, but its blocking, framing, location-photography, and morbid color palette are all memorable. Director of photography (DOP) Lol Crawley’s compositions of a decaying community undone by a minority of powerful, amoral actors are well lit and memorable, transforming otherwise quaint, forgettable backdrops like a small-town gas station, a woody hill, a decrepit church, and others into emotional, distinct images.

Given the movie’s dour, uninspired narrative and Antonio and Paulo Campos’ haphazard translation of it to screen, though, The Devil All the Time would’ve needed transformative cinematography to make it worth recommending. The film, as it stands, is a good-looking but confused period-piece that won’t connect with most audiences who can’t relate to its Middle American cultural backdrop or analysis of conservative Christianity.

I’ll credit certain castmembers (e.g. Tom Holland, Robert Pattinson, Sebastian Stan) and cinematographer Lol Crawley for giving the movie considerable production value, but at the end of the day, The Devil All the Time is let down by weak translation of its literary source material. There just isn’t enough connective tissue to make the overall story work.

SUMMARY & RECOMMENDATION: Antonio Campos squanders a potentially powerful story with questionable editing, obtuse narration, and a bloated, unwieldy cast. The Devil All the Time is more a series of disconnected shorts than a cohesive feature, and you can feel the narrative compromises forced onto the screenplay as a result of its flawed adaptation process.

— However… The Devil All the Time remains a good-looking movie thanks to DOP Crawley’s work, though in hindsight he may have better served the project taking more risks. Quasi-lead Holland and antagonists Pattinson and Stan are major positives thanks to their complex characters.

—> NOT RECOMMENDED: In “normal” times before COVID-19 and the rise of streaming television, Campos’ weak yet gory drama would’ve been competitive at various film festivals and maybe even the Academy Awards. These are not normal times, and therefore The Devil All the Time has fewer opportunities for hack critics to overrate it.

I love movies, music, video games, and big, scary creatures.
View all posts by The Celtic Predator »
« Possible Franchise Expansions on Streaming Platforms
Brad Anderson’s ‘Session 9’ (2001), ‘The Machinist’ (2004), & ‘Fractured’ (2019): When Your Mind is Not Your Own »