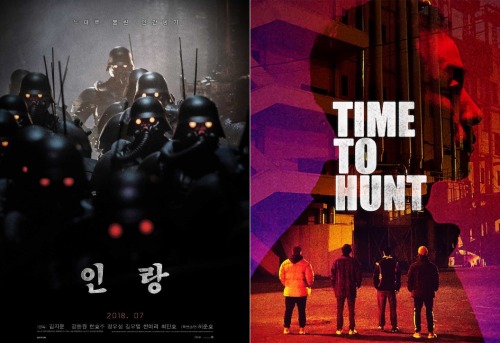 Korean cinema may have at last achieved mainstream international recognition with the rising popularity of Korean soap operas on streaming platforms and the recent success of Bong Joon-ho’s Parasite (2019) at the 2019 Academy Awards. Numerous self-righteous cinephiles, including myself, have long championed the country’s burgeoning soft power, the modern “Korean Wave” as it were, including its filmmaking. I suspect the future of East Asian popular culture will be dominated by the southern half of the Korean peninsula, with its already esteemed film industry growing in demand and diversity. 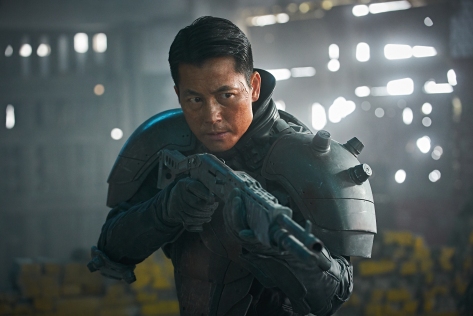 Jung Woo-sung costars as The Wolf Brigade’s de facto narrator and the audience’s main source of exposition thanks to the film’s complicated, borderline incoherent backstory and a flatline of a protagonist (Gang Dong-won).

As such, I thought it pertinent to review a couple smaller-scale, lower profile Korean features distributed by my streaming platform of choice, Netflix. The first picture to highlight is Illang: The Wolf Brigade, the latest genre extravaganza from venerable filmmaker Kim Jee-woon, director of such films as The Good, The Bad, The Weird (2008), I Saw the Devil (2010), and The Last Stand (2013, his Hollywood debut and Arnold Schwarzenegger’s return to acting). What differentiates The Wolf Brigade (henceforth, TWB) from the bulk of Kim’s acclaimed filmography is evident from a quick Google search, which reveals the film’s negative critical reception and embarrassing box office performance. A deeper dive into the film’s source material, a series of animated Japanese films and manga, reveals further insights regarding the screenplay’s complicated alternative historical fiction, which at times feels overtranslated from its hyperbolic Japanese origins and hamfisted in its final execution. TWB’s dystopian setting, a 2029 unified Korean nation suffering political unrest from both populist uprisings and anti-unification terrorist groups, feels only half-realized and, like the narrative backdrop of the second film to be analyzed in today’s essay, Time to Hunt, more superficial justification for the movie’s over-the-top action sequences and stylized violence.

With regards to that action filmmaking, however, Kim Jee-woon’s cinematographic command remains as powerful as ever. Director of photography Lee Mo-gae, who worked with Kim on The Good, The Bad, The Weird and A Tale of Two Sisters (2003), captures the movie’s diverse cinematic combat with flair, which includes everything from dynamic close-quarters-combat to deafening shootouts to stunning car chase sequences. Fans of I Saw the Devil’s catlike fight choreography and plentiful blood squibs will find much to like, here, and the story’s excellent pacing spaces these varied set-pieces to modulate the movie’s considerable 138-minute running time.

What undercuts Kim’s graphic novel-esque adaptation the most is not, in fact, the narrative’s complicated political backstory, but rather the lackluster characterization and performance of star Gang Dong-won, the titular “Wolf Brigade.” Gang’s lead is meant to evoke personal conflict over his role as a paramilitary commando tasked with keeping the peace in a violent future Korea by any means necessary. His mission, guided by the much better acted commanding officer of Jung Woo-sung, seesaws between guarding a sympathetic yet disingenuous female lead, Han Hyo-joo, and a complicated James Bond-type plot that involves rooting out and violently eliminating various terrorist infiltrators within the government. These tonal clashes limit the development of Gang’s underwritten protagonist and muddle the film’s complicated thematic introspection.

A much simpler film with a no less confusing diegetic backdrop is the sophomore feature of rising Korean writer-director, Yoon Sung-hyun: Time to Hunt. The film could be summarized as a dystopian Korean mix of The Terminator (1984) and No Country for Old Men (2007), with its poorly explained dystopian setting functioning as little more than rationale for a violent game of cat-and-mouse between a mafia hitman (a great Park Hae-soo) and a small-time stickup crew (principle castmembers Lee Je-hoon, Ahn Jae-hong, and Choi Woo-shik). If you like movies built around extended chase sequences, you can’t afford to miss Time to Hunt, even if its 134-minute run-time is inexcusable and the narrative takes 45 minutes to build to its central plot-device. The film’s dept nighttime cinematography and love of neon lights feels like John Wick (2014) told from the perspective of its prey, an underdog crime drama permeated by an unending sense of dread: Our heroes can run, but they can’t hide.

Much of what makes Time to Hunt worth watching are the realistic, relatable performances of our principle cast, how they respond to the gleeful, sociopathic antagonist (Park) stalking them; Park has more personality than Schwarzenegger’s T-800 and a dark sense of humor more nonchalant than Javier Bardem’s Anton Chigurh, which contrasts well with our protagonists’ desperate fight for survival. These characters’ realistic personalities and relatable chemistry throughout this heightened thrill ride make the film’s copout ending forgivable. 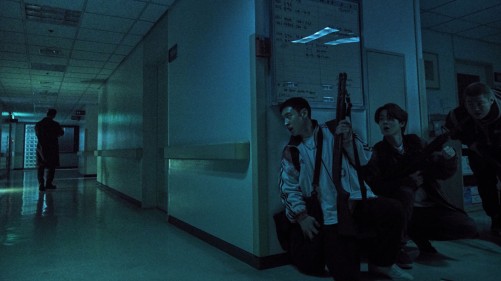 What’s remarkable about both The Wolf Brigade and Time to Hunt is how competent their stories and visual execution are despite their otherwise ridiculous dystopian settings. I struggle to decide whether the diegesis written by Kim Jee-woon or Yoon Sung-hyun are more laughable, yet their portrayal of narrative tension, immaculate lighting, and versatile action camerawork remain captivating despite their screenplays’ overwritten backstories. Their weaknesses are notable — an underwhelming protagonist in Brigade, a bloated running-time and throwaway ending in Hunt, and half-baked world-building details in both — so I’m torn on how much to recommend them to general audiences; and yet, their exemplary production values and cinematic violence are hard to forget, not to mention hallmarks of contemporary Korean cinema.

SUMMARY & RECOMMENDATION: The Wolf Brigade plays like the sort of ultraviolent graphic novel adaptation Hollywood would never made, yet whose action filmmaking also recalls the style of Western spy thrillers like Mission: Impossible (2011, 2014, 2017) or the Daniel Craig era Bond films (2006, 2008, 2012, 2015, 2020). Time to Hunt, on the other hand, is a direct descendant of the cat-and-mouse chase thrillers that are Terminator (1984, 1991) and No Country for Old Men (2007), and its thrills don’t pail by comparison.

— However… Gang Dong-won is stilted and underdeveloped as the star of Wolf Brigade, while Time to Hunt wastes too much time establishing a futuristic world that matters little to its main characters or story. Both films struggle with diegetic background details.

—> I enjoyed both films, but remain ON THE FENCE with recommending them to other viewers.