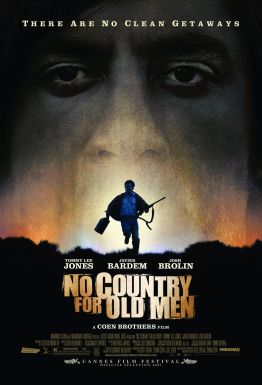 “Call it.” Those simple, chilling words from one of the scariest, most threatening, and predatory movie-villains ever summarize the Coen Brothers’ finest film better than any review ever could. No Country for Old Men is a hauntingly beautiful neo-western thriller that examines ideas of chance, pre-destination, and the prominent role of violence in human fate. Its somber themes of nihilism saturate the dark motel halls and terrifying Texas landscapes in which a complex cast of figures hunt and become hunted, engaging in one of the most enthralling games of cat-and-mouse ever put to film. If you see one Coen Brothers piece in your lifetime, make it this one. 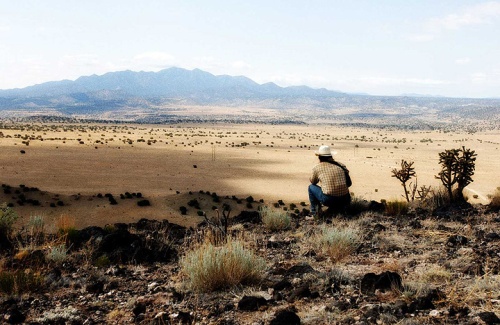 No Country forgoes the awkward comedy and over-the-top satire of violence of other Coen Bros. films before or since in favor of a darker, more serious depiction of brutality. In this movie, violence is neither comedic nor exploitative, but rather an artful analysis on fate and the roles that chance plays in our lives. No Country is a serious, dark, bloody film through and through.

It’s hard to decide whether to pigeonhole No Country as either a neo-western or a thriller, so most people say it’s a combination of both. From a genre-western standpoint, the film modernizes the ideas of lawlessness in a world in which the standard archetypes of heroes and villains are broken. Good people are no longer the masters of their fates, and the dark villains that stalk them are, for the most part, unstoppable forces of nature. As a thriller, No Country excels in capturing the suspense of the hunt and the terror of being hunted. Danger always lurks around the next corner, and that sense of unease ratchets the anticipation of violence to a point where it is almost suffocating. In other words, this Coen Bros. film is a lethal combination of two of the most visceral genres in filmmaking.

This film also features the Coen Bro’s best camerawork and use of mise-en-scene. The poetic symmetry of their shots and the careful blocking of every character in every scene accentuate the overarching moral themes of the narrative. The plainness with which the Coen Bro’s shoot their extreme violence is cold, calculating, and melds with the film’s almost total lack of musical score. At times, these writer-directors flaunt their fluency of thriller and western cinematography, with Roger Deakens comfortably shifting between extreme wide-angle shots of desolate Texan country to disturbing, extreme close-ups of Javier Bardem performing impromptu surgery on his gun wounds.

No Country boasts a terrific cast. Its most famous performance is Spanish actor Javier Bardem as a terrifying, psychopathic bounty hunter with an equally terrifying hairdo. Bardem’s Anton Chigurh is one of best villains of 21st century cinema thus far, due to his foreboding composure, great lines, and terrific character symbolism. His dark persona functions as a perfect antagonist in the film’s dog-eat-dog setting. The rest of the cast performs admirably, though they are overshadowed to a large degree by Bardem’s Academy Award-winning performance. Tommy Lee Jones is billed as the movie’s lead-actor, but in truth, the movie’s structure operates without a defined protagonist. In any case, Jones turns in a solid performance as the lawman who’s grown too old and seen to much to live peacefully in a land so violent, so ravaged by evil (hence the film’s title). Josh Brolin acts as the perfect everyman cast into the modern wild west by fate and circumstance; it is his trials and tribulations that garner the most suspense. Various other minor roles contribute to the success of No Country’s narrative, including an unexpected key performance by Kelly Macdonald as Brolin’s wife and Woody Harrelson as a rival bounty hunter.

Like any great western, No Country is punctuated by scenes of extreme violence. I wouldn’t describe these sequences as action scenes, as that term implies a pulpy, stylized tone. Rather, these key scenes with graphic or implied violence, most of which are perpetuated by Bardem’s Anton Chigurh, illustrate the narrative’s broader examination of modern brutality. Rarely will you see a darker and more poetic portrayal of motion picture-violence.

The Grim Reaper with a cold steel, silenced shotgun

In summary, No Country for Old Men is Joel and Ethan Coen’s definitive film. It is also decidedly unlike much of the rest of their filmography in that it lacks the humorous, absurdist overtones of their cult classics, such as Fargo (1996), The Big Lebowski (1998), and O Brother, Where Art Thou? (2000). Looking back on their whole career, it’s ironic what is far and away their best film is so different than their standard auteur label. Who in 2006 would have thought the Coen Brothers were capable of something like this? This just isn’t their style, and yet they master the dark, chilling thrills of a bloodthirsty Texas landscape so elegantly. There are many elements of the Coen Brothers signature style within No Country, namely their strong characterizations and distinctive wide-format, shot-reverse-shot dialogue, but in all fairness, this world is as far from Peter Stormare shoving Steve Buscemi into a wood-chipper as one can get.

SUMMARY & RECOMMENDATION: The Coen Bros. hit a home run with this effective, entertaining adaptation of Cormac McCarthy’s acclaimed novel. It is incredibly difficult to craft a compelling adapted screenplay from a literary source material, but the Coen Bros make it look easy. A strong cast brings life to the powerhouse story, led by one of the best villains of the new millennium in Javier Bardem’s ruthless Anton Chigurh. Finally, the Coen Bros execute their story into a beautiful and foreboding modern western, tinged with hyper-violent crime drama.

? About that hair-cut — have you not seen Bardem in his normal hairdo? He’s a handsome dude!