‘Inside Llewyn Davis’ (2013): Because Assholes Need Love, Too 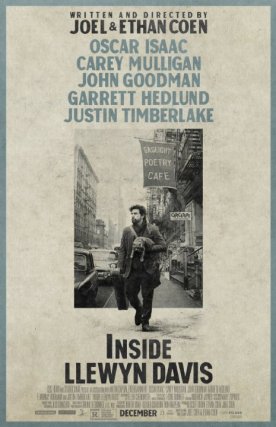 Much of what makes the Coen Brothers’ latest movie, Inside Llewyn Davis, so fascinating is how it examines the far more common and realistic scenario of an aspiring, wannabe dreamer who doesn’t make it big. Along with other complex themes and thought-provoking riddles, Inside Llewyn Davis (ILD) asks the intriguing question: When do ambitious but struggling artists (or athletes, or other kinds of entertainers) decide to cut their losses and abandon their careers? 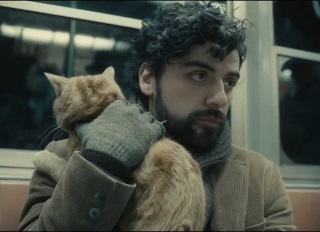 You’ll learn much about the nature of felines and uncontrollable emotions through the melancholic journey of Llewyn Davis.

True to Coen Bros’ fashion, ILD is interested in characters whose hopes stretch beyond their reality, those who would be considered by most people to be either assholes or losers or both. The film also continues the Coen Bros. trend of taking those otherwise unlikable, unrelatable, and decidedly un-special “losers” and giving them depth and humanity. The protagonist of ILD is the eponymous character played with sardonic wit by Oscar Isaac, a young, aspiring folk artist navigating the wannabe folk-rock scene of Greenwich Village of the 1960’s. Llewyn Davis is not readily likable by any stretch of the imagination. He’s rude, self-centered, and prone to juvenile outbursts. He frequently shoots himself in the foot when trying to make crucial network connections or decisions that might otherwise get his struggling music career off the ground. His success as an artist is limited by his questionable personality, self-destructive tendencies, and by the fact that it just ain’t easy to stand out in the music business even if you do have talent.

Davis definitely has talent, as evidenced by his beautiful performances of several classic folk songs remade and rerecorded exclusively for the film. He has potential should his immaturity and personal demons ever give his technical skill a break. The problem is, as described by the film’s thematic symbolism and bleak imagery, it takes many lucky breaks, immense talent, and desire to make it as a musician, and Davis, like most people, can’t seem to procure that magic combination.

The greatest strength of ILD is how the the Coen Bros take their initially unlikable protagonist and make him sympathetic. Through a series of well structured set-pieces, telling interpersonal conflicts, and a clever running motif involving felines, the Coen Bros. explore Davis’ character with amazing precision and reveal him to be a much more complex character than he seems. The narrative examines Davis’ psyche and the reasons behind his asshole behavior, showing his humanity in raw detail and allowing us to understand and even root for him. As the film goes on, we begin to empathize with Davis rather than dismiss him as yet another jerk. There are reasons for his rude, selfish behavior and an interesting inner turmoil that seems to weigh down his every step. Llewyn Davis is an asshole much of the time, yes, but he is also a human being like any other, whether personable or not. ILD’s ability to show (not tell) that is its most appealing attribute.

Things are tied together by a bleak cinematographic palette that manages to look both beautiful and depressing at the same time. The film’s visual style fits the central character and thematic content well, and the Coen Bros clever use of blocking enhances their thematic symbolism. Arguably the most creative camerawork deals with a feline plot-device in conjunction with Davis’ subtle yet distinct character arc. It’s a great combination of cinematographic timing, blocking, and framing to create engaging visual motifs.

Musicianship requires the right personality. Some have it. Davis doesn’t.

In short, Inside Llewyn Davis is probably the best Coen Bros. film since their 2007 magnum opus, No Country for Old Men. It’s about mid-level in terms of Coen Bros. absurdist humor, somewhere in between the giddy extremes of The Big Lebowski (1998) and O Brother Where Art Thou? (2000) and the utter darkness of their 2007 polar opposite. The film features plenty of dark, sardonic humor tucked within its sad exterior. Its unapologetic frankness about the reality of stardom aspiration and mature analysis of its protagonist are its main strengths, complimented by a slew of great musical performances that make it a complete package. The film manages to be pragmatic and honest without being utterly depressing, and that balance is something I think only the Coen Bros could have achieved.

SUMMARY & RECOMMENDATION: Inside Llewyn Davis is structured upon a versatile, complex screenplay, and is spearheaded by a breakout performance from Oscar Isaac. The story is a great character study of artistic aspiration as well as a thoughtful analysis of 1960’s American folk music. The Coen Bros’ imagery makes the best use of animal plot-devices I’ve seen in a long time. Finally, much like O Brother Where Art Thou? the music of Davis was not conceived as an afterthought, but rather an integral part of the movie from the start, and it shows.

? If it was never new, and it never gets old, then it’s a folk song.