Unhappily arranged marriages are a dime a dozen in the Indian film industry, and this classic example from 1965 in writer-editor-director Vijay Anand’s Guide sticks to the industry’s basics by mixing marital abuse, romantic intrigue, and religious symbolism into an almost seamless whole. While it’s hard to appreciate the film’s dated, somewhat complacent musical numbers compared to its flashier, more stylized modern counterparts, as a well composed story with solid characters, Guide is a recommendable classic from Bollywood’s golden years.

Much of Guide’s narrative is archetypal of Hindi cinema. A women (Waheeda Rehman) faces immense unhappiness and boredom in the face of her society’s conservative, caste-based marriage system, and eventually finds true love (Dev Anand) and fulfillment outside the socially acceptable bonds of traditional wife-hood. This premise is as old as South Asian cinema itself, but the way Vijay Anand directs it makes Guide a refreshing winner of a motion picture. The combination of well written lead characters and great lead performances (Rehman and Anand) is the film’s primary recipe for success.

In fact, Guide may have the best acting of any Bollywood movie I’ve seen yet. The performances by everybody, not just Rehman and Anand, are subtle and reserved, exuding emotional intensity, dramatic presence, and raw humanity not through wild overacting but realistic style and substance. In this way, Guide feels more like a classical Hollywood film than your typical Bollywood melodrama. The cast doesn’t just act like real people, they act like interesting real people with relatable problems and interesting personalities. Nowhere here will you find the cartoony excesses and annoying mannerisms of a typical Shah Ruhk Khan flick.

The most interesting characters are the male and female leads, played by Dev Anand and Waheeda Rehman. Anand plays an Average Joe, a nice guy who stumbles onto extraordinary circumstances. His compassionate nature becomes apparent through his interactions with costar Rehman, a depressed, downtrodden wife unhappily married to an aloof, disinterested, selfish husband. While Rehman is affluent in the materialistic sense, none of the economic security provided by her wealthy husband can replace the absence of romance and honesty that Anand’s character provides. Their chemistry is wonderful, each playing off the other in realistic, sensible ways. Their arcs are subtle yet substantial, in many ways reflecting the mirror opposite of each other’s development.

What’s so great about Guide’s presentation of this romance is that, at least until the final act, the story’s romance reflects a realistic relationship. Anand and Rehman don’t just struggle and then miraculously overcome every obstacle at once, they go through rough times and good times in a rhythm. Their love-life is a series of peaks, valleys, and plateaus. While the movie’s romantic premise may sound familiar, the rich details of it are anything but cliched. Guide features one of the most honest, relatable portrayals of romance I’ve seen in a long time. Anand and Rehman meet, get to know one another, fall in love, stagnate, grow apart, then grow back together, and so on and so forth. They grow and change like real people. It’s refreshingly honest in its portrayal of love.

A consequence of this grounded love-story arc is that much of the movie’s melodrama is, in fact, true “drama” in the traditional sense of word. Guide does not feel bombastic and over-the-top like so many other overracted Hindi movies, but instead feels relevant, relatable, and subsequently far more interesting. The film’s complexity makes its romance richer than if it had been written with everybody shouting, sobbing, and collapsing every five minutes. 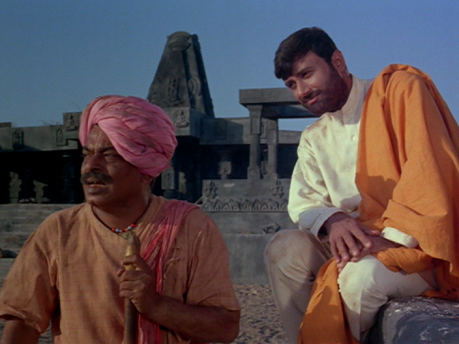 The lone area where Guide struggles (aside from its so-so musical numbers) is in its final act. The film attempts to bridge Anand’s redemption through heavy religious symbolism, and for the most part, this works. However, by the end, the saga of Anand’s endless fasting to entice the rain gods to spare a random poverty-stricken village becomes overindulgent. The length and seriousness of Anand’s spiritualism distracts from the story’s central romance and primary romantic themes, and thus become a burden on the story by the film’s conclusion.

Despite that non-insignificant weakness, Guide remains a fine film and one of Bollywood’s best romances. It rides high on the strength of its main characters and a bravado series of performances from the whole cast. All things considered, you could do far worse for Bollywood love-stories, and Anand’s and Rehman’s on-screen chemistry alone makes this movie worth seeing.

SUMMARY & RECOMMENDATION: Vijay Anand’s strong screenplay writes a passionate romance that trades the stylistic bells and whistles of most Hindi love-stories for a more relatable narrative that actually feels dramatic. Anand’s firm direction seals the deal, bringing this lush romance to life in a way that embraces gritty realism over fantastic melodrama.

— However… Guide does succumb to some typical Hindi melodrama by the end with its overindulgent religious symbolism.

? So… perhaps marrying for status and money isn’t always the wisest choice, then?