My experiences with independent (re: non-major Bollywood studio produced) Hindi-language movies, also known as “Hindi Indies,” are mixed at best; for every innovative, stylish Earth (1998) by Deepa Mehta, there’s an empty, forgettable Lunchbox (2013) over which Western critics fawn for no reason at all. As with other genres of film and different regional cinema, however, the rise of streaming services has aided the proliferation of smaller budgeted, niche projects from the Indian subcontinent. The current top dog of streaming platforms, Netflix, has distributed numerous high-profile Hindi-language series (e.g. Delhi Crime [2019], Sacred Games [2018-2019], Betaal [2020]), as well as the Telugu and Tamil-language feature, Game Over (2019), among others.

Our supporting cast, led by Avinash Tiwary (third from right), investigate a series of homicides in a nighttime shot that recalls Bram Stoker’s Dracula (1897).

One of the better low-budget Hindi features exclusive to the Netflix platform is the feminist period-drama and fable, Bulbbul, the directorial debut of longtime Bollywood screenwriter and lyricist, Anvita Dutt. At 94 minutes in length and lacking musical numbers, Bulbbul feels antithetical to the structure of most Hindi productions based in Mumbai, while its postmodern Gothic overtones recall the work of Western authors Mary Shelley, Charles Dickens, Edgar Allen Poe, and Bram Stoker over typical Bollywood films both classical and modern. Bulbbul’s premise of a 19th century Bengali noblewoman (a fantastic Tripti Dimri in the title role) transforming into a mythological Hindu demon-goddess to seek revenge against violent misogynists, on the other hand, feels decidedly South Asian, and writer-director Dutt’s use of fantastical colors and surrealist imagery, inventive and unique.

Contrary to what most South Asian critics and audiences may expect from stylized Indian genre films, I appreciate Bulbbul’s slim running time and tight, efficient pacing of its flashbacks against its primary storyline. The film’s lean structure and smooth rhythm are two of its greatest strengths, wasting no scenes or superfluous dialogue. The movie’s small, intimate cast is another function of this committed narrative structure and limited scope, which means viewers won’t suffer the terrible “comic relief” supporting characters or pointless side villains common to many lesser Bollywood blockbusters. Everything about Bulbbul is streamlined to its essential elements, and I recommend the film to other aspiring filmmakers — not to mention numerous industry veterans — as a benchmark for how to edit and pace a drama. There is zero fat, filler, or wasted material, here.

With regards to the movie’s visual style and direction, Dutt takes advantage of both her story’s local scenery and Western Gothic influences. Location-photography completed around Kolkata and Mumbai aides the film’s surrealist visuals and is accentuated by powerful lighting FX and post-production color processing. The movie’s characteristic blood-red hue, which signifies the supernatural transformation of our protagonist, is so striking and memorable it recalls the cinematography of Nicolas Winding Refn’s prettiest movies (e.g. Drive [2011], The Neon Demon [2016]). Combine these elements with a seductive yet playful soundtrack and clever editing (e.g. jump-dissolves, creepy scene-transitions, etc.), and you have an audiovisual storytelling personality worth experiencing.

If I had to muster nitpicks about the Bulbbul, I’d question the design of Dimri’s “monstrous transformation,” which is the same as she always looks save for her backwards feet, which look goofy instead of scary. Another questionable decision involves Rahul Bose’s dual roles as the primary antagonist and his identical twin, the latter of whom is mentally challenged and whose portrayal feels somewhat dated given the revisionist tone of this historical fiction. There’s also the matter of Dutt emphasizing the film’s Bengali setting while all its characters speak Hindi, which is akin to portraying colonial English settlers in North America speaking Cajun French. I’m not sure what the point of these artistic choices are, but they feel somewhat arbitrary in a bad way compared to the rest of the film’s detailed world.

All in all, Anvitta Dutt’s Bulbbul is the sort of underfunded, undermarketed niche picture whose specialized directorial vision limits its appeal to general audiences; it would have no place in today’s theatrical landscape outside of film festivals even prior to the COVID-19 outbreak. It’s too stylized and weird for most critics and too obscure or “political” to make a profit, so the streaming market is the only platform for this sort of film to reach its audience. I hope it performs well on whatever metric Netflix uses to measure internal ratings (its public viewership numbers are questionable at best), because the more independent Hindi-language productions that look and sound like this as opposed to crap like The Lunchbox, the better. Seriously, fuck that movie. 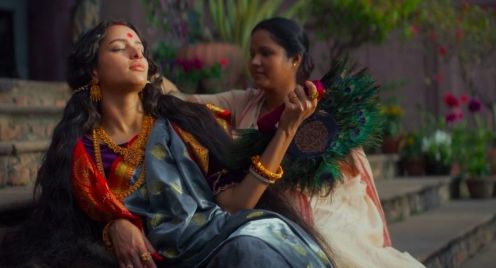 In the present day storyline, lead Tripti Dimri (left) relaxes with the confidence of a supernatural being.

SUMMARY & RECOMMENDATION: With a strong, cohesive directorial vision in both cinematography and screenplay, Bulbbul is a contemporary Indian fable that uses the former to enhance the strength and meaning of the latter. The cast is strong, but a lasting impression is left by the sheer range of lead Tripti Dimri.

— However… weird, almost nonsensical details like Dimri’s demonic transformation, the portrayal of a mentally challenged supporting character, and the film’s principle language of choice are distracting.

—> Bulbbul comes RECOMMENDED for those interested in South Asian filmmaking beyond the formulaic musicals of Bollywood or the pandering characterizations found in Awards-Bait.

? The villagers seem wise to the mystery behind Bulbbul’s fantastical powers, so why couldn’t male lead Avinash Tiwary catch on?