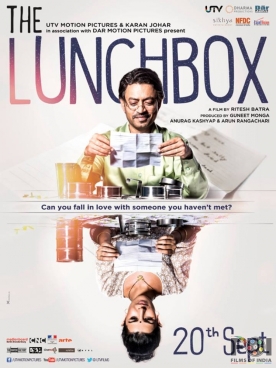 The Lunchbox is the sort of Indian film that typical film buffs or film festival lovers are most likely to see. It’s little different than your usual dysfunctional-family/quirky-misfit dramas churned out monthly in North American film circuits, akin to the filmmaking styles of Sam Mendes’ American Beauty (1999) or Deepa Mehta’s Elements Trilogy (1996, 1998, 2005, but not nearly as good). As such, anyone who’s familiar with mainstream South Asian popular culture will find little of interest or excitement here, and quite frankly, I don’t blame them. Irrfan Khan gives the 500th or so good performance of his career, and his supporting cast is commendable, but the screenplay and direction of the film around them are derivative at best. 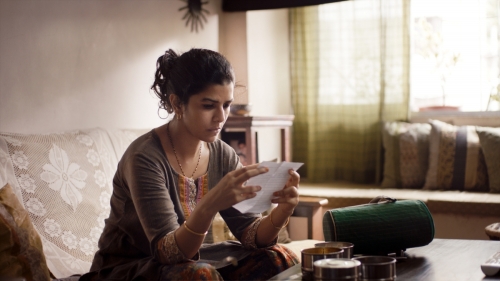 Kaur reads a message from Khan, where most of the development between them takes place through voiceovers. I’m riveted.

I went into this movie expecting a certain kind of easily watchable but ultimately forgettable narrative, and that’s exactly what I got. The Lunchbox, like those aforementioned Western critical darlings, is a film that’s tailor-made for artsy award circuits, for the self-proclaimed artistically minded film snobs to enjoy at their local independent theatre. The fact that this movie played at my local college-town art theatre but Haider (2014) did not both amuses and pisses me off to no end.

The Lunchbox follows the story of two emotionally wounded, lonely, lovesick souls who stumble across each other through sheer coincidence and communicate through handwritten letters. A mix-up occurs when one housewife, Ila (Nimrat Kaur), tries to send her husband daily homemade lunches through Bombay’s famous dabbawalas delivery system, but her package keeps getting sent to an office worker named Saajan Fernandes (Khan) by accident. Kaur is trying to rekindle a dissipating marriage by way of her man’s stomach, and Khan is a widower who ignores his coworkers and spends his nights alone, gazing longingly at his neighbors’ happy families through their windows. You see where this is going, yet?

To first-time feature-film writer-director Ritesh Batra’s credit, both Kaur and Khan have acceptable arcs and Khan’s friendship with his replacement (Nawazuddin Siddiqui) is cute, but again, everything here comes across as hopelessly pandering and formulaic. Nothing is inherently wrong with formula so long as the narrative formula under question is executed well or has something meaningful to say; the problem with films like The Lunchbox and its Western counterparts is that most of them are so hopelessly boring and ridden with cliches despite pretentiously claiming to be rebellious and cliche-free. The story of an Indian wife ignored and unappreciated by her husband is well-worn territory, as is the dysfunctional family and emotionally wounded old fart who finds support through newer, younger friends, as is the pen-pal/anonymous letter plot-device, and The Lunchbox adds nothing new to these formulas, nor does it execute this cookie-cutter plot in an interesting visual way.

It feels as long as a Bollywood blockbuster at times because it’s so freaking slow! Something like Dilwale Dulhania La Jayenge (1995) feels as long as it is because it’s over three hours in length, but it’s also fun and entertaining and reminds you that you’re still alive, watching a movie. Conversely, The Lunchbox is less than two hours but feels nearly twice its length because nothing dramatic happens during the entire movie. Listen to me and listen to me well, up-and-coming, independent filmmakers: You do not need giant explosions and constant CGI-violence in your movies to create cinematic excitement. There are other ways to make an effective, cinematic feature, including dramas.

In other words, if you love serviceable but overall boring films that don’t have anything meaningful to say (i.e. most independent dramas ever made, regardless of nationality), I’m sure you’ll gush over this and recommend it to all your book club friends. If, on the other hand, you’ve seen an indie critical darling or hundred, you can take a pass on this and not miss much. I am so tired of so many of these films being made year after year and having pseudo-highbrow film critics and movie-buffs buy into their pretentious hype; at least no one who goes to see Transformers: Age of Extinction (2014) is lying to themselves about what a great artistic experience it is —- at least they’re honest about the film they’re seeing and not living in denial. 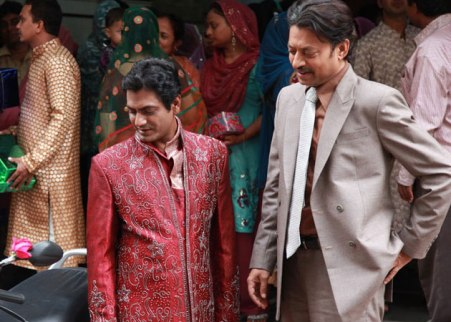 Easily the best part of the film is the budding relationship between Khan (right) and his new coworker, who’s meant to replace him (Siddiqui, left).

People swept up in the unearned artistic snobbery of films like American Beauty or Boyhood (2014) or The Lunchbox make me think of one thing in particular: Bullshit professional “wine-experts” or wine connoisseurs who pretend they know more about booze than the rest of us, and think there’s actually a significant difference in quality between, say, $750 Bordeaux wines and $35 New Jersey brands. As it turns out, wine-tasting is junk science and most of society’s definition of food quality has to do with brand labels, socially accepted snobbery, and pretentious bandwagoning. It’s time that fans of indie or “art”-films recognized this analogy and stopped kidding themselves. These movies are not that good, people, and they certainly aren’t inherently superior to what’s playing in mainstream, blockbuster cineplexes every weekend. At least those movies are exciting, and last time I checked, “excitement” was a good thing.

SUMMARY & RECOMMENDATION: Batra’s direction lacks any sense of energy or introspection whatsoever other than to establish that his two leads are lonely. The story crawls at a snail’s pace for most of its run-time.

— However… The Lunchbox develops its characters well, and ironically, the sideplot involving Khan’s friendship with Siddiqui is the best part of the film. The premise between Khan and Kaur is cute enough despite its contrived bittersweet ending.

? Excitement is not a dirty word in cinema, nor does “artistic” mean boring or dialogue-heavy. On the plus side, those lunch pales are adorable.