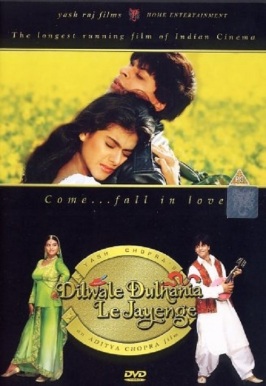 Bollywood’s most successful romance ever strikes a chord with the intricacies of falling in love, Hindi style, and revels in the melodrama of arranged vs. love marriages still common within the Indian diaspora today. Regardless of its subject matter, though, Diwale Dulhania Le Jayenge (henceforth, DDLJ) ultimately rises or falls on the strength of its male and female leads. Some audiences may find Shahrukh Khan’s (SRK) protagonist charming, while others may simply find him annoying; I found him to be a little of both. Kajol’s female lead performance is the more consistent of the two, but is also somewhat stereotypical. The chemistry of these two actors, arguably the most famous romantic duo in all of 1990s and 2000s Bollywood, is what carries the film and helps the story overcome its glaring weaknesses.

You have to approach a film like DDLJ expecting a fair amount of cheesy, over-the-top, exaggerated acting that wouldn’t be out of place in most Western soap operas. Personally, I have little patience for styles of overacting descended from theatre or improv, where an overemphasis on extreme gestures, tears, and yelling was (and to some extent, still is) the norm. It sticks out like a sore thumb to most Western audiences in a feature-film format, even relative to Western blockbuster-filmmaking, because 95% of the human population doesn’t act like that in real life. 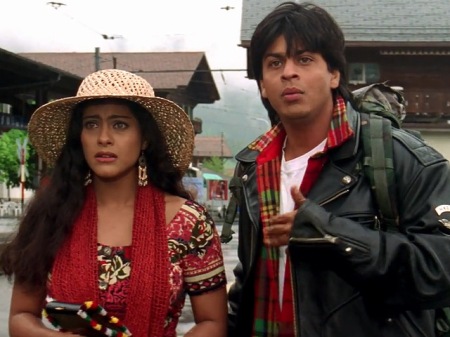 In keeping with Indian movie-romance tradition, our female lead, Bollywood superstar Kajol, isn’t too thrilled with her male lead suitor, fellow superstar SRK, for the first half of the story.

In certain film industries, soap opera-style acting is more common, because for whatever reasons those audiences are conditioned to it and accept it as common practice. Having not grown up watching Hindi movies, or Indian films of any language for that matter, my introduction to this South Asian style of theatrical characterizations and romantic epics is somewhat recent. That being said, I’ve seen enough Indian blockbusters that everyone keeps recommending to me (DDLJ being one of them) to sense a trend or two.

The biggest trend I’ve noticed is how Indian actors in general, and Bollywood stars in particular, tend to perform much like soap opera-actors in the United States. Their expressions are more distinct, their body language more exaggerated, and they laugh, chuckle, cry, and shout like they’re just the happiest (or saddest, or angriest, or most emotional) people in the world. The flip-side of this (or maybe it’s the original cause — it’s hard to tell whether the chicken or the egg came first) is that Bollywood stories, conflicts, and character arcs are hyper-charged with emotion. This overflow of melodrama can be seen in every aspect of most major Hindi productions: The costumes are colorful and flashy, the direction and camerawork are fast and flowing, and the stories are rife with social conflict and dramatic tension. The musical set-pieces themselves, trademarks of Bollywood cinema, are manifestations and personifications of this free-flowing explosion of emotions.

With that in mind, we can discuss DDLJ. Contrary to how much I just mini-ranted, I enjoyed the film. Visually speaking, the movie is gorgeous, especially in its second act. Some of its most memorable sequences include the meadow-scene showcased on the film’s DVD-cover, where Khan and Kajol first embrace, as well as a playful montage where the two backpack (and sing!) across Europe. Numerous dance ensembles leading up to the main wedding are diverse, colorful, and melodic, and further sport excellent dance-choreography. Kajol and Khan work well together, despite their irritating quirks, and it’s fun to watch their relationship develop from mild physical attraction to head-over-heels in love. Though the cast’s performances as a whole can be, at times, irritating due to their overacting, Khan’s charisma and the script’s pacing go a long way toward building an effective romance.

The fact that a good hour of the first act is just Khan and Kajol getting to know each other, and that the film is able to hold your attention during that time, is impressive. Their characters’ charm, despite (or perhaps even because of) their larger-than-life emotions and exaggerated expressions, keep this massive, awkward, over-the-top soap opera oddly worth watching. It’s a strange situation, especially given my distaste for another famous Khan-Kajol flick, Kuch Kuch Hota Hai (1998), which outwardly looks, sounds, and feels very similar to this movie. Somehow, DDLJ manages to nail the trickiest of balancing acts between tedious cheese and memorable drama. In other words, DDLJ is good both because and in spite of its over-the-top nature.

As far as the actual story goes, it’s standard fare for a romantic musical. The bulk of the first act concerns Khan and Kajol’s dual leads meeting and slowly formulating romantic feelings for one another, as I said. Act One ends with Kajol departing England to fulfill an arranged marriage in her parents’ home in India, and Khan and his Dad (Anupam Kher) concoct a hackneyed, ludicrous plot to win her back. The juiciest melodrama doesn’t occur until the second half when the wedding celebration is under way. Khan’s strategy to win the girl of his dreams becomes more far-fetched with every scene, but the plethora of visual humor and ease with which Khan swindles the buffoons of his rival romantic party are entertaining in their own right. At least Aditya Chopra allows for the final scenes, where Khan’s master-plan finally becomes revealed, to be milked for every ounce of melodrama they are worth. It’s not as if Khan just waltzes into the wedding, crashes it in a few hours, and then leaves. 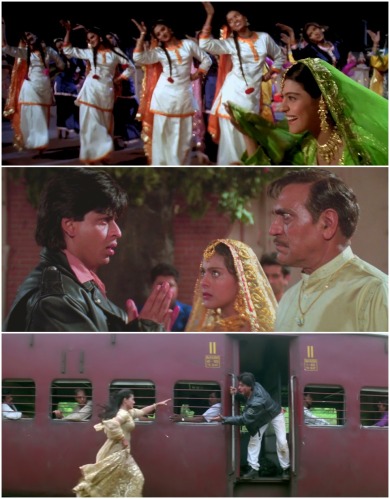 Top: One of the more notable songs of DDLJ, near the end of its second act: “Mehandi Laga Ke Rakhna.” Middle: Amrish Puri (right) utilizes his trademark glare-of-death frequently in DDLJ… much like he did in Indiana Jones and the Temple of Doom (1984)! Bottom: The famous “running to catch the train” scene at the end of the movie.

That being said, one bit of melodrama that could’ve gone is the movie’s penultimate scene. The sequence right before the famous “running to catch the train”-climax involves Khan being confronted by his rival, who has discovered Khan’s ruse to foil the arranged marriage. Before our hero can bail, his nemesis and his gang of cronies initiate an excessively violent, gruesome fight-scene that feels completely out of place in this otherwise tame love story. It’s like watching the live-action adaptation of Cinderella (2015), if right before the prince brings the glass slipper to his secret love, a sudden, Game of Thrones (2011-2019)-style Red Wedding were to occur. The whole scene is completely unnecessary.

I understand that a big charm, if not a defining trait of many Bollywood movies, is how they blend different genres or narrative tones in order to appeal to a wide range of audiences, much in the same way Hollywood blockbusters are designed for mass audience appeal. Yet, as I said in my Sholay (1975) review, haphazardly shoving in various genre conventions that usually don’t mix well can make for a big, bloody mess. Unless you’re someone like Quentin Tarantino, an expert at juggling multiple genre tropes in a single film, someone who’s great at nailing a unique tone, you probably shouldn’t combine elements like family-friendly romance, soap opera melodrama, and extreme, hardcore gang-violence in the same movie. The movie can become a big fucking disaster if you don’t know what you’re doing. Most films need to pick a tone and stick to it. Thankfully, DDLJ only makes this mistake once, but it’s a big enough WTF-moment to mention, and another recurring cliche of Bollywood blockbusters that I find tiresome.

I guess that’s it, really — I wish DDLJ had focused on a more original story, toned down the acting, and tossed the bizarre violence at the end. Otherwise, DDLJ is a striking and memorable, if flawed romantic epic. It is quite impressive how fun the film is to watch despite so being flawed. This massive soap opera has much going for it, namely a pair of capable leads who are more charming and memorable than they are fake or cartoony, a competent musical score, great dance-numbers, and a satisfying, iconic ending. While I’ll admit most Westerners might prefer to start on a more subdued, “beginner-film” for their introduction to South Asian cinema, Dilwale Dulhania Le Jayenge is as iconic as they come south of the Himalayas.

SUMMARY & RECOMMENDATION: Visually a treat to watch and soothing on the ears, Dilwale Dulhania Le Jayenge is a classic 1990s Bollywood romance that keeps on romancing till the the romancing’s done. No wait, that doesn’t make any sense… DDLJ is the most Bollywood-ish Bollywood movie that ever Bollywooded? Regardless, the colors are vibrant and the lighting is absolutely beautiful in every shot. Khan, despite his overacting, is a charmer, while Kajol’s hardened, stubborn character turned head-over-heels lover, is an interesting dynamic.

— However… some of the acting-cheese can be overbearing at times. You can predict the story five minutes into the film. The weird, bizarre spike in brutal violence at the end of the movie is weird and bizarre.

? What if instead of glaring at Khan with that trademark look-of-death of his, Amrish Puri just said, “Kali Maaaaaaa!” and ripped Khan’s heart out?