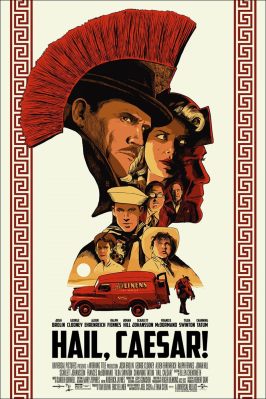 The Coen Bros. are some of America’s most endearing and creative film auteurs of the past thirty years. They blend and subvert genre expectations with carefree glee and almost irreverent abandon, intermixing tragedy, comedy, and even serial killer violence in ways that would make your average Bollywood romance blush. Then again, the Coens don’t simply “throw everything but the kitchen sink” into their screenplays and then have at it during principle photography, but rather they challenge basic filmmaking conventions in consistently successful ways that make them the objects of affection for film academics, film critics, and casual film fans.

Enter Hail, Caesar! (HC), which may be the most stereotypical, definitively “Cohen Bros. -movie” ever made. This movie is by far the CB’s most accessible and lighthearted venture, a welcome respite from the well made but ever so depressing and sobering Inside Llewyn Davis (2013). Like their most famous films, HC is rife with political commentary, Hollywood satire, and a strong ensemble cast; it’s bursting with color and wacky visual humor, as well as the CB’s trademark intimate approach to shot/reverse-shot dialogue. A welcome strength with HC and the CB’s filmography in general is their cinematic exposition and memorable characters. Even if their stories are sometimes off-the-wall or even uninteresting, their characters are appealing if not fascinating, and every scene filled with people sitting down and talking still feels cinematic; their movies still feel like actual movies rather than stage plays or stuffy novels. This sums up HC to a “T.” 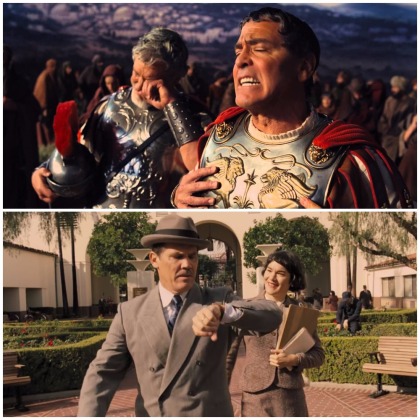 Top: Hollywood creates some amazing works of art from time to time, as awkward and bizarre as the business often is. Bottom: Brolin takes to the streets as part of his job as a big studio “fixer,” cleaning up the worst of the industry’s fiascoes.

A particular strength of HC is its star-studded and diverse cast, led by a Josh Brolin in one of his most endearing and fun roles. Scarlett Johansson, Ralph Fienes, Channing Tatum, George Clooney, and Tilda Swinton are all good, and some of those good performances are clearly the result of the CB’s amazing acting-direction, rather than the actors’ talent (*cough!* Tatum!). Brolin, however, is the standout man of this movie, as he showcases an impressive range of emotional vulnerability, thoughtful leadership, as well as gruff masculinity. He’ll remind you of your Dad in the best way possible, if that makes any sense.

Two other strengths of the film are its musical numbers and soundtrack, a staple of the Coens, and the story’s short, concise, well edited running time. Both the synchronized swimming set-piece featuring Johansson’s character and Tatum’s tap-dance routine are beautiful and charming, and Hail, Caesar! wraps at a tight 106 minutes. A strong musical component and restrained running time are a rarity in Hollywood nowadays, as I always say, so exceptions to those modern rules are particularly refreshing. Music can be a great strength of filmmaking; it doesn’t always have to be regulated to background noise. By that same logic, not all (or even most) movies have to be 2.5-3 hours long!

Hail, Caesar! is refreshing and warmhearted like Deadpool (2016) was brash and irreverent. It’s the Coen Bros.’ most mass audience-friendly picture yet, but not in the least bit watered down or artistically compromised. Brolin further demonstrates his capability as a lead man in addition to his impressive resume as a character or supporting actor. Hail Caesar! uses his charm in conjunction with a diverse ensemble cast and the Coen Bros.’ reliable direction to create a successful modern riff on classical Hollywood. This movie is not exactly groundbreaking, especially for the Coen Bros., but given its auteur direction, it doesn’t have to be.

SUMMARY & RECOMMENDATION: Hail, Caesar! finds the Coens at their most upbeat and charming, and the film maintains that sense of optimistic charm through colorful musical set-pieces, a fine lead actor in Josh Brolin, and snappy, cinematic dialogue. Few audiences and demographics will find anything in Hail, Caesar offensive, confusing, or boring.

— However… there’s little here we haven’t seen before, particularly from the Coen Bros. Some of Alden Ehreneich’s mannerisms grow tiresome.

—> RECOMMENDED. It’s not pushing any boundaries and won’t be remembered as the Coen Bros.’ finest hour, but given the sheer depth and range of their filmography, not to mention their innate talent with dry visual comedy and heartfelt characterizations, you could do much worse for nostalgic retrospectives about Hollywood’s Golden Age.

I love movies, music, video games, and big, scary creatures.
View all posts by The Celtic Predator »
« ‘Deadpool’ (2016): Taking the Swagger out of Superhero Movies
‘The Witch’ (2015): A New England Folktale »