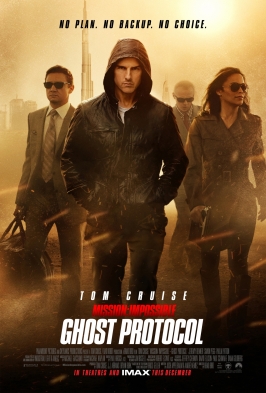 While today I like to think of myself as one of the biggest advocates of the Mission: Impossible (henceforth, MI, 1996, 2000, 2006, 2011, 2015, 2018) series, I wasn’t always a fan. Having watched the franchise in chronological order, the first three being on home video, I found the original a fun but generic spy-thriller with occasional Brian De Palma flourishes, the second perhaps the single worst film of John Woo‘s career, and the third a promising but shaky directorial debut by J. J. Abrams. Yes, that Abrams.

Jeremy Renner (top) grabs Tom Cruise (bottom) before the latter plunges to his death in Dubai.

I wasn’t too excited by the franchise’s soft-reboot in 2011, needless to say, however positive critical reviews were of Brad Bird’s (The Iron Giant [1999] The Incredibles [2004]) live-action debut. I couldn’t have been happier to have my sheer lack of faith thrown in my face.

Ghost Protocol is such a well balanced, well paced, and creative action film that it makes me hurt. To say it saved the MI franchise, transforming the series from irrelevance to one of, if not the greatest mainstream action franchise in Hollywood, as well as star Tom Cruise’s career, is stating the obvious. Ghost Protocol (henceforth, GP) embraces the practical FX and impressive stunts previous MI movies flaunted and have since come to define the franchise, but wraps them within a far more effective script that better stages those powerful set-pieces and develops minor characters. GP feels “complete” given this balance between archetypal characterizations and insane action sequences that refuse to violate relatable, real-world physics.

With regards to the movie’s balancing of Cruise’s lead, Ethan Hunt, its memorable supporting cast, and a complex, story-driven screenplay, GP’s secret sauce is its aforementioned pacing and the lead-up to each set-piece. Every action sequence from its prison-break prologue to the Burj Khalifa centerpiece to the near slapstick automated car park finale is preceded by considerable exposition, tense thriller sequences, and well timed music. Prior to these extended preparatory montages and exposition are extended character scenes, usually centered on Cruise or supporting actors Jeremy Renner, Simon Pegg, and Paula Patton. These developmental sequences are light on details but dramatic, with the actors’ impressive blocking and Bird’s fluid camerawork emphasizing character motivations and emotion as they relate to the complicated plot.

The most impressive cinematographic element of GP is perhaps Bird’s “cartoon sensibilities,” which is another way of saying he uses excellent framing. Whether he’s orchestrating a tense comedy shot where Pegg and Cruise use a projector screen to infiltrate a Kremline bunker or dizzying IMAX cameras to capture Cruise scaling the Burj Khalifa, Bird’s camera utilizes empty space combined with subtle but important visual details (e.g. Pegg’s goofy facial expressions, Cruise’s color-coded gloves) to emphasize actor movement and narrative tension despite minimal movement of the camera itself. Contrast this style with John Woo’s on-the-nose slow-motion in MI 2, Abrams’ frantic handheld cinematography in MI III, as well as Christopher McQuarrie’s diverse tracking shots in the latest two films, and you appreciate Bird’s ability to generate so much action with so little visual embellishment. Combine this cinematographic minimalism and framing with the film’s commitment to relatable physics and infallible heroes (i.e. action stars who do not appear invincible) and Ghost Protocol becomes the first MI film to live up to the “impossible” part of its series’ title.

To be sure, neither Ghost Protocol nor its sequel, Rogue Nation (2015, and presumably the latest followup, Fallout [2018]), are hardcore, innovative action features built for genre enthusiasts a la The Raid (2011, 2014) or Fury Road (2015). How these films are so dedicated to action filmmaking fundamentals, including and especially their freakish practical stunts, within a mainstream blockbuster framework is arguably their greatest achievement. Would Ghost Protocol and its sequels benefit from a few blood squibs here and there, plus maybe a “brutal” death per film? Probably. Do they manage to thrive despite their mainstream audience restrictions and expectations? Hell yes, and they do so with far more cinematographic finesse and screenwriting precision than an action movie parody like The Fast and the Furious (2000-).

I’ve said it before and I’ll say it again: It baffles me as to how any sane person could choose to watch the latter franchise over the former. In this cinephile’s assessment, Mission: Impossible Ghost Protocol is damned near the best of both hardcore and mainstream action filmmaking worlds, which is why the series remains so successful.

SUMMARY & RECOMMENDATION: The Mission: Impossible series was a mediocre throwback franchise before Brad Bird kicked it in the balls, forcing the series to adapt to a modern blockbuster environment dominated by the likes of the Marvel Cinematic Universe (2008-2019), where action films must boast near flawless scripts and powerful, stunt-based action sequences in order to survive. Ghost Protocol earned the brand’s still thriving reputation via painstaking narrative structure, a competent, memorable supporting cast, and dedicated visual minimalism.

I love movies, music, video games, and big, scary creatures.
View all posts by The Celtic Predator »
« What Have We Learned? A Psychoanalytic Blog-Retrospective
‘Pitch Black’ (2000): The Definition of an Antihero »