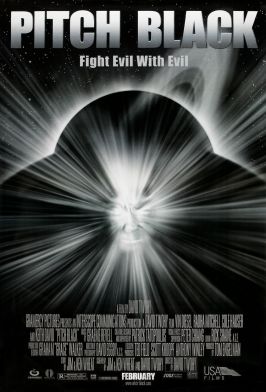 One of my favorite characters in modern cinema is Vin Diesel’s creepy, brooding ex-convict, Richard B. Riddick, from the semi-eponymous science-fiction franchise (Pitch Black [2000], The Chronicles of Riddick [2004], and Riddick [2013]). This may surprise readers given my irritation with The Fast and the Furious (2001-present), which made Diesel a star and remains his most identifiable role. However, Diesel’s first and best lead role in a wide-release picture established the actor’s now famous baritone voice and imposing physique, and is by far the best film in which he’s starred to date.

“I never made it to France…” Mortally wounded, Lewis Fitz-Gerald takes a final glimpse at his attackers.

A further explanation for Pitch Black’s quality is the time of its release; released in 2000 and in production well before that, Pitch Black possesses all the hallmarks of a small-to-modestly budgeted genre picture whose filmmakers have to use creative cinematography and limited special FX to execute their project (see also, Pandorum [2009], Looper [2012], Cube [1997], Tremors [1990, 1996, 2001, 2004], Equilibrium [2002]). Computer generated imagery (CGI) was still a relatively new tool at the turn of the millennium, especially for a $23 million production, so Twohy et al. worked around these limitations through clever editing, ingenious thematic lighting, and great set-design.

Much of this smart, budget-conscious sci-fi filmmaking is attributable to the film’s screenplay, which teases Diesel’s foreboding lead character with an unsettling voiceover during the film’s prologue and suspenseful misdirections throughout the first act. Diesel himself doesn’t speak on-screen until almost the half-hour mark, when he and the rest of his supporting cast finally matriculate and achieve memorable chemistry. Best among these supporting actors are Raddha Mitchell as the film’s sympathetic protagonist and female lead, Cole Hauser as a morally ambiguous mercenary and Diesel’s chief handler/anatagonist, character-actor extraordinaire Keith David as a traveling Imam, and child actor Rhiana Griffith as the narrative’s veritable “moral center.” All these characters have surprising depth to them, whose layers of motivation are slowly revealed as the story takes a turn into darker territory and their survival situation deteriorates. These actors commit to these frayed, increasingly desperate characters who, by the end of the film, develop well beyond their initial archetypes. Both Diesel and Mitchell in particular boast impressive arcs, and no one in their right mind could criticize this film from a screenwriting or character standpoint.

But again, both these character explorations and the aforementioned FX-limited cinematography are a function of the movie’s ingenious setting. Pitch Black’s diegesis, which envisions a futuristic yet plausible Alien (1979)-esque space-faring universe where our principal characters crash-land on a desolate planet, employs one of the greatest gimmicks I have seen in modern science-fiction filmmaking; not long after their marooning and Riddick’s subsequent escape, the cast discovers from the remains of an abandoned outpost that the planet experiences perpetual daylight from a triple-sun solar system. Unbeknownst to our characters until the second act, however, a network of nocturnal subterranean predators hide from the unending sunlight beneath them… until the unlikeliest of all solar eclipses occurs. As Diesel morbidly states to his supporting castmembers at the beginning of the film’s third and best act, “Like I said, it ain’t me you gotta worry about.”

These extreme lighting setups help the editors and cinematographers blend various practical and digital FX together, from composite blue-screen backgrounds to the computer generated aliens to Riddick’s seductive night-vision. I cannot overstate how effective the first half of the film’s high-key and the second half’s low-key lighting sell the entire film, from the desolate Outback location-photography to the monsters to the individual sets, much like how Steven Spielberg used Dean Cundey’s and Janusz Kaminski’s effective lighting techniques to enhance Jurassic Park (1993) and The Lost World (1997), respectively. Pitch Black’s premise is a wonderful example of how screenwriting, cinematography, and special FX build upon each other to the benefit of their overall film.

The movie’s few missteps involve a couple overzealous digital FX sequences that lighting setups couldn’t save, as well as some screenwriting issues that could’ve been solved with another draft rewrite. There’s a semi-interesting “gender reveal” about 3/4 through the film that doesn’t make too much sense or serve much purpose in retrospect, not to mention the formulaic dismissal of several red shirt characters in the first act is disappointing. Beyond that, however, Pitch Black is a remarkably consistent genre film from start to finish.

The Chronicles of Riddick series never garnered much respect after the critical and financial walloping the second film received (both of which were deserved), but I never lowered my previous evaluation of Pitch Black as a result, nor should I have. What we have here is the classical Hollywood success and fall from grace story that repeats itself ad infinitum. Pitch Black should technically be considered an independent feature given how it was the final production of PolyGram Filmed Entertainment before it merged with Universal Pictures, which then took control of the series’ rights. This stark difference in production oversight may explain the sheer contrast in quality between the charming Pitch Black and its bloated 2004 Hollywood sequel, but doesn’t take away from the original’s cinematic merit. I maintain this is one of the most overlooked of 2000s sci-fi cinema, and however tiresome Vin Diesel’s filmography would become after it, Pitch Black is a film of which all its cast should be proud to have been a part.

— However… being the early 2000s, a few cringe-worthy digital FX remain despite the editors’ best efforts, while a few supporting roles should’ve been jettisoned altogether.

? Sorry, Screen Junkies, Pitch Black is better than anything Roland Emmerich has ever done.