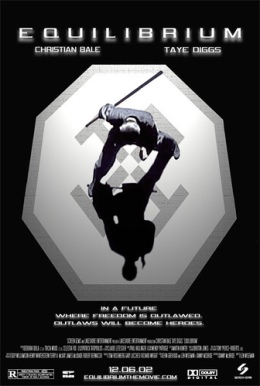 Critics can stand a great deal of heavy-handed, hamfisted social commentary in Oscar-bait or independent dramas (e.g. Dope [2015], Diary of a Teenage Girl [2015], Boyhood [2014], Crash [2006], Selma [2014], The Blind Side [2009]), yet throw some social awareness the way of an action or science-fiction film, and you’d better hope those filmmakers nail it. For every District 9 (2009) that manages to execute its political thesis perfectly, there’s an Elysium (2013) or Pandorum (2009) that hack film analysts will trash for even stepping out of line, it seems.

Case in point, 2002’s Equilibrium, an auteur action project by writer-director, Kurt Wimmer, which borrows heavily from George Orwell’s dystopian 1984-novel and served as an early indicator of the action-star capabilities of a then young, up-and-coming Christian Bale. The film is a seemingly forgotten picture in the new millennium action canon and little more than a footnote in its star’s now expansive career, but its low-profile and lackluster reviews betray an uncommon intelligence, high production values, and tenacious action scenes. Though Wimmer has since worked primarily as a screenwriter for hire for various 1980s cash-grab remakes (e.g. Total Recall [2012], Point Break [2015]), his work here suggests a lost action-filmmaker talent.

Equilibrium’s futuristic diegesis theorizes a world where emotions are banished and the feeling of such things are chemically neutralized by government-distributed drugs, called Prozium; any and all legal enforcement of such drug administration and punishment for rebel “sense-offenders” are overseen by the Tetragrammaton Council, whose law enforcement agents, the Grammaton Clerics (of which Bale’s character is a senior member) dispatch said rebels with ruthless determination. As the Clerics investigate a growing resistance to the Tetragrammaton’s autocratic rule, Bale becomes tempted by the allures of emotion and rebellion when he accidentally misses a dosage of his Prozium.

Much of the film’s premise is far-fetched, if not fantastical, to say the least, but the methodical way in which the Grammaton operates and Wimmer’s portrayal of the Orwellian society around them is respectful towards the film’s literary inspirations. Various miniatures, green screen shots, and fantastic location photography from Berlin contribute to a believable dystopian environment, adding to the narrative’s thematic presence. Wimmer makes plentiful use of historical fascist architecture, from Olympic stadiums to subway stations to a myriad of government office buildings constructed under Nazi rule. This commitment to environmental detail and setting helps the film feel less like an over-the-top science-fiction tale and more of an alternate future parable, a tone that enhances the seriousness of its world.

Much of the film’s story would fall on deaf ears, however, were it not for the class-act that is Christian Bale’s lead performance. The man truly sells his protagonist’s dilemma and arc, from stone-faced dictatorial enforcer to passionate rebellion leader. His emotional turmoil and conflict feel real, giving much weight to the political intrigue and guerrilla violence occurring all around him. Not only are his relationships with supporting castmembers fleshed out in detail, but he is further granted a backstory that lends depth to his violent actions later in the narrative. Bale is one of the biggest selling points of the entire movie.

One of the other major selling points is Equilibrium’s action. My personal favorite set-piece is Bale’s character-introduction, which showcases a gunfight taking place in near total darkness, but every sequence is well done and features a variety of weapons, techniques, and locations that pay homage to The Matrix (2000) rather than rip it off entirely. In a way, Equilibrium could be considered the proper Matrix-sequel we never got, given how both its story and action are a clear step above Reloaded and Revolutions (both 2003). 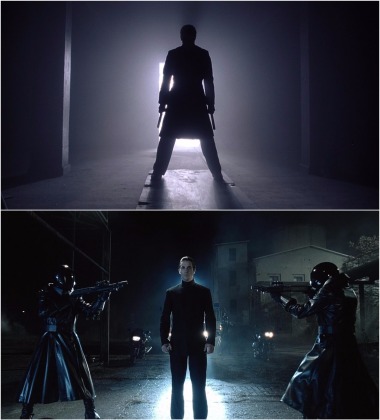 The only negatives worth noting are the film’s rather forgettable supporting cast and a few confusing, or unclear plot points. The former are not necessarily bad, but everyone from Taye Diggs to Emily Watson to Sean Bean are burdened with somewhat one-dimensional characters. Their primary purpose is to provide either motivation or opposition for Bale’s character, and in that sense they work just fine, but with a rewrite or two they could’ve been much more. The latter problem concerns a few shady government maneuvers and guerrilla operations that aren’t well explained to the viewer. You have to give the film the benefit of the doubt and go with the flow toward the final act, when the plot feels like it’s working overtime to wrap up all loose ends. It’s also unclear how much Prozium is being consumed at the higher levels of the Tetragrammaton government, and the matter is never fully clarified by the story’s conclusion.

All things considered, though, Equilibrium is a classy, violent action film that doesn’t forgo character development or thematic weight in favor of mindless action. This movie most definitely has a brain and ambition, though it’s unfortunate it doesn’t happen to get much credit for either. Equilibrium is more thought-provoking and thematically interesting than your usual Oscar-bait, and its further two or three times that worth in entertainment value. It’s worth your time if you’re either an action-fan or a Christian Bale-fan, and if you’re both, I can’t recommend it enough!

SUMMARY & RECOMMENDATION: It’s not quite as smart as it wants to be, but it’s far smarter than most would assume, and it’s got amazing action and a stellar lead to boot. Though he’s rarely in a state of vulnerability, combat-wise, Bale’s emotional struggle and development feel powerful and heartfelt. He brings a level of class to this role that most B-level actors couldn’t muster and most A-list Oscar-nominees-to-be wouldn’t bother. Writer-director Kurt Wimmer encapsulates his action star and set-pieces within a memorable dystopian setting, smart location-cinematography, and effective set design.

— However… Bale’s supporting cast pales in comparison, and the film’s acceleration in pacing in its final third muddles its narrative development.

? But I being poor have only my dreams/Tread softly, because you tread on my dreams…

I love movies, music, video games, and big, scary creatures.
View all posts by The Celtic Predator »
« ‘The Conjuring’ (2013): The Most Overrated Horror Phenomenon of the 2010s
Rules Aren’t Always Made to be Broken: Five Filmmaking Pet-Peeves »