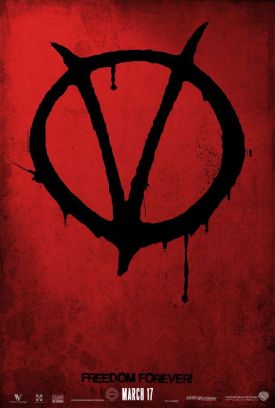 Now regarded as “one of those R-rated comic book movies released before Deadpool (2016),” V for Vendetta is notable for being one of the Wachowski Sisters’ few well received post-Matrix (1999) works. James McTeigue, first assistant director to The Matrix trilogy (1999, 2003), is credited as the film’s official director, but the Wachowskis, in addition to adapting the screenplay and producing the film, also led the second unit work (including all action scenes), oversaw the film’s editing, and ultimately controlled the final cut. For all intents and purposes, this is ‘The Lost Wachowski Film‘; there’s just one problem with that: Who the fuck cares?

V’s (Hugo Weaving) showdown with a squad of state troopers near the end of the story is the film’s highlight. #SforSlowMotion

Certain filmmakers are famous, or perhaps infamous, for being the ultimate one-hit wonders — directors who wrote and/or shot a single watershed film and then creatively crashed and burned. Directors who have spent the remainder of their career floundering in mediocrity, if not downright embarrassment, after releasing singular pop culture milestones include Richard Kelly (Donnie Darko [2001]), M. Night Shyamalan (The Sixth Sense [1999]), and so far, Neill Blomkamp (District 9 [2009]). One could debate whether a particular work by these or similar filmmakers doesn’t deserve as much hate as another, but the overall career impact of writer-directors like them can be summed up by one title, and one title only.

The Wachowskis’ V for Vendetta does not redeem its filmmakers’ post-Matrix career (nothing has, so far), and thus they belong on cinema’s list of all-time most memorable one-hit wonders. Allow me to explain in excruciating detail why this fails as a movie, including how those failures have little to nothing to do with the story’s departure from Alan Moore’s graphic novel.

Effective anti-totalitarian, anti-fascist movies in the vein of George Orwell’s Nineteen Eighty-Four (1949) are still being produced in this day and age, from Equilibrium (2002) to Inglourious Basterds (2009) to the Wachowski’s own Matrix. These stories can devolve into hamfisted social commentary if their authors aren’t careful, but strong characterizations, an interesting or off-kilter premise (e.g. The Matrix’s cyberpunk aesthetic and then groundbreaking virtual reality setup), and stylized presentation can flesh out this timeless if otherwise simplistic formula. Vendetta does none of these things, and while its heroes stop short of self-parody, they lack the depth, dialogue, and performances to sustain themselves for over two hours of running time, in addition to the story’s terrible pacing and generic, heavy-handed premise.

The film’s lackluster characterizations begin with Hugo Weaving’s titular character and Natalie Portman’s female lead. While I am a fan of both actors, Vendetta represents a low point in their careers as far as I am concerned. Portman acted better in the Star Wars prequels (1999, 2002, 2005), while Weaving’s performance is neutered by both the prominent Guy Fawkes mask he wears throughout the film as well as McTiegue’s (or the Wachowskis’?) forgettable blocking. If Dredd (2012) is a great example of how a costume can enhance a character, Vendetta represents the opposite extreme. Scenes between Weaving and Portman are boring, though not much worse than Weaving’s few scenes opposite villainous supporting characters. Portman looks constipated in every dramatic sequence that requires her to cry, while her chemistry with both Weaving and supporting actors like Stephen Fry are lacking.

Many of these awkward interactions are a function of the screenplay’s heavy-handed themes and unbelievable premise. The villains, with the possible exception of Tim Piggot-Smith as Peter Creedy, are caricatures of totalitarian, Big Brother-esque figures or similar right-wing, authoritarian cliches. I’m no disciple of Alan Moore, but my passing familiarity with the source material’s more ambiguous political overtones doesn’t flatter the film adaptation’s simplistic, black-and-white portrayal of extremist neoconservatism. Produced after George W. Bush’s reelection and during the height of the Iraq War, Vendetta reeks of warmongering and racist fearmongering hysteria. The Wachowskis’ depiction of an authoritarian government opposed to Jews, Muslims, homosexuals, atheists, and immigrants (… yep, got the liberal nightmare full house, there) is so over-the-top it’s a wonder the film didn’t do Fahrenheit 9/11 (2004) box office numbers.

Top: Hugo Weaving wears a costume that perfectly sums up the problem with his character. Middle: Citizens of London assemble during the film’s final act, all dressed in Guy Fawkes-masks. Bottom: Natalie Portman stares at nothing in her terrible haircut.

Mainstream audiences eat this shit up (see Avatar [2009]). With that in mind, I understand either the studios’ pressure or the Wachowskis’ inclination to deviate towards a more modern interpretation (re: reconfiguration) of Moore’s fascist-anarchist analysis, but the execution just doesn’t cut it. Equilibrium wasn’t a complex take on 1984 by any means, but its stylized riff on totalitarianism combined with its imaginative action sequences breathed life into old formula, which is something Vendetta’s bland adaptation doesn’t do. To that end, Vendetta’s clunky direction and limited action scenes, combined with its inconsistent characters, emphasize its hamfisted political commentary that much harder.

Speaking of those action sequences, they’re almost nonexistent to the point where I’m shocked Vendetta was marketed as an action film (obvious box office incentives notwithstanding). The aforementioned screenplay problems necessitate some form of aesthetic variety, but well over 3/4 of the film’s running time is bland melodrama. Its lone notable action sequence features V’s brutal takedown of a squad of shocktroopers, but this action-packed “finale” is too little, too late.

A few stylish flashbacks aside, Vendetta has all the cinematic flavor of a high-school play, devoid of much tension beyond long, drawn out diatribes about cultural diversity, acceptance, civil rights, etc. These Avatar-type indulgences in heavy-handed sociopolitical commentary are the killing blow to the film’s narrative core, unsupported by either memorable characterizations or directorial flair. Vendetta’s adult rating saves it from being completely toothless, but it has neither the brains nor the brawn to execute its headstrong premise. As both a political allegory and as an action-thriller, the “Lost Wachowski Film” cements its auteurs’ legacy as defined entirely by their 1999 magnum opus. I say be grateful for that.

SUMMARY & RECOMMENDATION: V for Vendetta is the cinematic equivalent of a pansy-ass, liberal arts hipster attempting a political protest, with all the accompanying melodrama, long-windedness, and wannabe intensity therein expected. Both the story’s premise and its execution are hamfisted and simplistic, stooping to the lowest common denominator with Big Brother caricatures, self-righteous monologues, and dialogue groaners like, “Ideas are bulletproof!” Hugo Weaving and Natalie Portman had to give career-best performances to save this film, and yet both are miscast or misused.

— However… the final action sequences are intense and well choreographed, while certain flashback sequences are shot with a sense of style, color correction, and rapid editing that the main storyline lacks.

—> NOT RECOMMENDED; F for Forgettable.

? Who? Who is but the form following the function of what, and what I am is a man in a mask. Huh?

I love movies, music, video games, and big, scary creatures.
View all posts by The Celtic Predator »
« ‘Alien: Covenant’ (2017): The Strangest Sequel in the Franchise?
‘Gangs of Wasseypur’ (2012): A Stylish, Multigenerational Crime Saga »