Not far behind juvenile American comedies and oversaturated animated kids films are Hollywood’s modern horror flicks on my “most irritating mainstream film genres” shit-list. While it’s easy to dismiss modern studio horror pictures as derivative and boring (… which they are) in comparison to classic scary films of yesteryear like The Exorcist (1973) or Rosemary’s Baby (1968), it’s important to remember, as always, that we only recall the best or most influential films of each genre decades later. We tend to forget the mediocre to bad films of previous generations because they’re, well, forgettable. Many general audiences today consider Saw (2005-2010) creator and Furious 7 (2015) director James Wan to be one of the more reliable, quality “auteurs” in modern Hollywood horror filmmaking; while it’s true his features are nowhere as lazy as the Paranormal Activity series (2009-2015) nor as exploitative and over-the-top as Eli Roth’s filmmography, in no way is he a unique or innovative horror-director. If anything, his work is as generic and predictable as any mediocre-to-terrible horror franchise today because his style is so safe, by-the-numbers, and hopelessly not scary.

Top: Lili Taylor (right) seeks help from The Warren’s (Farminga, center, and Wilson, left) about a haunting in their house. Bottom: Was anyone else laughing during this? ‘Cause I was laughing…

Three of the most overused cliches in modern horror filmmaking are (1) Torture or gore-porn (e.g. Saw, Hostel [2005, 2007], The Green Inferno [2013]), (2) Found-footage “cinematography” (e.g. Paranormal Activity), and (3) Jump scares (e.g. things that go BOO!). While it could be argued that Wan has perfected the latter about as well as any mainstream filmmaker could at this point, his immense over-reliance on the technique combined with his preference for bland screenplays make his movies so boring.

Case-in-point, 2013’s “breakout” horror feature and box office smash, The Conjuring. The film is yet another derivative knockoff of William Friedkin’s The Exorcist (1973), which perfected the possession-concept to such a degree it’s a wonder so many studios and filmmakers have attempted to replicate its success besides, you know, money. It’s further amazing how few people, both filmmakers and audiences, understand exactly what made that mecca of possession films work so well. The Exorcist took considerable time establishing that no explanation, biological or otherwise, could justify  the unnerving behavior and symptoms of its central victim but the malevolent supernatural; this allowed for extended sequences of dread and foreboding, building unforgettable tone and developing characters that took the horror before them deadly seriously.

Most every possession/Exorcist-clone that’s come after, The Conjuring included, rushes through its first act with forced jump scares, loud noises, and furniture that magically rearranges itself to its characters’ “horror.” Various things go bump from time to time, a few body parts or semi-spooky ghosts will walk in and out of frame, but nothing truly horrifying or threatening ever occurs until the film’s final twenty minutes. Our central family experiences a series of comical, borderline goofy surrealist visions and sequences, and then summon the help of married “demonologists” Ed and Loraine Warren, played by Patrick Wilson and Vera Farmiga, respectively.

Maybe they weren’t called demonologists. Maybe they were referred to as “paranormal investigators.” Whatever. I don’t care. They’re defined so carelessly I can’t take them seriously in any context.

What follows is another series of even more random, nonsensical gags, such as the Warrens deducing a repeating trio of bumps as a demon mocking “the Father, the Son, and the Holy Ghost.” Huh? More incoherent, rationalized mumbo-jumbo follows and various family members get dragged by their hair or pushed around by invisible ghosts or evil spirits or whatever the hell the antagonist(s) are supposed to be. Scenes like these play like comedy bits or parodies of what a good horror movie sequence might be. Even if you sidestep the incredibly convenient narrative setup and demon lore (e.g. every demon seems to have an explicit Judeo-Christian origin, the boundaries and limits of possession seem to change with every act), the execution of these “haunting-scenes” are not the least bit scary or even creepy, but rather make me want to laugh out loud. Wacky hijinks like a girl getting thrown around and tossed across the hall by a supposed invisible corporeal presence, all while their family members scream and shout and race after them, is hysterical.

Much like how I am in constant disbelief at the alleged humor general audiences guffaw at in broad comedies from Judd Apatow, Paul Feig, Seth Rogan, or Adam Sandler, I must ask a similar question of these generic horror films: Do people actually find this stuff scary? Jesus, how do you people even sleep at night when your refrigerator makes a noise? 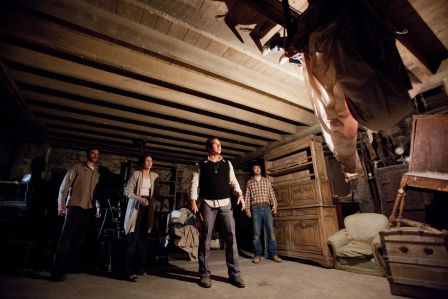 The one mildly creative sequence in the entire film: The impromptu exorcism-finale.

In the end, I could summarize the first half of The Conjuring as a series of random noises and irritating jump scares, and the second half as a laugh-out-loud, nonsensical, hamfisted comedy routine. I appreciate the class with which Wilson and Farmiga approach this schlock-story, and the film ends on a stronger note with its concluding exorcism scene, but the majority of the film alternates from sheer boredom to unintentional farcical slapstick. Forget Apatow, man, possession films are where the real jokes are.

SUMMARY & RECOMMENDATION: While the film boasts decent production values and a halfway decent finale, as well as committed performances from Wilson and Farmiga, The Conjuring is too self-serious, tame, and unimaginative to inspire much fear unless the idea of moving furniture terrifies you. I suppose it terrifies a lot of people, apparently, so maybe you’ll get something out of this repetitive Exorcist-knockoff. I sure as hell didn’t.

? So if I hear just one knock, does that mean it’s a Jewish ghost or a Muslim ghost? ‘Cause they’re both pretty monotheistic. What if I hear a bunch of different knocks all at once — are those Hindu demons? What if I’m an atheist? Will none of this shit bother me, then? Maybe this film is secretly the most effective subliminal secular story of all time.