Anyone who remains on the “Fox should give all their stuff to Marvel!” -train should have their head examined. While yes, a studio like Sony has clearly lost their way in most big-budget endeavors (e.g. The Amazing Spider-Man films [2012, 2014], probably the upcoming Ghostbusters [2016] reboot as well), and no one seems to want another Fantastic Four (2015), 20th Century Fox clearly has a hold on their X-Men franchise. With original franchise director Bryan Singer back in the fold, Days of Future Past (2014) debuted with the highest ratings and box office of any film in the franchise yet, and many fans, of which I am one, consider it among the best of the X-Men series and one of the better comic book-movies ever made. 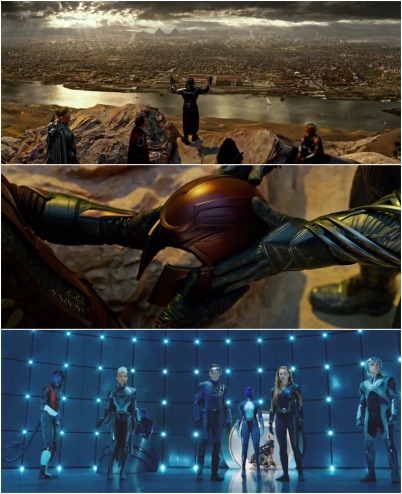 Top & Middle: Everything they’ve built will fall, and from the ashes of their world, we’ll build a better one! Apocalypse arms his “Four Horsemen” for the earth’s cleansing. Bottom: The new X-Men class has arrived.

While studios like Marvel seem content to churn out one formulaic origin-story after another (e.g. The Incredible Hulk [2008], Thor [2011], Ant-Man [2015]) and forgettable villains-of-the-week, both Fox and Warner Bros. are at least willing to take risks in their storytelling formula and invest in memorable antagonists (e.g. The Dark Knight trilogy [2005–2012], X-Men [2000], X2: X-Men United [2003]). Sure, some risks burn them in the butt (e.g. the divisive reception to Man of Steel [2013] and Dawn of Justice [2016]), but at least they try different things from time to time, not that comic-fans tend to care about variety. Remember that Deadpool (2016) movie? They should just give it to Marvel!

In any case, let us discuss the latest cornball superhero feature in this super-stuffed year of superhero films: Bryan Singer’s X-Men: Apocalypse. I was worried when trailers for the film showcased action that reminded me of a Power Rangers episode, and the film received decidedly mixed reviews. However, those worries were unfounded and X-Men fans should enjoy the hell out of this movie. It’s somehow the most epic X-Men movie yet, the largest in scale by far, and yet it maintains a level of restraint as well as relatable characters that films like Age of Ultron (2015) and Man of Steel (2013) forsake in favor of endless, over-the-top digital FX.

That’s not to say that Apocalypse isn’t FX-heavy — we’re dealing with the most powerful mutants in the X-Men cannon, here — but Singer holds back until the would-be apocalyptic finale, and keeps most of his action set-pieces on the ground. James McAvoy’s Charles Xavier and Michael Fassbender’s Magneto remain the film’s — and the series’ — most interesting characters, and their relationships with the supporting cast drive the narrative as they should. Though Oscar Isaac’s antagonistic role verges on the “villain of the week” trope for which the Marvel Cinematic Universe (MCU, 2008-present) is often criticized, the titular Apocalypse is at least fun, memorable, and intimidating despite being a stock character. He’s a worthwhile nemesis to both Fassbender and Xavier.

The cast as a whole reminded me of the youthful, spunky, humorous crew from J. J. Abrams’ Star Trek reboots (2009, 2013), which may or may not appeal to various audiences depending on how much one liked those rebooted films. I might have had more fun watching characters joke amongst each other in Xavier’s school and bicker while figuring out how to escape Colonel Stryker’s (Joshua Helman) Weapon X-facility than I did with any of the action sequences themselves. I liked the film’s depiction of their powers, their banter, their personalities, and their development.

As for the FX-driven action, it ranges from mutant “tough-man” cagefights a la the original X-Men to another zippy Quicksilver (Evan Peters) slow-motion showcase to a CGI-heavy finale in Egypt to a Matrix (1999)-style “mind-battle” between Xavier and Apocalypse. This film has one of the more diverse collections of action scenes I’ve seen in a blockbuster in some time, and it executes most of them well. From the excellent lighting in McAvoy’s telepathic fistfight to the grand, almost operatic introduction of Apocalypse in the prologue, to the excruciating sound editing when Isaac smashes Quicksilver’s knee backwards, this latest X-Men feature boasts admirable production values.

This is not to say Apocalypse doesn’t have many shortcomings; in descending order of offence, the film is about 25-30 minutes longer (144 minutes total!) than it needed to be, features several unnecessary minor characters (e.g. Olivia Munn’s cornball Psylocke, Ben Hardy’s Angel, Rose Byrne’s Moira MacTaggert, etc.), and concludes its story with a nonsensical ending. I stated above how consistent the film’s many action sequences were, but in the interest of streamlining the narrative, multiple set-pieces should’ve been jettisoned, and the cast should’ve been cut in half. This is all in addition to how tired Jennifer Lawrence acts in her role as Mystique, as well as the unsatisfying relationship between Evan Peters’ Quicksilver and Fassbender, which yields zero payoff. Apocalypse in many respects plays similarly its predecessor, Days of Future Past, just bigger in terms of the size and scope of its digital FX, but given all its bloat, pandering fan service, and standard-issue CGI schlock, it feels smaller.

In any case, I recommend you check out X-Men: Apocalypse if you’re a fan of previous entries in the series by Bryan Singer. This felt the most like the X-Men Animated Series (1992-1997) out of all the feature films thus far, which is a compliment coming from me. Problems with the movie’s length and crowded cast are criticisms worth considering, however, so those looking for anything other than generic blockbuster fair will be disappointed.

SUMMARY & RECOMMENDATION: X-Men: Apocalypse is Bryan Singer’s biggest X-Men film to date, and while it’s not his best, it boasts great characters, a wonderful cast, and solid action sequences. The film retreads plenty of thematic ground from previous installments, but manages to make its narrative feel fresh with a decent script and a threatening villain, courtesy of Oscar Isaac.

— However… Apocalypse is way longer than it needed to be, and its longwinded ending (not counting the Danger Room-epilogue) feels too convenient. Though she’s not in the film as much as the movie’s marketing would have you believe, Jennifer Lawrence looks tired of her role, and Evan Peters’ relationship with Michael Fassbender remains cryptic for no reason. Olivia Munn (Psylocke) sucks.

—> ON THE FENCE.* General audiences looking for reliable popcorn entertainment and fans of the animated series will get a kick out of this, but if you’re looking for a quasi what-if-superheroes-were-real(?) story a la Zack Snyder or if you’re a comic purist who’ll only accept interconnected lore a la The Marvel Cinematic Universe, stay away.

? So, are we gonna get another, non-Brett Ratner Dark Phoenix Saga?

I love movies, music, video games, and big, scary creatures.
View all posts by The Celtic Predator »
« ‘The Jungle Book’ (2016): A Generic Adaptation of a Generic Story
‘The Conjuring’ (2013): The Most Overrated Horror Phenomenon of the 2010s »