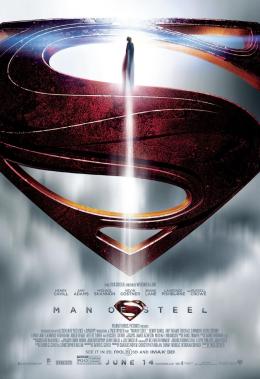 The original superhero has seen his fair share of big-screen action, what with the original motion picture series being released to significant commercial success throughout the 1970-1980s. Recently though, aside from a brief appearance in 2006 with Superman Returns, the world’s most recognizable superhero hasn’t seen much action as far as feature-film releases go, with most of the comic book-attention being divided between Christopher Nolan’s reborn Batman franchise (2005, 2008, 2012) and the Marvel’s Cinematic Universe (2008-present). It seems that, until now, the original American icon that is the one and only Superman, has been overlooked for reasons unknown.

That was the case until Man of Steel was announced a couple years ago, with the main news of interest being the Dark Knight team of Christopher Nolan and David S. Goyer would produce and write the script, respectively, while Zack Snyder, of 300 (2007) and Watchmen (2009) fame, would direct. From the crew’s credentials alone, there seemed to be an obvious attempt to make DC Comic’s Superman more like the Dark Knight trilogy, with a noted emphasis on grounded combat and darker emotional undertones. 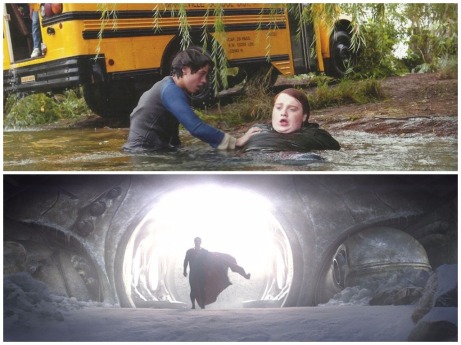 Clark must journey from the boy with a conscious (above) to the Man of Steel (below).

The only thing that puzzled me was how a Superman-movie would function in a grounded, realistic universe similar to the Dark Knight films. The simple fact that Superman can fly, shoot lasers from his eyes, is faster than a locomotive, and can leap buildings in a single bound, would seem to clash with the toned-down, relatable world of Nolan’s Batman. This was the main question in my mind as I awaited Superman’s return to the silver-screen. Ultimately, the dilemma was how could Nolan’s style come to grips with the unique world of Superman? How could one pull it off in a way that was grounded, modern, and most tricky of all, realistic (at least by comic book-movie standards)?

In the end, the team of Snyder, Nolan, and Goyer came to grips with how to make Superman succeed in a modern-day environment that echoed The Dark Knight, but the end product is far from flawless. Man of Steel (MoS) is at its best when its story remains a personal, intimate one. While the special FX are cool, the whole experience sinks or swims on the character of Clark Kent/Kal-El/Superman (Henry Cavill). It doesn’t compare well to Nolan’s origin-story in Batman Begins (2005), which felt incredibly personal from it’s protagonist’s humble beginnings to triumphant superhero creation. That’s not to say that MoS doesn’t also feel emotional, it just doesn’t match the raw feelings of Bruce Wayne’s transformation into Batman.

Where it does match Batman Begins is in its overall structure. Like the Batman-reboot, MoS starts with its protagonist as a young adult, following his slow transformation into the hero we know he will become, with a heavy emphasis on out-of-order flashbacks to establish the character’s childhood backstory, motivations, and family history. This framework functions alright, but it isn’t as fluid as Nolan’s implementation. Clark Kent is likable enough, but he’s not the outwardly relatable, tortured soul that was Christian Bale’s Bruce Wayne. Cavill feels too reserved and soft-spoken to convey much of a colorful personality, and both he and various supporting castmembers struggle with David S. Goyer’s hokey, inconsistent dialogue.

As for the action, it’s quite good. Snyder’s trademark visuals come through in a big way, both in the action set-pieces and in the scenes where Superman learns to master his flying abilities. The opening battles on Krypton and Superman’s duel with Faora-El (a stoic yet memorable Antje Traue) in Smallville are both standout sequences, and take advantage of the Kryptonites’ bizarre powers against an Earth-friendly physics universe. The battles consist of a unique mix of grounded close-quarters-combat with almost Dragonball Z-esque anime-violence. It’s safe to say that I haven’t seen anything like it in a movie before, and for the most part, this superhero violence works very well.

Unfortunately, things get out of hand in the action-packed finale. The more realistic physics give way to cartoony set-pieces involving alien tentacles chasing Superman through the air and endless montages of urban destruction. What’s most disappointing is the final confrontation between Superman and General Zod, which devolves into a Mew vs. Mewtwo-style of combat, with ballerina twirls and “super-punches” aplenty.

It’s unfair to keep comparing this film to Begins, but the way MoS is constructed echoes the deeper, more effective character growth of that Nolan-directed movie. This movie’s characters and story feel like Begins, but not as strongly developed. Man of Steel‘s action is a step above its fledgling Batman counterpart with director Zack Snyder at the helm, yet its characterizations and your emotional investment in the narrative lag behind Bruce Wayne’s origin-story by a considerable degree. The comparison between these two superhero reboots explains why Begins was much better received than MoS.

With all that said, Man of Steel powers through with its intimate, if reserved focus on Clark Kent the man — not necessarily the superhero — as well as its high-profile, FX-enhanced violence. I would be lying if I didn’t admit the movie’s style was memorable, though for many audiences, Man of Steel may be memorable for the wrong reasons. The film’s narrative has significant limitations due to its cartoony violence, overuse of CGI, and most importantly, a disorganized narrative structure that limits its characters’ potential. On the other hand, it’s refreshing to watch a Superman-film where Kal-El does more than lift heavy objects, with all due respect to the late, great Christopher Reeve. For better or worse, this is the appropriate Man of Steel for the modern age, Generation X-nostalgia be damned.

— However… the finale is a cartoony, jumbled mess. Much of the dialogue is hokey and repetitive, with too many people referring to Clark as a Messiah too many times before he actually becomes one. The flashbacks should have been structured in order.

—> ON THE FENCE: I’m square in the middle of MoS-fans who adore this film and MoS-haters who loath it. The film is neither a digital FX-heavy mess, nor the second coming of Jesus Christ.

? Will the shared fictional universe of DC pan out?