Depending on which sources you cite, Spectre, the twenty-fourth Bond movie from Eon Productions, cost $245-300 million to make and is officially listed as one of the most expensive films ever made. The production went far over budget, has been floating between a 60-65% on Rottentomatoes for the past week, and may well turn out to be the most divisive Bond feature of the Daniel Craig era.

Usually during these love-it-or-hate-it affairs, I rarely pick sides and tend to rest comfortably in the middle of civil wars like Man of Steel (2013) or Interstellar (2014). That’s also the case here, to a large extent, though my personal enjoyment of Spectre feels above the average serious Bond fan. Compared to the rest of Craig’s Bond outings, I stand by Casino Royale (2006) as my favorite, but would place Spectre just behind the beloved Skyfall (2012), a not so lowly third place. That means I don’t think of Spectre as a huge comedown, if any, from Sam Mendes’ previous installment, another film I enjoyed but also found slow and possessed action so “artsy,” I struggled to decipher fight scenes in near total darkness.

For my part, Spectre finds the cinematographic middle-ground between the Bourne (2002, 2004, 2007)-esque, violent action of Casino Royale and Quantum of Solace (2008) and the suave, low-key, colorful style of Skyfall. Visually speaking, it combines the best elements of the three previous films into a memorable form. It boasts a variety of scenic locations, from Rome to the Austrian Alps to Mexico City during The Day of the Dead to the deserts of Morocco; it also sports the largest variety of Bond gadgets of the Daniel Craig era, including “Smart Blood” nanotechnology and a flamethrowing Aston Martin. On the other hand, Craig’s Bond remains as vicious as ever in close-quarters combat and shootouts, with Mendes this time allowing for adequate lighting so we can see what the fuck is going on.

From a thematic standpoint, the story’s frequent references to previous Bond films of the Craig era are tolerable because I bought the romance between Craig and the newest Bond girl, Lea Seydoux. Seydoux’s character is fleshed out and connected to previously established characters of this new millennium Bond-era, which helped me relate to her relationship with Craig’s Bond, which isn’t a throwaway plot-device. Not only is she given plenty of screentime and is well acted, but her character is allowed room to breathe so that I actually found myself caring about her and her relationship with Bond, a first since Eva Green’s Vesper Lynd in Casino Royale. I think this is a big sticking point that determines whether or not people like this film. I liked Seydoux’s Madeleine Swan and invested in her connection to Craig, and furthermore I appreciated how this relationship intertwined with Christoph Waltz’s Ernst Stavo Blofeld. This seems to be the key that turns people for or against the story.

Many critics also bitch about Waltz’s underdeveloped villain and his convoluted scheme for world domination. While it’s true this role is more of a minor one for Waltz than another subversive Oscar-winning performance, I found Waltz to be plenty menacing and a fun return to old-school Bond bad-guys. Moreover, when has a Bond villain’s plot not been convoluted and confusing? Even in Casino Royale, which I otherwise loved, the plot itself was obscure and difficult to follow, something that has long been a staple of the franchise. You could say similar things about Spectre and nitpick its exaggerated premise of evil, cloak-and-daggers syndicates, but at the end of the day, the characters’ motivations are clear, the narrative’s mystery unfold naturally, and is no more convoluted than the like-minded Winter Soldier (2014). 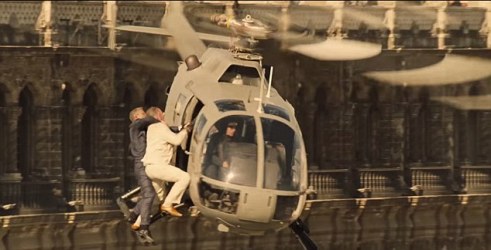 Bond dukes it out with a baddie in the pulse-pounding opening scene in Mexico City.

So, what didn’t I like about this movie? Well, other than the frivolous plot details I mentioned, I was disappointed by Monica Bellucci’s glorified cameo and thought her talents were wasted. I also thought the film’s commentary on surveillance and personal freedoms were heavy-handed. Seydoux has her share of cornball dialogue with Craig, and their relationship progresses to “true love” so fast it’s unbelievable. Minor villain roles, including Andrew Scott, leave much to be desired.

Spectre straddles the extremes of Bond-worlds across the wink-wink, classical adventures of the past and these modern films of grit, grime, and semi-realistic characterizations. Spectre matures Bond while no longer keeping him at arms’ length as much of the contemporary franchise has done, and this strategy pays off by story’s end. I maintain my favoritism of Casino Royale, but for my part, if this is the official sendoff of Craig’s Bond, I am satisfied with that. Is it consistent enough to recommend to all thriller aficionados? No, but for most audiences, it’s of a high enough production value to operate just fine.

— However… Bellucci isn’t the cougar Bond-woman we wanted, nor is Waltz the majestic return of Blofeld that we deserved. Parts of the film’s commentary on 1984-type surveillance are tiresome, as are aspects of the convoluted, world takeover-plot.

—> ON THE FENCE: General audiences will find it entertaining enough, but I admit the script is, top to bottom, quite sloppy.

? You’ve got a secret. Something you can’t tell anyone, because you don’t trust anyone. Yes, thank you, Monepenny, for defining exactly what a secret is. That’s like the, “If something chases you, run!” line from Jurassic World (2015) — if something’s “chasing you,” that implies you’re already running from it! Jesus!

I love movies, music, video games, and big, scary creatures.
View all posts by The Celtic Predator »
« ‘Bridge of Spies’ (2015): A Mediocre Historical Drama for Your Parents
‘Prem Ratan Dhan Payo’ (2015): Salman Khan Tones It Down »