It’s been fourteen years since the last Jurassic Park (JP, 1993) film (Jurassic Park III [2001]) and over twenty years since the last good Jurassic Park film, and to make a long review short, Colin Trevorrow’s Jurassic World (JW) lives up to the hype. While the second-time director and first-time Hollywood blockbuster filmmaker doesn’t out-direct vintage Spielbergian spectacle from the 1990s, nor does the movie show much restraint in terms of computer generated imagery (CGI), this new sequel’s script is arguably the strongest of the series and recalls the weary corporate and genetic-engineering paranoia of Michael Crichton’s original book better than the rest.

Let’s discuss the script: The most important part of the much debated and fought over story (officially credited to four different people, including Trevorrow) is that it gives us a multitude of well-written, likable characters. It doesn’t hurt that everyone’s well cast in their respective roles, but the best are Chris Pratt’s Owen Grady, Bryce Dallas Howard’s Claire Dearing, and Vincet D’Onofrio as the film’s military-industrialist villain. These three form the lead-trifecta that generate most of the character drama, and in combination with original JP alum B.D. Wong, comment on the film’s underlying themes and almost tongue-in-cheek self-awareness.

Much press has followed the series’ latest iterations’ supposed abandonment of the franchises’ cutting edge scientific accuracy and “descent” into pure fantasy, but a fantastic conversation between B.D. Wong and Irrfan Khan point out how little about Jurassic Park has been realistic or reasonable since the beginning. We don’t want realism, Wong points out bluntly, to both Khan and the audience upon being questioned about the Indominus Rex’s genetic origins, we want fantasy. If the creatures of JP had been recreated with 100% accuracy from the beginning, they would look very different.

This thematic analysis and franchise introspection extends throughout the story, proving this film is much more than the mindless run-away-from-monsters cash-grabs that the first two sequels were. The classic Spielbergian reverence and childlike adoration of the dinosaurs themselves remain in spades through Ty Simpkins and Nick Robinson’s child-characters (also nephews to Howard’s character), but the bold-faced glee of going to a zoological park filled with ancient creatures is only the icing on this blockbuster cake. Most of the film contemplates the merits of genetic engineering and genetic modification, the ethics of keeping such large and dangerous animals in captivity or in isolation (there’s a strong Blackfish [2013] undertone throughout), and even questions the dynamic of corporate satiation of increasing customer greed.

The main antagonist of the film is of course the hybridized Indominus Rex, which was designed and funded by corporate focus groups in response to customer boredom with the older animals. Howard notes, “Corporate thought that genetic modification would up the ‘wow-factor.’ ” To which Pratt replies, “They’re dinosaurs! ‘Wow’ enough… “

This is probably the most amusing aspect of JW’s story, even more so than the dinosaurs eating people and fighting with each other. Given the movie’s Hollywood blockbuster heritage, I can’t help but respect Trevorrow’s tasteful commentary on this silly dynamic and having the antagonist of his film be a twisted, corporate focus-group created monstrosity.

Aside from the amusing yet highly depressing implication that people would one day get bored of “regular dinosaurs,” JW’s story gets all the basics right and executes a strong blockbuster experience. The pacing of the film is far superior to both The Lost World’s (1997) and JPIII, and arguably a notch above the original’s as well. I liked the cross-cutting between Pratt and Howard’s battle for corporate control and Simpkins and Robinson’s exploration through the park as tourists; they give us two opposite experiences of the JW-setting and come together naturally.

Now let’s cover the stuff I didn’t like: While Simpkins and Robinson’s perspective was necessary to tell a classic JP tale, and for child actors they performed fine, I didn’t find their backstory nor their fretting over an alleged divorce between their parents very captivating. I actually enjoyed the angle between their Aunt (Howard) and their mom, Judy Greer, whose grown-up sister banter was cute, but felt that relationship could’ve been fleshed a bit more for humor’s sake if nothing else. Also, while I love D’Onofrio, his mustache-twirling and penchant for evil scheming grows silly by the end of the movie. 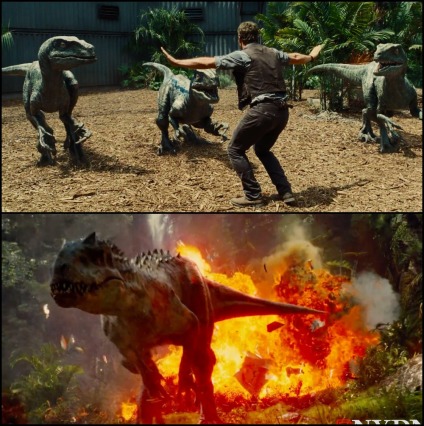 Top: The raptors are as fearsome and vicious as ever, though this time around they do occasionally take orders from Starlord. Bottom: The Indominus Rex, visually resembling something akin to a Ceratosaurus, Allosaurus, or Giganotosaurus, doesn’t fuck around.

As for the elephant in the room, no the CGI’s not as good as the effects from the first JP or even TLW. It’s about on-par with JPIII, but that’s largely OK given how the story around them is so strong and they’re animated in such cool ways. Much of the blockbuster-appeal of this film over the others is that we finally see the big dinos (and their captors) go at it full-force and it’s not a disappointment for once: (Spoilers, I guess…) Ankylosaurs battle it out with the I. Rex, the Mosasaur eats a pterodon, whose numerous cohorts wreak havoc upon hundreds of tourists, Khan and his security team unload everything from .50 cal machine guns to rocket launchers at the I. Rex, raptors team up with humans and the I. Rex at one point, and of course there’s the worst kept secret about the final dino-battle that I won’t reveal for those out of the loop.

That’s why this movie works for me: It ups the action-ante on all its predecessors despite the over-reliance on digital effects, and yet has the brains to comment on all this while relying on strong characters and good dialogue to hold its extraneous parts together. People reluctantly giving this film a pass for its cool dino moments while lamenting its supposed thematic shallowness aren’t giving the writing enough credit. Jurassic World somehow manages to be the massive, blockbuster rebirth of Jurassic Park’s iconic beasts we’ve awaited for so long, yet it has the balls to ask hard questions of its audience about what all this wacky shit means.

SUMMARY & RECOMMENDATION: Jurassic World’s script is shockingly its strongest weapon, creating a setting with scale and a story that boasts likable characters, all the while never letting the audience off the hook for its absurd yet amazing power-fantasy. Speaking of that fantasy, the dinosaurs are ferocious and terrifying. There’s too much CGI for my tastes, but what’s presented is impressive and works for the film. That final battle is an act of contrition for JP III.

— However… Simpkins and Robinson are well played but their backstory is hollow. D’Onofrio becomes a parody of himself by the end.