Mexican auteur Guillermo del Toro has a heart for the misunderstood and the monstrous. Most of his films pertain either to lonesome misfits, fantastical and mysterious creatures, or both. His love of idiosyncratic beasts includes both humanized vampires (Cronos [1993]) and modernized vampires (Blade II [2002], The Strain [2014-2017]) as well as more imaginative monsters from within (The Devil’s Backbone [2001], Pan’s Labyrinth [2006], Crimson Peak [2015]) and without (Mimic [1997], Hellboy [2001], Pacific Rim [2013]) humanity.

2017’s The Shape of Water, described by its co-writer, co-producer, and director as his “proudest” and “favorite” movie thus far, fits into the latter category; it focuses not on vampires or vampiric offshoots, but on another original del Toro beast, the charismatic amphibious humanoid flaunted in the film’s marketing. To the surprise of no one, this film’s antagonists are not the monstrous from without, but rather those from within, the cruelest and harshest of humanity, embodied with sardonic, gratuitous enthusiasm by standout Michael Shannon.

Feel the shape of water.

Before we cover The Shape of Water’s villainy in depth, however, let us analyze the film’s quasi-non-traditional good guys and overall romantic drama structure. Sally Hawkins’ mute lead, Elisa Esposito, is classical in the sense she’s a lonesome social outcast, an introvert with hidden charm and empathy to spare, while unorthodox in her lack of speech capabilities (she performs sign-language throughout the movie) and inclination towards inter-species romance. Hawkins performs well through versatile expressions and animated signing, and her chemistry with co-star and fellow social misfit Richard Jenkins, a closeted homosexual commercial artist, is effective. Meanwhile, Octavia Spencer provides more grounded personality in terms of subtle comic relief and exposition, while Michael Stuhlbarg adds further political intrigue through a Soviet spy subplot.

Doug Jones’ “Amphibian Man,” pet research project for the morally questionable US military and eventual love-interest for Hawkins, is brought to life by incredible prosthetics and commendable sound mixing; it is a believable sci-fi creature that, while somewhat humanized and sympathetic, is not sanitized or cheap. Think of it this way: The Shape of Water’s underdog creature is like District 9’s (2009) bug aliens, not Avatar’s (also 2009) blue elf Na’vi. The former were endowed with minor sympathetic features, such as humanoid eyes, but otherwise were decidedly non-human and not adorable. They were humanized through the narrative and their emotional connection to the protagonist, Sharlto Copley, and by extension, the audience. They earned our sympathy, or rather, empathy. On the other hand, the Na’vi of Avatar ( …most sympathetic creatures in heavy-handed blockbusters, as a matter of fact) were portrayed as cartoonish and perfect “noble savages” against the comically evil military industrial complex.

While aspects of The Shape of Water flirt with ineffective social commentary within Cold War era America, and Shannon chews the scenery with his villainous dialogue, focus is kept on Hawkins’ relationship with Jones, and that core of the movie functions well. Much of their relationship is told through montage sequences, with which I was not thrilled, but Hawkins’ performance and Jones’ subtle expressions, in conjunction with the FX team’s prosthetic work, sell their emotional development.

Most of del Toro’s direction centers on Shannon’s memorable villain, an authoritarian stock villain archetype elevated by its actor’s performance, narrative details, and del Toro’s framing. Shannon has become type-cast as a bad guy in recent years, most notably in Zack Snyder’s Man of Steel (2013), but since the shoe fits, I say wear it. Flaunting perhaps the strongest performance in the entire film, Shannon’s egotistical crusade feels justified at every plot-point, while his terrifying rants, memorable SteadiCam long-takes, and effective framing behind glass planes and rain FX portray him as the true monster of this picture; then again, the appeal of Shannon’s antagonist mirrors that of Jones’ sympathetic creature in that neither is cliched. Shannon is an interesting villain because he is not one-dimensional; while he enjoys his fair share of bad guy-lines, again, Shannon’s delivery sells them while cinematographer Dan Laustsen’s camerawork deepens them. 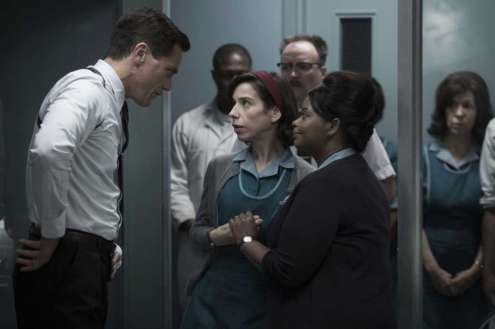 Rounding out The Shape of Water’s idiosyncratic strengths are its use of color and music. Much of the film’s soundtrack consists of diegetic period song and dance, of which Hawkins’ protagonist and Jenkins’ supporting character are both fans. Brief scenes of them practicing musical routines culminate in an ambitious, memorable dream sequence where Hawkins imagines herself on stage with the Amphibian Man. Del Toro’s cool, dark color tones give way to high-key lighting in black-and-white cinematography, a celebration of non-traditional romance whereby Hawkins and Jones, the latter in full creature FX and makeup, dance — and in Hawkins’ case, also sing — their troubles away.

Though The Shape of Water is unlikely to turn a profit given its limited release schedule in the USA and abroad, its critical reception and unmistakable del Toro characteristics ensure its long-term survival. It is one of the Mexican filmmaker’s strongest films to date, finding a near perfect balance between del Toro’s passion for the beastly and affection for misfit stories with heart. I remain undecided on his use of dialogue, the story’s inconsistent pacing, and more than a few sequences of sociopolitical analysis that verge on pandering, but most of these misgivings fall to the wayside when compared to the heart of the story. The Shape of Water is a Beauty-and-the-Beast tale more worthy of that classical moniker than Walt Disney’s 2017 live-action remake of its own property, and if that’s not a fitting end to this wild year in cinema, I’m not sure what is.

SUMMARY & RECOMMENDATION: Guillermo del Toro’s latest picture goes all-in on inter-species romance and social outcast rebellion, but not in all the ways a typical viewer would expect, and The Shape of Water is better for it. Sally Hawkins and Doug Jones work as the principle romance, while supporting characters Richard Jenkins, Octavia Spencer, Michael Stuhlbarg, and especially Michael Shannon elevate the remainder of the narrative. Del Toro’s latest collaboration with Danish cinematographer Dan Laustsen utilizes water FX, wet environments, and a versatile color palette to elaborate upon “the shape of water.”

— However… some of the film’s social commentary either hits you over the head or feels too surface-level. Much of the film’s dialogue is inconsistent when not chewed with abandon by Shannon.

? Unable to perceive the shape of You, I find You all around me. Your presence fills my eyes with Your love, It humbles my heart, For You are everywhere.