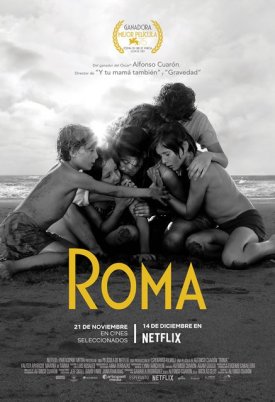 Mexican filmmakers Alejandro Gonzalez Inarritu and Alfonso Cuaron are two of modern cinema’s dearest critical darlings. Between the two of them, Inarritu has two Best Directing Oscars (Birdman [2014], The Revenant [2015]), Cuaron earned one for Gravity (2013, his last feature), while frequent collaborator and director of photography, Emmanuel Lubezki, won Best Cinematography Oscars for all three of those films. Inarritu, Cuaron, and their Jewish Mexican cinematographer have also been nominated for countless other Academy Awards, British Academy of Film & Television Awards (BAFTA), and Golden Globes before their 2010s dominance. Fellow Mexican auteur, Guillermo del Toro, the third and most populist (re: genre friendly) of “The Three Amigos,” still has catching up to do in terms of sheer arthouse worship, the immense success of The Shape of Water (2017) notwithstanding.

Yalitza Aparicio (left) bonds with one of her adopted family’s younger children.

Since the 2013 box office and critical success of Gravity, Cuaron co-created the short-lived television series, Believe (2014), but has otherwise stayed under the radar until the release of his latest feature, Roma; the ostensible “Netflix exclusive” debuted in a November limited theatrical release in a rare compromise between the original streaming giant and Hollywood. A semi-autobiographical retelling of Cuaron’s own childhood — and dedicated to his real-life nanny in the credits — Roma is his first Spanish-language film and native Mexican production since 2001’s Y Tu Mama Tambien, as well as only his second out of eight films to be photographed without Lubezki (Cuaron served as Roma’s director of photography, as well as writing, co-producing, and co-editing the feature).

Roma is furthermore a cinematographic and narrative palette cleanser, if you will, of Cuaron’s and greater Hollywood’s saturation of FX-driven cinematography and frantic, hyperactive camerawork dependent on showy, elaborate long-takes. Gravity was no comic book franchise installment, but it felt as much given its simplistic story, so-so characters, and overwhelming dependence on computer generated imagery (CGI). Though I have mild criticisms of Roma’s protagonist (non-professional and first-time actress, Yalitza Aparicio), the movie is a stripped down, straightforward, yet stylized drama that plays to Cuaron’s strengths of long-takes, emphasis on mise-en-scene, and blocking without the distracting, though memorable, handheld cinematography of Lubezki.

To say that both Cuaron’s and Inarritu’s recent films have been dominated by Lubezki’s style, such that the latter’s endless oners began to overtake the auteurs’ narratives (see Tim Burton’s career post-Ed Wood (1994), would be no understatement. Much of what makes Roma feel so refreshing, in addition to how smoothly the laid-back camerawork coalesces with Cuaron’s screenplay and slice-of-life set-pieces, is how relaxing it feels compared to Gravity and Children of Men (2006). Free of Lubezki’s impressive yet overwhelming cinematography, Cuaron’s homey, low-key, heartfelt narrative is allowed to breathe. I never thought I’d be encouraging less photographic style in dramatic cinema, but then again I never thought I’d see a great action film I felt had too much gore.

The strengths of Roma, named after the Colonia Roma neighborhood in Ciudad de Mexico, are obvious: The black-and-white cinematography, combined with mostly tripod shots and looooooooooong, smooth pans — some of which are 180-360 degree panoramas — are a perfect fit for this quasi-Italian neorealist throwback piece. Several notable sequences, including the film’s opening, start on a static shot of either immobile objects (if indoors) or bustling urban streets (if outdoors), holding for what feels like eternity before they tilt or pan to the principle actors in those scenes. The deliberate nature of these otherwise “quaint” set-pieces allows us to absorb the environment (mise-en-scene, re: the set-design), while the actors’ blocking is emphasized given their sharp mobility relative to the largely immobile camera. The glacial camera pans feel voyeuristic, as if they’re security devices monitoring the lives of our principle upper middle-class family.

Occasional tracking shots are striking given their sparsity relative to the dominant tripod shots. The former are almost exclusively outdoor lateral dollies, capturing various characters as they race from point A to B through crowded sidewalks, streets, and alleys.

Most of the problems with Roma have to do with aspects of its pacing and its lead character, the housekeeper and nanny figure, Cleo (Aparicio). I admire the understated performance and sympathetic arc of the latter, but find her sheer blank slate of a personality a barrier to empathizing with her. For most of the film, familial drama and various historical events happen to and around her; the narrative uses her more as a vessel to enter the period-piece (the movie takes place in 1970-71, when Cuaron would’ve been 10 years old) than a well defined protagonist whose actions drive the story. Her impact on the story feels akin to Ellar Coltrane in Richard Linklater’s Boyhood (2015) or Tom Hardy in Fury Road (2015), though she’s neither as forgettable as the former nor as memorable as the latter. Her character isn’t boring so much as it is superfluous to the plot, wherein most of the interesting drama is a function of either the family for which she works or the historical backdrop. 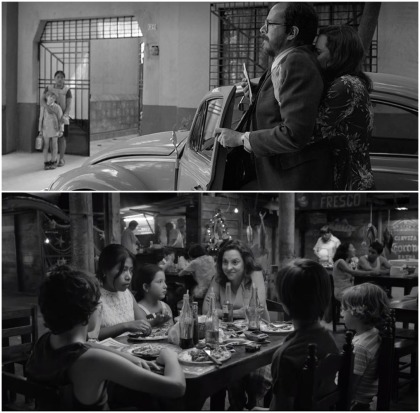 Less forgivable issues stem from the movie’s length (135 minutes) and snail’s pace. Though the latter is appropriate for the siesta-like tone of the film, several extended sequences drag for little reason and focus on uninteresting minor characters, including Cleo’s aggressive, deadbeat lover (Jorge Antonio Guerrero) and a Latin Lover cameo. These ho-hum scenes lengthen this otherwise deliberate, controlled drama past a reasonable running time, and add little thematic substance or character development.

All in all, Roma is a welcome change of pace, or perhaps return to basics, for Alfonso Cuaron and fans of dramatic cinema. It’s one of the better dramas I’ve seen this year, sporting neither saccharine messages nor on-the-nose political themes, the latter being an improvement over, say, Cuaron’s Y Tu Mama Tambien. Its identifiable visual style is a few steps above most Oscar-bait, while fitting the movie’s story, themes, and characters, unlike much of Emmanuel Lubezki’s contributions to Cuaron’s and Alejandro Innaritu’s filmmographies. Cuaron’s patient, almost voyeuristic black-and-white camerawork doesn’t call attention to itself in all the best ways, and though I can’t always say the same for the film’s lead, their combination is more than worth recommending.

SUMMARY & RECOMMENDATION: Thematically stylized yet cinematographically restrained, Alfonso Cuaron’s latest feature is a personal story of quasi-historical fiction that feels like the best family home-movie ever made. It is someone’s distinct artistic vision, and it’s that highbrow, charismatic personal stamp that makes Roma worth watching, warts and all.

— However… those warts include several extended sequences of filler, engorging the film to an unreasonable length. Yalitza Aparicio’s working-class protagonist isn’t bland, per se, but she’s not giving a memorable performance in a memorable role, either.