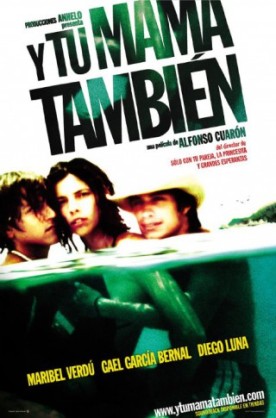 Before Gravity (2013), before Children of Men (2006), and even before Harry Potter and the Prisoner of Azkaban (2004), there was famed Mexican director Alfonso Cuaron’s Y Tu Mama Tambien (YTMT, And Your Mama Too). Cuaron’s critical acclaim and cult classic skill extend into the heydays of early new millennium cinema; in 2001, the man released what would be his most controversial and explicit film. YTMT is either famous or infamous for its frank, unfiltered approach to sexuality and shooting sex scenes in general. Depending on your comfort level with watching people hump vigorously, engage in group sex, and ejaculate into public swimming pools, you’ll either find the film crude or hilariously refreshing.

I for one am a split between these two reactions, as I am on most controversial matters in cinema. On the one hand, it is a relief to watch a film that doesn’t seem so embarrassed by the human body and lovemaking like 17th century puritanical English colonists. Much of the dialogue is sexually charged, not crude in context, but honest and taking a sort of, “well, this is the way people actually talk about sex” approach, and several scenes are genuinely steamy. On the other hand, many sex scenes and the plain, uninteresting fashion in which they’re shot begs the question: What was so important about showing people hump repeatedly, anyway? Critics of the Motion Picture Association of America’s (MPAA) prudeness towards sex compared to their general leniency with on-screen violence, bring up a would-be fair point that “this is what human beings do” and “it’s more appropriate to watch two people have sex than two people kill each other.”

I think that is fair a point, but after watching one pair of people screw on-screen after another, a part of me thinks I could have had the same emotional reaction watching pornographic clips online. Where as great action films showcase beautiful, intricate choreography coordinated with nuanced camerawork, most sex scenes in cinema, including those in YTMT, don’t impress from a technical standpoint. Cuaron seems fascinated by the act of two people having sex on-screen, unedited, the subject matter itself, rather than the artistry of how sexuality is filmed. Too me, that lack of cinematic nuance left me desiring more from the sexually charged atmosphere of Cuaron’s film; thus, I found the “groundbreaking” depiction of sex in YTMT a mixed bag, if not altogether disappointing.

Other than the film’s experimentation with sexuality, YTMT is also a sociopolitically motivated narrative that analyzes the lifestyles of middle-class to upper-class Mexico in comparison to the rural and working poor, the latter whose lives often go unnoticed and their hardships unappreciated. Much of the movie’s thesis has to do with how these different social classes of Mexico (or any society for that matter) exist side by side and are heavily intertwined, yet the awareness of or empathy for those less well off by the more privileged is immense. How often this technique of social observation, via random voiceover or a casual pan of the camera, generates much emotional impact is hit or miss, as the observations of the narrator about the world around the protagonists are sometimes insightful, while other times they feel haphazardly inserted and heavy-handed.

As for the films’ central narrative, its character-driven story about two adolescent boys taking a road-trip with an older woman, is the most straightforward yet often the most rewarding. Cuaron and his co-writer brother Carlos develop all three characters (particularly the younger males) and contrast the boy’s youthful energy, immaturity, and nativity with their older shared paramour’s experience, maturity, and perspective.

Passionate, though inexperienced lovemaking in YTMT.

All in all, Alfonso Cuaron’s signature millennial piece is a fine work of cinematic drama and should be commended for its ambitious, three-pronged thematic attack. Its various thematic structures don’t always fit, sometimes feeling like they were forced together rather than constructed organically, but for all its effort it is an admirable road-movie. Y Tu Mama Tambien packs enough sexual energy and sociopolitical intelligence, matched with effective characters, to make this journey transcend language and cultural barriers. Its crudeness is overrated and perhaps unnecessary, but I’d be lying if I didn’t say that made it more memorable.

SUMMARY & RECOMMENDATION: Cuaron’s signature road-trip covers more thematic ground than most films twice its running time, while never feeling stuffed or overly detailed. When the Cuaron brothers’ screenplay and Alfonso’s direction come together, the film runs like a well oiled machine. Y Tu Mama Tambien is well cast and led by an alluringly sensual Maribel Verdu. Her chemistry with her sexually potent but trigger-happy male suitors is well orchestrated and perfected in a tragic shot combining Foosball and a payphone booth.

— However… YTMT’s ambition is also its biggest weakness, as its deeper intellectual aspirations sometimes feel clumsy. Many of the oft discussed sex scenes are underwhelming, artistically speaking.

? Who cares who you two fucked when you come that fast!