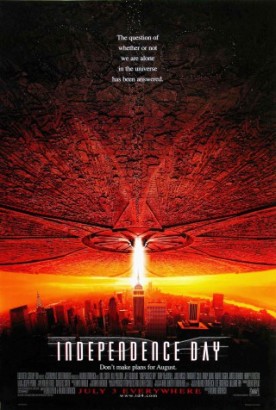 Happy Fourth of July, everybody! In celebration of America’s Independence Day, today I’m going to review… the best movie about America, ever: Independence Day! In case you weren’t around for the mid-1990s or have been living under a rock for the past few decades, Independence Day (ID4) was German director Roland Emmerich’s big Hollywood break that set the trend for big, loud, disaster movies for years to come, and made blowing up American landmarks cool.

Top: Oooooh, classic imagery! Bottom: Jeff and Will troll the alien mothership before they blow it to hell.

Needless to say, many of the imitators that followed (Armageddon [1998], Deep Impact [1998], The Core [2003]) including those made by Emmerich himself (Godzilla [1998], The Day After Tomorrow [2004], 2012 [2009], White House Down [2013]) achieved nothing more than being shadows of the original 1990s nostalgia disaster-flick; quite frankly, many of us film fans with half a brain have grown tired of these brain-dead, bland, repetitive blockbusters whose directors seem to masturbate to meteorites, storms, and aliens destroying famous landmarks like Michael Bay gets off on crashing cars and interchangeable robots into each  other. You could even extend my exasperation with Hollywood’s oversaturation of dumb disaster-movies to Emmerich’s original Hollywood breakthrough to some extent, as ID4 itself is none too bright and often resigns itself to overblown spectacle and fiery explosions more so than truly captivating characters or a consistently engaging plot.

Despite its plethora of plot holes, though, ID4‘s story is well paced and spaces its bombastic set-pieces against quieter periods of reflection and peace. Most of the film’s charm and now iconic imagery are in fact borrowed from countless other, better science-fiction adventures, like the premise from War of the Worlds (1953), the spaceships from V (1983), the aliens from Aliens (1979, 1986), the dogfights from Star Wars (1977), and even the fallen Statue of Liberty shot from Planet of the Apes (1968). To Emmerich’s credit, however, most if not all of these winks to classic, generally much better films are tasteful homages rather than cheap ripoffs, and that’s because they’re incorporated into the narrative in natural ways. You could sum up the film as a fun hodgepodge of classic sc-fi imagery, because that’s essentially what it is.

The film’s famous destruction-spectacles are a healthy mix of practical and digital FX. In fact, many of the famous city destruction-sequences were done without the help of computers and entirely with models and real fire. The cool alien dissection scene utilizes props in conjunction with a slimy extraterrestrial suite reminiscent of the wet, oozing costumes from the Alien movies. It’s easy to understand a large part of this 1990s blockbuster appeal in retrospect because, despite the tiresome, done-to-death trends it would soon inspire and its own rather untalented director, ID4 feels old-school and gritty in many ways because the rise of CGI dominance hadn’t quite arrived yet. Filmmakers, including Emmerich, were still somewhat “limited” by the boundaries of practical special FX. It is shocking how much more tangible this 1990s disaster blockbuster feels in comparison to the many blockbusters it spawned in the 2000s and 2010s, including those made by the same director!

As for the cast and characters, they’re a mixed bag ranging from classic, summer blockbuster-ready heroes like Will Smith’s fighter pilot bad boy, Jeff Goldblum’s stuttering but still stylishly sexy engineering tech, and Bill Pullman’s best movie president ever — but also includes lamoes like Randy Quaid’s dumb, alcoholic cropduster side-plot and weak supporting female characters like Vivica A. Fox and Mary McDonnell. The film’s cast helps the film more than it hurts it, given how Smith, Goldblum, and Pullman get plenty of screentime, but it’s still disappointing how most of their characters’ development is reduced to romantic blockbuster cliches and the dumb lines outnumber the iconic ones. 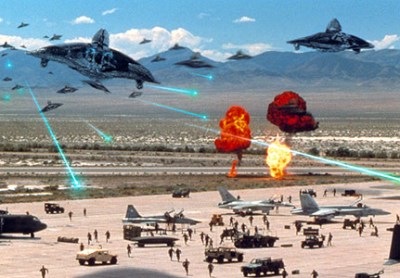 In the end, though, you’re probably not going to watch something like this for the Shakespearean characters nor the politically balanced, mature patriotic mindset. You’re going to fistpump at the alien mothership explosion and Pullman blasting alien fighters out of the sky in aerial dogfights, and if you’re an American (or have a good sense of humor), you’ll enjoy that awesome cheesetastic speech near the end. Despite the film’s slower moments, annoying minor characters, and relative lack of imagination, ID4 is a damned good blockbuster, and will make you reminisce about 1990s nostalgia and a time when summer blockbusters were actually fun and uplifting — not all dark and Nolan-y. Happy 4th of July!

SUMMARY & RECOMMENDATION: Smith, Goldblum, and Pullman combine for a summer action movie-trifecta that hasn’t been beat in any disaster-film since. Independence Day’s special FX, while not exactly groundbreaking, hearken back to a brief, balanced moment in movie history when filmmakers used digital FX when needed (not whenever it was most convenient) and still relied on practical techniques as their bread and butter.

— However… the film’s screenplay isn’t terribly intelligent, even for a summer blockbuster. Several annoying characters and cliched character arcs drag down much of the alien butt-kicking fun.

? Seriously, nothing in this movie’s premise or narrative is remotely original. Oh, and God Bless America! Have a great holiday, everybody.