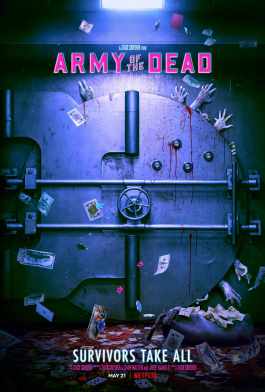 I tired long ago of discussing controversies surrounding Warner Bros.’ DC Extended Universe and Zack Snyder’s involvement with films such as Man of Steel (2013) and Justice League (2017, 2021). One of the reasons I grew disinterested in the #ReleasetheSnyderCut mayhem, including both arguments for and against Snyder’s auteur vision in Hollywood, is because I realized I didn’t much care for the type of movies being discussed, regardless of how much artistic control a director like Snyder did or did not have in, say, Batman vs. Superman: Dawn of Justice (2016). 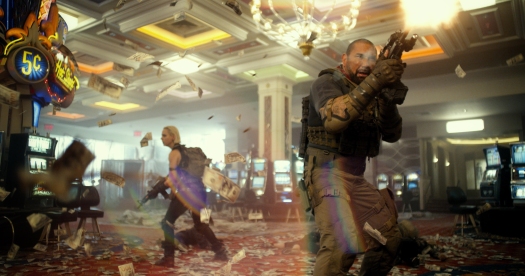 Dave Bautista (right) and Nora Arnezeder (left) blast their way through hoards of agile undead in the movie’s third act.

Aspects of Snyder’s directorial vision, his distinctive slow-motion, desaturated color palette, his taste for gory violence (outside of mainstream superhero properties, that is), and competent use of both original and popular culture soundtracks appeal to me a great deal, while his acting direction, choice of screenplays and dialogue, and sense of humor leave much to be desired. His entire filmography is hit or miss with me, as I avoided the likes of The Owls of Ga’Hoole (2010) and Sucker Punch (2011) out of disinterest, enjoyed 300 (2007) and Watchmen (2009) for their embrace of Snyder’s fever dream visuals, and remain lukewarm over his DC superhero movies (Man of Steel, Justice League, Dawn of Justice). With regards to the man’s directorial debut, his 2004 remake of George A. Romero’s Dawn of the Dead (1978), I must be one of the few people not enamored with his contemporary take on the most critically acclaimed undead thriller of all time. Then again, I’m not much of a fan of Romero’s work, either.

That brings us to Snyder’s latest movie, Army of the Dead, his first Netflix Original feature and his “escape,” for lack of a better word, from the suffocating confines of major Hollywood studio tentpole blockbusters. Army of the Dead is no chump-budget drama (it cost ~$90 million), but it does represent a sort of return to the director’s exploitation genre roots given its zombie antagonists, explicit violence, and high-concept premise: A zombie outbreak indirectly caused by secret US government experimentation in Area 51 takes over Las Vegas, which is subsequently walled off, and a crack team of mercenaries attempts to steal $200 million from a casino bank vault below the Strip. Great setting, right?

Army of the Dead (henceforth, AD), suffers numerous problems related to how often it fails to live up to that great premise, a combination of both undead action and heist thriller tropes. These problems are a function of both the movie’s digital cinematography as well as the cast’s acting, dialogue, and characterizations, the latter problems being long established weakness of Snyder’s filmography. The former problem, AD’s cinematography, is a surprise given Snyder’s technical prowess as a master of striking visuals and lover of devious, identifiable artistic designs, but this can be explained by Snyder’s miscalculation to direct the movie’s photography himself. AD represents the director’s first use of digital cameras over film stock in a feature film, and his inexperience in that medium is obvious in the picture’s numerous dead pixels (speculators believe at least one Red Digital camera used is at fault) and his extreme use of shallow focus with specialized lenses. I don’t understand how the pixel issues were not solved in post-production, while the decision to film most every shot of every sequence, indoor or outdoor, nighttime or day, in soft, near continuously racking focus drove me nuts.

Problems more characteristic to Snyder’s directorial style include AD’s inconsistent cast, questionable dialogue, and engorged running time. Dave Bautista shows range with his first lead role in a major motion picture, portraying a sympathetic, wounded stoic with decent chemistry amongst his costars; everyone else, however, ranges from OK (Matthias Schweighöfer, Omari Hardwick, Garret Dillahunt) to bad (Theo Rossi, Nora Arnezeder, Ella Purnell), while all their jokes and “witty” one-liners fall flat. Despite all that, AD’s biggest screenplay shortcoming is its overindulgent 148-minute length, which covers a story that could’ve wrapped in less than two hours.

Much of my enjoyment of AD is a function of the high production values of its setting and action sequences. Outside the indulgent, pretentious cinematography, the film looks great and the quasi-post-apocalyptic feel of a ruined, undead Las Vegas is memorable. The opening montage, set to Richard Cheese and Allison Crowe’s “Viva Las Vegas,” may be the best Snyder has done yet, and capitalizes on the prologue’s darker tone. Other standout sequences include a creepy shootout inside a decrepit, low-lit hotel kitchen with classical, slow, shambling zombies, as well as an action-packed race through a casino lobby with rabid, fast, 28 Days Later (2002)-style monsters. Whenever AD shelves its talky, cliched melodrama and sticks to mindless action, it’s an entertaining piece of schlock cinema.

Most of the time, however, Army of the Dead represents the lesser attributes of Zack Snyder’s flamboyant style, including his clunky dialogue, forgettable supporting characters, and verbose storytelling. A Snyder action flick about stealing hundreds of millions of dollars in a quarantined, zombie-infested Las Vegas should not feel this frustrating in theory, but in practice its tiresome subplots, slow pace, inconsistent cast, and irritating shallow focus-digital photography kneecap its wonderful premise. After years of comical fanboy arguments about Snyder’s directorial vision and the artistic direction of the DC Extended Universe, I hoped Army of the Dead would represent a stylistic backlash to those films in particular and the bloated filmmaking style of superhero blockbusters in general, a means for Snyder to break free from Hollywood’s obsessive, market-research oriented control. Snyder instead seems to have transferred many of the worst elements of those films to his more interesting genre instincts here, and the end result is a clunky mishmash of charismatic action with bad melodrama.

SUMMARY & RECOMMENDATION: Army of the Dead starts everything right with a neat premise, effective prologue, and memorable opening montage, while every major undead set-piece looks, sounds, and feels great. Its overall set-design is memorable and this diegetic “Lost Vegas” feels like a fully fleshed out, lived-in world.

— However… much of that awesome high-concept premise buckles under the weight of a forgettable cast outside of lead Dave Bautista, lame dialogue, and extraneous subplots that don’t go anywhere and stretch the movie’s run-time to an unforgiveable length. To add insult to injury, Snyder’s bizarre choice of retro camera lenses, extreme shallow focus, and digital camerawork imply he is as bad a director of photography as he is a screenwriter.

I love movies, music, video games, and big, scary creatures.
View all posts by The Celtic Predator »
« Things You Like that I Don’t, Volume 4
‘In the Heights’ (2021): Please Stop Singing »