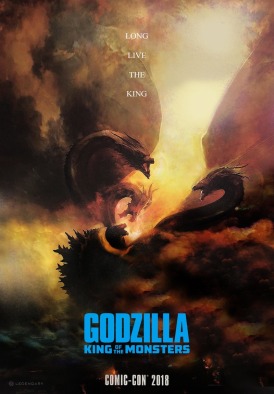 I’ve been a Godzilla fan all my life. During my childhood, I followed the dozens upon dozens of rebooted Japanese Godzilla series as religiously as any standard-issue, American boyhood franchise (e.g. Jurassic Park [1993], Aliens [1986], etc.). The disappointment that was the original Hollywood produced Godzilla of 1998 was also a part of my childhood, like many other G-Man fans, and it wasn’t until the 2014 reboot by Gareth Edwards that that disappointment was more or less alleviated.

I say “more or less” given how much controversy ensued despite Godzilla (2014) being a solid film: Limited screentime for its title character, strategic bait-and-switch teases of monster battles, a bland human cast (Elizabeth Olsen, Aaron Taylor-Johnson, etc.), and an overall dramatic, artsy, dare I say “elitist” tone rubbed some the wrong way. I’ve said before that fanboys are hard to please, typically for no good reason (e.g. Alien [1979] fans’ cries of heresy over Prometheus [2011] and/or Alien: Covenant [2017], DC fans’ civil war over Dawn of Justice [2016], Star Wars [1977, 1980, 1983] fans’ implosion over The Last Jedi [2017], etc.), and what better example of those over-selective, entitled attitudes than the American Godzilla productions? The 1998 film was too watered down, mainstream, and dumb, yet the 2014 movie was too dense, cryptic, and full of itself. I’m not saying I love either film — in fact I dislike the former — but for God’s sake people, put your fanboy love in perspective and don’t always take pop culture phenomena so personally, eh?

Enter Michael Dougherty’s (see Trick ‘r Treat [2007], Krampus [2015]) King of the Monsters, the latest feature in Legendary Picture’s MonsterVerse (yes, that’s how it’s spelled) franchise, which also includes the previous 2014 Godzilla film as well as Jordan Vogt-Robert’s King Kong reboot, Skull Island (2017). As a fan of both films, especially the latter — I consider Skull Island to be the perfect mix of well shot, well paced monster action and filler human stock characters — this is a franchise made for the “adult” (re: man-child) version of my 6-14 year-old self.

That being said, I maintain objectivity as best I can regardless of whatever movie I watch; I’ve also stated many times in different ways how I consider myself a cinephile before a diehard follower of any particular media franchise, and I argue that allows me to evaluate various beloved properties without succumbing to either (A) rose-colored nostalgia glasses, or (B) hyper-critical religious protectionism. King of the Monsters features multiple solid set-pieces with impressive special FX, endows its principle characters (the titular monsters) with nonverbal personalities and memorable behavioral quirks, and even boasts a competent soundtrack that recalls the classic themes of Toho Pictures’ original Godzilla. The movie is also bloated past 130 minutes thanks to an even more pervasive, irritating human cast than the 2014 film, repetitive, nonstop exposition, and multiple pointless characters that add nothing to its plot. All these elements add up to a fun yet inconsistent blockbuster, a mixed bag of Hollywood escapism and condescending schmaltz.

Top: Millie Bobby Brown (second from left) reaches to touch a larval Mothra. Bottom: Ken Watanabe gazes upon a wounded Godzilla before detonating a nuclear bomb to revive him.

I can’t say I was disappointed by King of the Monsters given how the source material — a schlocky, corny Japanese intellectual property made for kaiju enthusiasts with loose cultural ties to the post-World II fallout (pun intended) of Hiroshima and Nagasaki — seldom took itself seriously. I can say I am  surprised at the source of the film’s weaknesses: Its human cast. I never expected a Hollywood Godzilla movie to forgo a human protagonist or anything drastic like that, but given the overwhelming criticism of the previous film’s lackluster cast, I figured producers Thomas Tull, Brian Rogers, Mary Parent, and Jon Jashni would’ve at least scaled back the sequel’s emphasis on the human element. Skull Island was no flawless blockbuster, but its characters were at least functional to the entire plot, entertaining in some respects (e.g. Samuel L. Jackson, John C. Reilly, Shea Whigham), and if nothing else, not irritating. You can’t say the same for King of the Monsters, which hits you over the head with its cliched familial drama, cringeworthy performances from Vera Farmiga and Zhang Ziyi, and numerous filler characters. Farmiga’s motivation and backstory are comical, and her character’s ultimate redemption arc, unearned. Zhang, on the other hand, has an important part to play in this film, but like Jing Tian in Skull Island, was only cast to scramble her basic English lines because Legendary Pictures is a subsidiary of the Chinese conglomerate, Wanda Group.

Rounding out King of the Monsters‘ disappointing cast are filler supporting roles for great actors Charles Dance, Bradley Whitford, O’Shea Jackson Jr., and Sally Hawkins, as well as mediocre actors Thomas Middleditch and Aisha Hinds. All their roles are unnecessary, and should’ve either been removed or relegated to extras. Only Kyle Chandler, Ken Watanabe, and Millie Bobby Brown are semi-likable in their basic, serviceable characters.

What makes King of the Monsters worth the price of admission are its magnificent set-pieces, which utilize its forgettable human cast better than its dialogue-driven sequences do to emphasize the sheer scale of its leviathan combatants, retaining the anthropocentric perspective of Edward’s film. The choreography of these battles is admirable despite their chaos and prevalent weather FX, while the sound-design recalls the magnificent sound-work from Dougherty’s Krampus. These action set-pieces are extensive without burning themselves out a la Man of Steel (2013), The Fast and the Furious (2000-present), or Transformers (2007-2017); they stand out for actually feeling epic in a generation where most every blockbuster tries (and fails) to outdo the last megahit. King of the Monsters‘ kaiju action lives up to the hype, so much so to the point where its classical soundtrack is a mere bonus.

Gather all these pros and cons together and you have a mainstream creature-feature I found worth seeing, but am unsure if I would recommend others paying to see it. Embedded in American culture the G-Man may be, different audiences’ mileage with old-school Japanese monsters may vary, so impressive production values may not be notable enough to incentivize all ages, demographics, or non-cinephiles. King of the Monsters also has as much Hollywood studio bloat, schmaltz, and lazy screenwriting as your typical mediocre blockbuster, so expect much filler along with those fantastic monster battles if you do choose to see it. Regardless, I can’t make a firm recommendation either way, seeing how I smiled as much as I dozed off during my screening. Oh well, at least I got to see Godzilla rip off King Ghidorah’s face(s) multiple times. 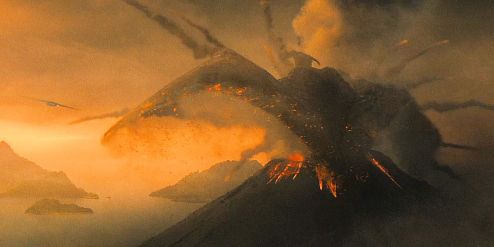 Rodan erupts from his volcanic nest in the movie’s second act.

SUMMARY & RECOMMENDATION: King of the Monsters was enjoyable for the kid in me who grew up on this shit when it was poorly dubbed and featured men in rubber suits, so watching an incarnation visualized with Hollywood special FX by a director who clearly loves monsters on film was a treat. The movie grinding to a halt every time its boring characters talked about saving the world from or with eco terrorism also irritated the fuck out of my inner child. So, keep that in mind if you’re expecting a dramatic increase in Godzilla’s screentime from the 2014 prequel to correspond with a significant uptick in overall movie quality. There’s plenty more giant monster action this time around, as well as more of those pesky, thinly written humans.

—> ON THE FENCE* It’s worth it for Godzilla fans, seeing as how Hollywood has finally provided us with a monster-movie featuring multiple set-pieces of Toho’s most beloved creature designs. All others can take or leave it.