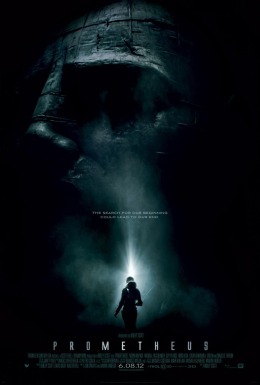 We now welcome Ridley Scott’s return to science-fiction, as well as the Alien (1979-present) universe he helped build. The visuals, special FX, sound-editing, and general tone of Prometheus are reminiscent of classic Ridley Scott-filmmaking. The performances, particularly those of Noomi Rapace and Michael Fassbender, are memorable and do much to carry the movie through its weaker parts. Speaking of those weaker points, pacing issues, confusing creature biology, and questionable character motives bog down the film during its final act. Still, Prometheus is a welcome addition to the Alien mythos considering the most recent franchise additions, i.e. both Alien vs Predator films (2004, 2007), Alien Resurrection (1997), as well as Prometheus’ overall quality production.

The most puzzling thing about Scott’s return to science-fiction is how it is not exactly a “full” return to the franchise he helped create. In an age where virtually every filmmaker is encouraged to produce a direct franchise-sequel, prequel, reboot, re-imagining, or crossover, Scott and writers John Spaihts and David Lindelof chose to pursue a more original route by making a sort of spinoff film that took place in the same universe as the Alien (and presumably the Predator) films, but was not a direct sequel or prequel. While Alien mythology is pervasive and utilized like product-placement throughout Prometheus, the fact that Scott, Spaihts, and Lindelof omitted the word, “Alien” in the film’s title is perplexing, because a movie’s title is the most critical advertisement of franchise brand-recognition. 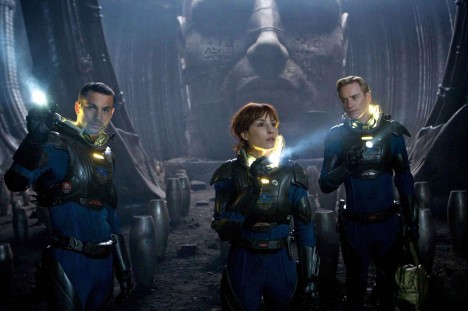 I guess I am not sure what to make of Prometheus, even after seeing it in theatres. It was certainly a far cry from the classic Alien-Predator (AP) titles, those of course being Scott’s original Alien, James Cameron’s Aliens (1986), and John McTiernan’s Predator (1987), but Prometheus also has much more care and effort put into it than any AP film released since the 1980s. Sure, Predators (2010) was alright, but its glaring lack of originality, which almost bordered on plagiarism, made it hard to love.

While I can sympathize with fans’ defensive nature regarding the franchise-canon, and I do admit to raising an eyebrow at how some of the franchise’s mythology was fleshed out, I have a hard time bashing Scott for trying something new. Unless Scott had returned with a truly epic, direct Alien sequel that blew away everyone’s expectations — something that I doubt will ever happen at this point — those same fanboys whining about Scott “ruining” canonical history now would have been criticizing him for not being original. I think fans, especially those Alien die-hards who believe buckets of gore and excessive profanity are what make the franchise great, need to cut Scott some slack here.

As for the actual movie, though, it was a fun adventure, albeit an uneven one. Noomi Rapace, known to most audiences as the star of the original Swedish version of The Girl with the Dragon Tattoo (2009), plays the lead role well, and continues the franchise’s staple of memorable heroines. Michael Fassbender, who has risen up the Hollywood acting ranks of late, re-establishes the franchise’s other trend of strong android characters. Both these actors do a fine job with the material, and their well written characters more or less carry the entire story on their shoulders through the film’s weaker parts.

Those weaker parts mainly have to do with the weaker characterizations in the rest of the cast. Everyone here acts well, but veteran actors Charlize Theron, Guy Pearce, and Idris Elba don’t have much to do or to work with from the screenplay. The story hits its lowest point when Theron gets squashed like a bug by a falling spaceship, which she could have evaded just by running right or left, without a glimpse of meaningful character development of which to speak.

Prometheus also suffers from an unfocused story and misleading antagonists. While the narrative sports a glorious visual style and enthralling tone, various supporting characters meander about with little rhyme or reason to their actions, and several have confusing motivations that are never made clear to the audience. The film also hints at several mysteries about the origins of humanity, our sentient creators, the origins of the xenomorph threat, and the purpose of the facility that our cast explore, but in the end winds up raising more questions than it answers, and not in a satisfying way.

On the other hand, Prometheus’ visuals are outstanding and its cinematography pulls you into its immersive alien environments. There are a plethora of great scenes like Noomi Rapace’s impromptu alien-surgery, a sort of alien “super-zombie” attack, and the introduction of the fabled space-jockeys (now renamed “engineers”) featured in the original Alien. The film boasts amazing production values and its set-design is immaculate. People gush about the “immersive” quality of bloated 3D-epics like Avatar (2009), but if I may say so, the visual atmosphere and tenacious violence of Prometheus are more engrossing than anything George Lucas, Steven Spielberg, or James Cameron have filmed in well over a decade. Ridley Scott’s best films may be behind him, but he hasn’t lost his artistic mojo. 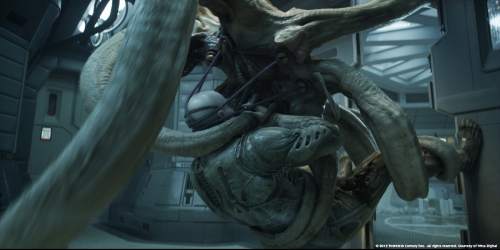 Prometheus, at the very least, provides more room for the Alien-Predator franchise to grow. With its source material now expanded in a critical and commercial success, future filmmakers that attempt to further revive the baddest sci-fi beasts known to man may be able to act more creatively with the license. The human elements remain the weakest part of Prometheus and Ridley Scott’s directorial style as a whole, but in my mind, the terrific performances by Noomi Rapace and Michael Fassbender more than pick up the slack. Alien-Predator fans, who are in my mind, some of the most ruthless, masochistic individuals in pop culture, should check their egos and expectations at the door, especially when they laud unimaginative copy-cats like Predators. At least this film gives a good God damn about creativity and taking chances, however much it utilizes the Alien brand as thematic product placement.

SUMMARY & RECOMMENDATION: Prometheus‘ alien environments feel alive and fill you with a familiar, irresistible sense of foreboding. It’s nice to see a Fox Alien-Predator film that is well acted, directed seriously, has great production values, and feels deserving of a theatrical release. Rapace and Fassbender are standouts, as are the wacky creature designs and several amazing sequences that blend sci-fi, action, and horror tones with ease.

— However… the rest of the cast are criminally underused, especially given all the acting potential on board. I almost threw my hands up when Theron’s character was killed off in the most unimaginative, comical way possible. Spaights and Lindelof can’t seem to decide where they want to take this story.

? Seriously, Charlize, could you not have just run right or left?!