By my count, the venerable Ridley Scott (e.g. Alien [1979], Blade Runner [1982], Gladiator [2000], The Martian [2015]) has directed 27 feature-films, 11 of which I have seen from beginning to end. His stylistic preferences for complex female characters, striking action camerawork, effective location-photography, and diverse acting direction have produced great films across a variety of genres, though his screenplay-selection caters more to the grimy, gritty genres of science-fiction, crime dramas, and historical action rather than, say, family dramas or comedies. His rate of directorial productivity, as prolific as any by big-budget Hollywood movie standards, means that his filmography boasts its share of filler (e.g. Body of Lies [2008], Exodus [2014]), and he has odd relationships with several of his earlier classic titles to this day (see Prometheus [2012], Alien: Covenant [2017], Blade Runner 2049 [2017]); but I can’t recall a single feature where I thought the man phoned it in. His films remain edgy and transgressive to this day, which is rare for senior citizen blockbuster filmmakers (conversely, see George Lucas, Steven Spielberg, et al.). 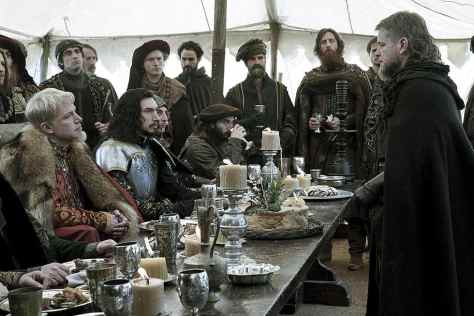 The Last Duel, the latest in a long line of Scott-directed historical epics, also features the first screenwriting collaboration by stars Ben Affleck and Matt Damon since their breakout work on Gus Van Sant’s Good Will Hunting (1997). They and cowriter Nicole Holofcener endow The Last Duel with a non-traditional three-act structure, whereby the film’s primary storyline is retold three times from the perspectives of its main characters: Damon’s Sir Jean de Carrouges, Adam Driver’s squire Jacques Le Gris, and Jodie Comer’s Marguerite de Carrouges, wife of Damon’s Sir Jean. That story is based on medieval historian Dr. Eric Jager’s The Last Duel: A True Story of Trial by Combat in Medieval France (2004), itself a dramatization of the last officially sanctioned judicial duel fought in France by the aforementioned characters played by Damon and Driver. The context of this titular duel — Le Gris is accused of raping Lady Marguerite in the Carrouges estate after years of estranged friendship and political rivalry between the former and Sir Jean — adds not only immaculate tension and emotional gravitas to the film’s narrative, but also feels timeless given the story’s overarching themes of sexual violence, patrilineal “ownership” of adult women through matrimony, and the contemporary #MeToo movement.

Even though The Last Duel is over two and a half hours long and most sections of the narrative are depicted three times, Scott’s latest historical picture could’ve lasted longer and even been released as a 3-4 hour miniseries as far as I’m concerned. All three primary characters (Damon, Driver, Comer) get enough time to shine, but the supporting cast (e.g. Affleck as Count Pierre d’Alençon, Harriet Walter as Damon’s mother, Nicole de Buchard) feel shortchanged and certain plot-points have to navigate sudden, awkward time jumps that make the story feel rushed. As much as I bitch about how contemporary Hollywood movies are way too long, most of that criticism is geared toward giant, FX-driven tentpole blockbusters (e.g. superhero movies, Fast and Furious [2000-] installments, various spy-thrillers etc.) whose straightforward, simplistic stories don’t need to last past 90 minutes. The Last Duel does not fit that mold and its Rashomon (1950)-style format almost begs for a longer, episodic release on streaming, which also might’ve avoided its miserable box office performance ($30.6 million against a $100 million budget).

Back on Scott’s directorial effort, cinematographer Dariusz Wolski’s glorious visuals shine in both intimate conversations within dimly lit castles, gorgeous landscape shots, and brutal medieval combat sequences. Both the film’s dramatic (e.g. Driver and Damon’s complex relationship, the courtroom drama surrounding Comer’s alleged sexual victimization) and action elements (e.g. several montages condense Damon’s illustrious military career, the titular duel) coalesce into a near seamless thematic whole, a far cry from the awkward contrast between the over-the-top, bloated set-pieces and conventionally shot, obligatory “slow talking scenes” found in most contemporary superhero flicks. Again, these smooth stylistic transitions from medieval melodrama to medieval carnage are in part a function of the screenplay’s aforementioned unorthodox structure, whereby the film opens with Damon and Driver gearing for their eponymous fight to the death and Comer is dressed for a potential burning at the stake, then the main storyline unfolds three times from three different perspectives, and then the story concludes with the duel itself. Scott and Wolski together deserve much credit for blending these diverse tonal ensembles from an audiovisual standpoint, however.

Though their faceoff starts with a joust, Damon and Driver soon force each other to the ground, engaging in a brutal armored melee that lasts almost three minutes without feeling overchoreographed.

The Last Duel represents the ongoing consistency of Ridley Scott’s directorial prowess, his emphasis on creative, not gaudy visuals that emphasize everything from mood to characterizations to visceral hyperviolence. His latest epic also showcases the underutilized writing skills of stars Ben Affleck and Matt Damon and, to a lesser extent, Nicole Holofcener, who orchestrate a nontraditional narrative that enhances the arcs of all main characters and makes that violence hit all the harder. While the film’s pacing feels rushed on occasion thanks to its condensed timelines and some of its social commentary feels anachronistic, these are small fry-problems next to the story’s meaningful, cinematic human conflict.

SUMMARY & RECOMMENDATION: With well utilized, diverse cinematography, an intriguing screenplay that channels Akira Kurosawa, and an effective cast, Ridley Scott proves he’s still got it after all these decades. The Last Duel is Scott’s best historical epic since at least the director’s cut of Kingdom of Heaven (2005).

— However… pacing of The Last Duel’s triple-perspective narrative could have been perfected with, oh, I dunno… a limited series format on streaming. The social commentary and lack of ambiguity in Holofcener’s section of the script feels antithetical to both the movie’s period setting and its he-said/she-said melodrama. I still don’t understand why films set in non-English language cultural backdrops have to be portrayed in stereotypical, upper crust-accented English.

? Adam Driver: Why would she do this? All of France is talking about this, and I’m innocent. I’ve said publicly that this never happened! || Željko Ivanek: And yet, under extraordinary pressure and at great risk to her name and reputation, Lady Marguerite has said that it did.