My Interpretations of Punk

Left: Though the 2004 Hellboy sported a darker, Gothic twist of 1940s fascist villainy, the 2008 sequel, The Golden Army, transforms into a heightened fantasy of clockwork structures and steam-powered machines. Right: An example of The Matrix’s (1999) digital rain.

In my struggles to define the different audiovisual styles of various films, including and especially the diegetic minutiae of the worlds in which their narratives inhabit, I stumbled across numerous articles, forums, and reactionary podcasts discussing the numerous “punk” aesthetics of fictional words in different art forms, including but not limited to novels, comic books, and movies. I also noticed I felt — perhaps correctly so — that I didn’t understand what various aesthetic styles meant, what popular culture works they included, or even what having an artistic style of “punk” implied.

My rough understanding of artistic “punk” is that the word is a shorthand definition for describing fully formed artistic worlds, also known as diegeses (plural) or a diegesis (singular) where authors set their stories. The first broad diegetic style described was cyberpunk, a subgenre of science-fiction focusing on cybernetic and digital technology that proliferates into a futuristic society; this society combines rebellious countercultures (the “punk” suffix of cyberpunk) with high-tech (the “cyber” prefix of cyberpunk) lifestyles. Author and software developer Bruce Bethke first coined the term in a series of short stories and a novel titled Cyberpunk (1983); thereafter, various styles and subgenres of speculative fiction adopted that naming convention for other artistic worlds… “world[s] built on one particular technology that is extrapolated to a highly sophisticated level… even [a] fantastical or anachronistic technology, akin to retro-futurism, a gritty transreal urban style, or a particular approach to social themes,” which is how cyberpunk “derivatives” like steampunk, dieselpunk, and biopunk are currently described on Wikipedia.

As some observers have pointed out, futuristic world-building styles defined by genetic engineering and biotechnology (biopunk) or retrofuturistic depictions of alternative history dominated by steam-powered technology and Victorian Era culture (steampunk) are not so much descendants of cyberpunk art styles as they are analogues to them. All punk-aesthetics are consistent yet not rigidly defined formulas for building lived-in, fleshed out narrative settings.

At least, that is how my brain and personality interpret them. I do not wish to prompt debates over which specific works of art, specifically film (I’m a cinephile before any other sort of appreciator of the arts), should be cataloged under which particular punk aesthetic. Taxonomy is difficult enough in evolutionary biology using sophisticated physiological and genomic analyses, using quantitative empirical methods, that my head aches at the thought of arguing with other nerds over the precise definitions and boundaries of artistic subgenre movements. No doubt many cinematic works can and have been cross-referenced over multiple punk styles. Instead, what follows is my personal, some might even say “subjective” interpretation of different popular diegetic motifs. These are my broad, rudimentary understandings of various punk aesthetics as exemplified by popular film, written in the hopes of creating a sort of shorthand reference essay to which I can link future movie analyses. 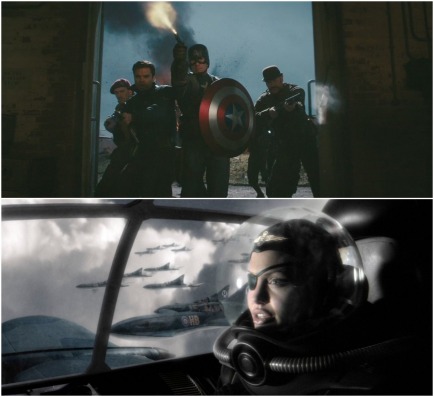 Welcome to a world where the 1940s never ended in The First Avenger (top) and Sky Captain & the World of Tomorrow (bottom).

Some final thoughts on punk aesthetics: As you can tell, much crossover exists between different movements of world-building, and some of this cross-pollination is a function of visual art styles while other shared influences are more thematic. I won’t delve further into the weeds of which titles are more this type of diegetic style versus that, save for in passing observations in future, standalone film reviews. For now, take this post as a surface-level reference list of popular diegetic “toolkits” used to create distinct, well defined settings for storytelling on film… and other media.