‘Beyond Thunderdome’ (1985): The Family-Friendly Mad Max 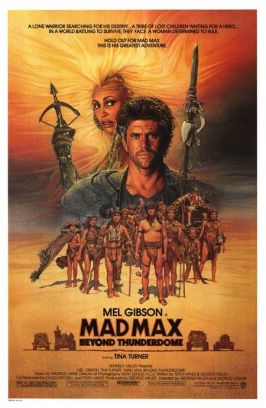 The critical and cultural consensus of George Miller’s Mad Max franchise (1979, 1981, 1985, 2015) has solidified since the release of its most recent, best, and most acclaimed picture, Fury Road (2015). While I respected the franchise for its influence and tenacity prior to the 2015 film, I was never a die-hard fan of the original two installments, the second of which, The Road Warrior, is considered one of the best action films of the 1980s. Fury Road changed everything with its surrealist imagery, post-apocalyptic majesty, complex characters, nonstop action-driven plot, and Oscar winning production design.

Given the insane heights of the franchise of late, it’s easy to forget that even a series as consistent and universally respected as Mad Max had its low points. The first Mad Max feels quaint in comparison to its sequels, but holds up as a straightforward revenge thriller. Though general audiences may have forgotten it, the worst of the Mad Max series is in fact its second sequel, Beyond Thunderdome.

Beyond Thunderdome was the last film to star Mel Gibson in the title role, and was also the first and so far only film to see Miller partner with a co-director, fellow Australian George Ogilvie. I’m not sure if the film’s direction suffered from too many cooks in the kitchen or Terry Hayes’ questionable script, but the fact of the matter is Thunderdome is a dud among its high-octane franchise brethren. Put another way, it is one of the most anemic, impotent “action” blockbusters I’ve seen in my lifetime.

The production values of the first act are impressive, displaying a wide range of outdoor and indoor sets, perhaps inspirations for the later ambitious Hollywood epic, Waterworld (1995). The titular Thunderdome, a creative post-apocalyptic twist on the Colosseum, is the best sequence in the film, which pits Max against Master Blaster. Unfortunately, the film takes a nose-dive in its second and third acts following this intense setpiece.

Jay Bauman of Red Letter Media reflected that a proper title for Mad Max: Beyond Thunderdome should be Mad Max Goes to Thunderdome for the First Half of the Movie and then He Meets Up with Kids. Once Max is ejected from Bartertown following the political disputes of his fight with Master Blaster, his wanderings through the desert and subsequent meeting with assorted child actors brings the story to a screeching halt. The narrative’s pacing slows to a crawl, and the adolescent cast themselves are inconsistent, demonstrating poor chemistry with Gibson and limited emotional range.

What’s worse is that this supposed action film has no memorable action scenes besides the aforementioned Thunderdome gladiatorial combat. While there is an extended chase sequence involving a train and a few minor vehicles at the movie’s climax, its choreography is limited and pails in comparison to the rest of the franchise. The tone and intensity of Thunderdome’s action sequences are so tame one feels like they’re watching Indiana Jones and the Kingdom of the Crystal Skull (2008). Even the original 1979 Mad Max feels hardcore and edgy compared to this toothless action film.

That being said, it’s hard to hate Beyond Thunderdome when its setting is so imaginative and adult cast so competent. On the other hand, it’s quite easy to not recommend this film for either casual moviegoers, Mad Max fans, or action cinema fans in general, given its tame violence, slow pacing, and baffling descent into family friendly drama. Beyond Thunderdome feels like a bizarre Hollywood commodification of a hard-edged property, a watered down derivative of something far more cinematic and potent, which makes the production’s native Australian roots all the more puzzling. If The Road Warrior (1981) represents the best of hardcore, unapologetic 1980s action, Beyond Thunderdome represents the equally identifiable 1980s stereotypes of bad hair styling, stilted, cornball dialogue, and bad melodrama.

SUMMARY & RECOMMENDATION: For a franchise so respected for its high-octane action and brutal post-apocalyptic setting, Mad Max: Beyond Thunderdome feels like a live-action version of The Rescuers Down Under (1990). It is more for kids than action junkies, and feels about two and a half hours long despite being 107 minutes.

— However… Mel Gibson is reliable as always, and the titular Thunderdome action sequence is cool. The production design of Bartertown is also impressive, although I can’t quite decide whether its inhabitants are more strange than interesting.

? Why didn’t Tina Turner kill Max at the end? What was her motivation for letting him go, besides quasi-respect for pissing her off the entire movie? I don’t get it.

I love movies, music, video games, and big, scary creatures.
View all posts by The Celtic Predator »
« ‘Deliverance’ (1972): When You’re a Long Way from Home
‘War for the Planet of the Apes’ (2017): The Decade’s Best Franchise Concludes »