What’s Your Archetype? Or… Most People are Cats or Dogs

You don’t need to be a sociologist or a researcher of artificial selection to know that the domesticated cat and dog (Felis catus and Canis lupis familiaris, respectively) are humanity’s most important, if not most favorite, pets throughout our history. Before you anticipate this post devolving into a diatribe on which type of pet I prefer or which pet most people believe is the “better” companion animal, let me steer the conversation toward two seemingly disparate themes: (1) Most people are drawn to cats or dogs as pets because they “relate” to them as companions on some level; cats and dogs represent two broad archetypes, or personality profiles that fit most people. (2) By extension, most character-driven stories, including those told on film, elaborate on these two archetypes through their respective protagonists or ensemble casts.

What I mean by this is that most people own dogs or cats because they are, for all intents and purposes, cat-like or dog-like in the archetypal sense (more on that in a moment… ); because of this, most stories — at least those dependent on characters to drive their pacing, story progression, and personify overarching themes, which are the majority of stories in popular culture — are based on these cat-like or dog-like personalities.

What does it mean to be cat or dog-like? Well, my non-scientific, highly subjective thesis simplifies the human condition into what are popularly considered attributes of dogs and what are considered typical of cats. What are some common, dare I say universal features of dogs and cats?

Most stories in film are either cat-centric or dog-centric, espousing the philosophies of either the former or the latter. Given how these feline or canine characters are driving their story, their personality types determine their arcs.

For example, common arcs for “cat-like” characters include journeys of the self, such as abandoning one’s cynicism about people/oneself/the world, finding a small, tight-knit surrogate family as a compromise between lonely independence and stereotypical canine “fitting in,” or a more general, healthy acceptance of one’s independence, a celebration of independence, if you will. The point is that cats are independent and notoriously difficult to control, whether for good or bad intentions, and thus stories about them are told on their terms. A cat’s arc concerns the tradeoffs of living by one’s own code, going the lone tiger route, and how keeping (most) others at arm’s length becomes the lens through which they see the world.

A dog’s arc is all about finding a “pack” in which to belong; much of this arc has to do with an accepting or championing of responsibility, either as a role-player in or a leader of a team. Remember, a dog’s identity is tied to their pack in a way a cat’s seldom is; this is why these arcs have so much to do with themes of responsibility, of not running away from one’s problems, because responsibility most always implies an obligation to someone else or a larger group. A cat’s sole responsibility is to themselves, which simultaneously makes them more interesting, complete characters, yet also more vulnerable to repetitive storytelling; there are only so many ways you can pitch a dark-and-brooding character, where as alpha dogs, underdogs, and ensemble casts yield a variety of narrative premises.

A lone wolf or a pack of dogs? Will Smith with his canine companion in I am Legend (2007).

Examples of Dogs, The “Superman Extreme”

If you’re taken with my hackneyed classification of film characters as extensions of their attachments to humankind’s most stereotypical companions, a shorthand method to identify dog characters is their relationship to a team, a crew, or cohesive pack unit. As the most common film examples will include war films, sports dramas, or political dramas — all stories with an intimate focus on hierarchical organization or teamwork — these stories and their protagonists tend to have a more conservative (re: old-school) bent.

Examples of Cats, The “Batman Extreme” 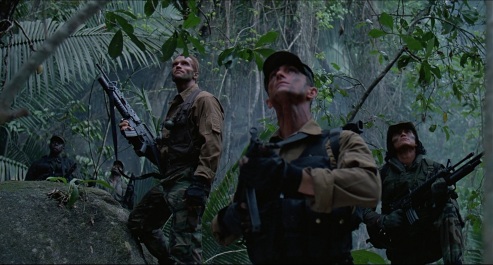 A shorthand way to identify feline characterizations in film is to think “dark and brooding,” “wisecracking smartass,” or “anti-hero” over conventional do-gooders. Picture Batman, Deadpool, or Wolverine over, say, Superman.

While possessing a sour disposition is not enough to qualify as a cat (our friendly felines are often noted for their spunky attitude and playful nature, and the light-hearted Deadpool is as independent and transgressive as they come), arguably the most common feline character archetypes are descendants or hybrids of the classic film noir detective. Noir protagonists are, by definition, outsiders to the settings and conflicts they inhabit and investigate, respectively; this outlier or 3rd-party status allows them to analyze situations from a less biased, but also more jaded and lonely perspective. In many ways, these figures are ciphers, circling higher-profile figures before outside forces or happenstance draws them into a given conflict, often in ways that challenge their cynical loner philosophy.

My ultimate interest in this novel classification system is determining where each of us fits. Everyone may not fit into my two-species system, but I’ve hypothesized people tend to gravitate toward cats and dogs for reasons beyond mere boredom or companionship; we connect with these ubiquitous animals because we see ourselves in them, and their dichotomous personality profiles are comparable to classical human profiles in many respects.

I believe this is the basis for people connecting with certain characters and stories more than others. While great, well written characters are relatable to most viewers on some level, there’s no question in my mind that different people are predisposed to certain characters and character arcs based on their personal experiences and self-actualization. I’ve discussed before how our tastes in the arts — not just the particular media we enjoy, but the specific projects within a given medium — tell us much about ourselves and how we view the world. This personification of feline and canine archetypes is reasonable, I argue, given those animals have been a bedrock of humankind for some time now, despite flaunting such disparate lifestyles and personalities. Like dogs, most people are fine giving or taking orders as part of a structured organization, a reliable team, while plenty others, like cats, strike a unique, somewhat lonelier style. Our cinematic narratives reflect this.

I love movies, music, video games, and big, scary creatures.
View all posts by The Celtic Predator »
« Why ‘Everybody Loves Raymond’ (1996-2005)…
The Great American Stereotypes »

10 thoughts on “What’s Your Archetype? Or… Most People are Cats or Dogs”