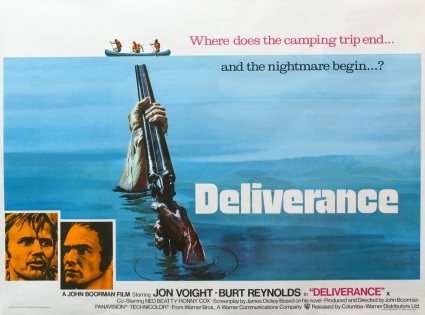 One of the most influential, controversial, and groundbreaking films of the American New Wave was John Boorman’s Deliverance. On the one hand, its portrayal of rural, working-class communities in the Appalachian Mountains (often referred to as “mountain men” affectionately and “hillbillies” derisively) remains infamous to this day, and imprinted negative stereotypes of rural white American communities (particularly those in the American South) upon Hollywood. On the other hand, Deliverance is a masterclass in outdoor location photography and features career-highlight performances from its principle cast, including Jon Voight, Burt Reynolds, Ned Beatty, and Ronny Cox; its minimalist but notable banjo-dominated soundtrack has also acquired a legendary status.

Top: Earlier in the film, Burt Reynolds flaunts his rugged masculinity with some bowfishing. Bottom: John Voight (foreground right) relaxes against a cliff face as he prepares to shoot a mountain man (background center) he believes shot one of their group.

For those of you unfamiliar with the film, the American South, Appalachia, or rural America in general, Deliverance is most infamous for its portrayal of a male-on-male rape between local mountain villagers and Beatty and Voight; the latter two, along with Reynolds and Cox, portray a group of suburban (perhaps Atlanta) outdoor tourists; this, along with the infamous and ad libbed “squeal like a piggy!” line, have defined the film in pop culture, but the film is much more than this notable yet horrifying sequence.

Deliverance is defined as a drama, a thriller, and a horror picture depending on whom you ask. Though I would argue its flirtation with the horror genre is minimal at best, the film’s narrative is an unsettling analysis of culture clash and adventure into the unknown wilderness. Voight, Reynolds, and company are the sympathetic vessels through which the audience experiences this haunting journey, but the blurring legality and disconcerting emotional acceptance of violence throughout the film by all parties involved complicate its sectarian conflicts.

One notable sequence exemplifying the film’s urban-rural cultural exchange occurs in the film’s opening act, where Reynolds has cajoled two mountain men to drive the group’s vehicles to a dropoff point downriver, but cuts them off on their way to the river against Voight’s protest. When Reynolds drives to a dead end and then backs up in front of the locals, they have one of the story’s more memorable exchanges:

The film’s establishment of tone and pacing are stellar, two sides of the same coin. Boorman’s use of long, static takes or slow pans on tripods take advantage of efficient ensemble staging as the cast interact with one another, unfolding this journey at a steady yet inevitable pace. Reynolds, Voight, Cox, and Beatty’s dialogue with the locals is awkward and standoffish, including a unique banjo/guitar competition that’s one of the most famous sequences in the whole movie. Here as in other parts of the film, Boorman cuts to close-ups sparingly and emphasizes foreboding through long, slow zooms. Deliverance is far from a subtle film, but its visual tone and deliberate editing are almost surrealist in their omniscient, abstract patterns.

Boorman utilizes ambient sound and foley FX over non-diegetic musical soundtracks; only a few instances of non-diegetic music exist throughout, and the most notable use of music is the aforementioned and diegetic “Dueling Banjos” sequence. This absence of a robust, charismatic soundtrack sets Deliverance apart from its New Wave, nay pre-new millennium brethren; in its place are powerful, dare I say overpowering sound editing consisting of bird calls, rustling leaves, and gurgling waterways that set the tone and elaborate narrative themes as much as any dialogue.

In addition to its sociopolitical controversy, Deliverance was notorious at the time of its release for its guerrilla production style, cutting costs on such trivial matters as health insurance, professional stunt men, and grueling outdoor photography safety precautions. Voight is said to have scaled an entire cliff himself during the second act, and the cast braved dangerous rapids throughout the production. The lone instance where this hurts the film is during that aforementioned cliff sequence, which, due to the actors performing their own stunts and lack of proper insurance, was shot as a day-for-night sequence, which is distracting. Boorman underexposed the camera and manipulated what he could in post-production, but the FX lessen the visceral impact of and buildup to one of the film’s best scenes. 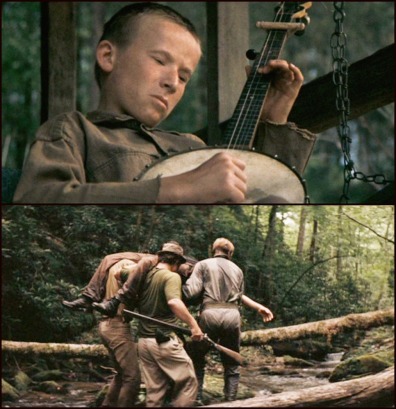 Top: Billy Redden, a local of Rabun County, Georgia, where the film was shot, relaxes in his swing-bench with his famous banjo. Bottom: Voight (far right), Beatty (center left), and Cox (far left) carry the corpse of a local to an impromptu burial site.

As for the main characters, Beatty and Cox represent the ignorant yet harmless urban stereotypes and novice outdoorsmen. Reynolds is the charismatic, cocky leader and most experienced outdoor enthusiast — almost a wannabe survival nut; Voight, our protagonist, is the most relatable of the bunch, familiar with the outdoors but more cautious in exploration of the intimidating wilderness and his interactions with the locals. The cast boast great chemistry throughout, whether they’re philosophizing about environmentalism, rural America, modern society, or fighting over the horrific decisions they’ve been forced to make during their journey. Voight’s arc in particular is impressive, transitioning from the quiet, unassuming follower at the beginning of the film to a desperate, hardened survivalist once Reynolds’ character is sidelined, to a calculating, political strategist who talks his group free from the incestuous grasp of local law enforcement.

Deliverance draws mixed feelings from Appalachian natives and cinephiles to this day, but John Boorman and company’s execution of this timeless narrative also holds up from cinematographic and thematic perspectives. Aside from the clunky manipulation of lighting in one key scene, the film’s technical merits are near flawless, while its sociopolitical implications apply to 2010s America as much as 1970s America. My best advice with regards to first-time viewers would be to ignore the cliched jokes and “squeal like a piggy“- references and watch this with as fresh a mind as possible, while still taking into consideration rural vs. urban cultural dynamics. Either way, it’s a film not worth passing.

SUMMARY & RECOMMENDATION: Deliverance is considered one of the finest American films of the 1970s for good reason; its cast feel genuine and have fine chemistry, its use of environmental cinematography and minimal soundtrack emphasize its themes of foreboding and the unknown, and its diegetic musical elements characterize its unique aesthetics and narrative personality. All negative stereotyping aside, Deliverance is one of the best films about rural America and American culture clash ever made.

— However… Boorman’s manipulation of lighting during a would-be nocturnal scene are unconvincing and look dated.