‘War for the Planet of the Apes’ (2017): The Decade’s Best Franchise Concludes

In an age where superhero (and some non-superhero) extended cinematic multiverses are the norm, with side franchises and spin-offs galore, and in a day when remakes, reboots, and re-imaginings are dismissed as further examples of Hollywood’s sheer lack of imagination, one rebooted prequel trilogy beat its chest against the grain, and with expensive CGI as its secret weapon: The Rise, Dawn, and War for the Planet of the Apes (2011, 2014, 2017). Unless another cinematic universe emerges in the final three years of the 2010s, this re-imagined Planet of the Apes saga is the decade’s best franchise.

Rise of the Planet of the Apes, directed by Rupert Wyatt and starring James Franco, was an example how to use modern contexts to re-evaluate old — and some would say antiquated — science-fiction concepts for the better. Its use of genetic engineering, as well as societal fear of bioterrorism and pandemics, brought the surrealist premise introduced in the 1960s back from space and down to earth; Dawn of the Planet of the Apes elaborated its precursor’s implications of ethnic solidarity, sectarian conflict, and instinctual hominid (and by extension, primate) prejudices. In its third act conclusion, War for the Planet of the Apes summarizes these franchise themes in a somber, bittersweet sociological think-piece on human nature and what it means to be sentient.

Numerous critical reviews asserting War to be the best of the bunch, a rarity in Hollywood blockbuster trilogies (e.g. The Dark Knight Rises [2012], Return of the Jedi [1983], X-Men: The Last Stand [2006], The Godfather Part III [1990]) are correct; Reeves’ exclamation point to this series boasts the best overall writing, direction, and special FX of the franchise, but not in the ways most would expect.

War’s thematic weight of the individual’s heart of darkness and the duality of ape soaks every scene; Caesar’s brooding is emphasized throughout, as is the production design’s use of cold, desolate environments and deserted, decaying human settlements. As Caesar and his small band of allies travel to seek vengeance on an earlier act of brutality against Caesar’s family, silence dominates, while occasional riffs of Michael Giaccino’s competent score accentuate minor chase sequences or subtle character revelations. Caesar’s hallucinations of Koba at a couple key narrative moments are the film’s most obvious examples of his inner struggle, finding an effective compromise between The Revenant’s (2015) almost frivolous surrealist sequences and Dawn of Justice’s (2016) over-the-top, ambitious fever dreams.

From a cinematographic standpoint, Reeves executes his most versatile style yet with the help of New Zealand cinematographer Michael Seresin. War’s action sequences utilize everything from extended slow-motion photography to overhead tracking crane-shots, while its emotional character moments emphasize numerous close-ups on telephoto lenses with extensive, yet out of focus, background composition. Reeves and Seresin often shoot shot-reverse-shot dialogue scenes with such long lenses that it feels like you’re spying on the action (Paul Greengrass style); these extremely long lenses are also used in singles with either unfocused foreground or background imagery, such as when Caesar holds a gun to Woody Harrelson’s antagonist in a key sequence. Combined with long shot length (many of these notable close-ups are held for what seems like forever) and gradual racking focus, these telephoto shots mine every drop of suspense and intensity from their unforgettable character scenes.

An entire essay could be dedicated to the strength of War’s motion-capture CGI. While Rise’s digital FX flirted with photorealism and Dawn’s usage of motion-cap was convincing after some repetition, there is not a frame in War depicting a CGI ape character that does not look like the real thing. Every tight shot on Caesar’s face convinces me he is a chimpanzee, not an actor covered in dots and then layered upon with hundreds of hours of computer graphics-artist labor. These FX are seamless, and anyone who says otherwise is lying. This film is a special FX extravaganza, and the only reason one may forget that is because of (1) the strength of the characters and the story, and (2) the CGI is so effective you may even forget it is there. That’s how good it is.

The final element of War worth discussing is its human characters. Aside from the mute child character of Nova (Amiah Miller), the lone principle human character is Woody Harrelson’s villain, known simply as The Colonel. A descendant of Marlon Brando’s Colonel Kurtz if there ever was one, Harrelson represents the final major evolution of this series to the point where its human characters are no longer a handicap as in Rise, nor a neutral but forgettable aspect as in Dawn, but a critical positive. As great as Andy Serkis’ protagonist is, his journey would be so much less rich without Harrelson’s borderline jihadist opposition, his Biblical test of will. 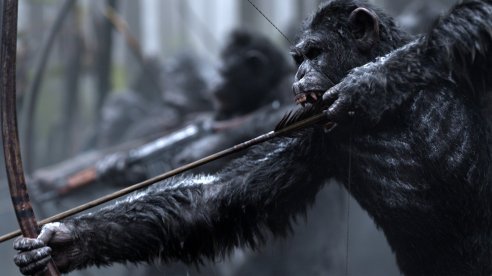 War for the Planet of the Apes contains few large-scale action sequences, but its opening set-piece is intense.

In the end, War for the Planet of the Apes is a blockbuster exception to the rule in modern Western filmmaking, from its overarching franchise structure to its characterizations to its use of digital FX to its unapologetic dedication to science-fiction themes. This series should be celebrated, and may it encourage Hollywood studios to take more risks when they inevitably and inexorably reboot/remake/re-imagine the next major blockbuster property.

Perhaps the most impressive aspect of this trilogy is how each installment improves upon its predecessor, with this final act learning from the few shortcomings of the earlier films and completing Caesar’s arc in satisfying fashion. It is a tall tale that relies on the oldest formulas of science-fiction, namely using a fictitious yet scientifically plausible premise to explore questions of the human condition and society itself. With the help of modern special FX, a great cast, and a somber yet heartfelt visual style, War for the Planet of the Apes concludes the most cinematic and memorable film franchise of the 2010s.

SUMMARY & RECOMMENDATION: Matt Reeves finishes his contribution to the reborn Apes trilogy with a distinct cinematographic style, powerful action sequences, and a slow-burn, dramatic arc for his principle characters. Andy Serkis and Woody Harrelson give great performances, and are complimented by more low-key, eccentric characters like Steve Zahn and Amiah Miller. War for the Planet of the Apes is also the premiere motion-capture special FX extravaganza in global filmmaking.

— However… the film is a tad long in the tooth at two hours and twenty minutes, which is one area it doesn’t deviate from mainstream blockbuster filmmaking.

— HIGHLY RECOMMENDED: It’s not quite as entertaining as Dawn of the Planet of the Apes, but it’s even more dramatic and even more memorable.

? Don’t worry, Maurice; you’re home now. Apes are strong… with or without me.

I love movies, music, video games, and big, scary creatures.
View all posts by The Celtic Predator »
« ‘Beyond Thunderdome’ (1985): The Family-Friendly Mad Max
‘Dunkirk’ (2017): Christopher Nolan Changes It Up »