I have made no secret how I consider Rupert Wyatt and Matt Reeves’ modern Planet of the Apes (2011, 2014, 2017) series the best franchise of the 2010s. While plenty of Hollywood intellectual properties (IPs) were more prolific (e.g. The Marvel Cinematic Universe [2008-2019]) or more profitable (e.g. The Fast and the Furious [2001-]; Transformers [2007-2019]), this second reboot (the first was Tim Burton’s ill fated attempt in 2001, starring Mark Wahlberg) of the original Planet of the Apes (1968-1973) series represents the most optimistic scenario for any big-budget remake, an overwhelming critical and financial success that bests its predecessors. Well scripted, directed, and featuring the most groundbreaking motion-capture (mocap) digital FX since The Lord of the Rings (LOTR, 2001-2003, both of which involved the venerable Andy Serkis), the foundation to this rebooted IP’s success is the clever reimagined premise by screenwriters Rick Jaffa and Amanda Silver, who contributed to both Rise and Dawn of the Planet of the Apes, the first two installments of the franchise. 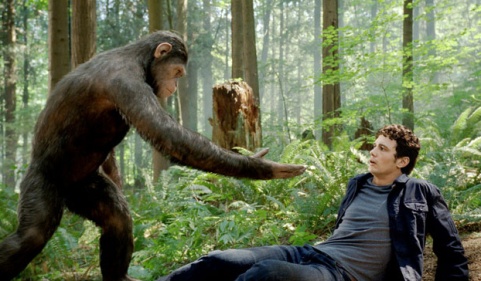 A grown Caesar (Andy Serkis) extends his hand in respect toward his father-figure, James Franco.

The original Apes series of the 1960s-1970s was based on the intriguing yet goofy premise described in La Planète des singes (1963) by French author, Pierre Boulle. Limited by mediocre makeup FX and heavy-handed social commentary, the older films lived and died on their source material’s diegetic details and convoluted time-travel plot-devices, which were interesting on paper if not on film. Burton’s 2001 film was a relatively faithful remake, in my assessment, as it replicated the goofy social metaphors and unintentionally racist undertones of the original series with weirder performances (Eli Roth’s turn as the antagonist, General Thade, is a highlight) and much better makeup. The first remake was also a box office winner, grossing $362 million on a $100 million budget, but for whatever reason studio executives at 20th Century Fox heeded critical and fan advice over box office gross and shelved future sequels. The development hell that preceded that first remake’s production and Burton’s disinterest in future sequels no doubt also played roles in that decision.

Canceling a franchise based on the 2001 film paid off in spades a decade later once Jaffa and Silver’s revised screenplay gave the series new life. Instead of time travel and futuristic technology, Rise of the Planet of the Apes uses a contemporary setting based on genetic engineering and biomedical research to explain a possible future where non-hominid apes could gain intelligence and form their own sentient society. An unintentional side effect of this story’s laboratory experimentation on apes, which involved a viral-based drug to ostensibly treat Alzheimer’s disease, was that drug’s lethal infectivity against humans, which was explored in the sequels Dawn of and War for the Planet of the Apes. Rise and its sequels therefore have more in common with films like Jurassic Park (1993) and Contagion (2011) than they do the original Apes movies and the 2001 remake.

The only drawbacks to Rise as a standalone feature are how it pails in comparison to its greater sequels. For one, its computer generated imagery (CGI) mocap, while ambitious, isn’t seamless a la Dawn or War, and requires suspension of disbelief when the ape characters act opposite live-action human characters. Another significant weakness of Rise, again in comparison to its franchise successors, is how limited its human subplots involving James Franco, Freida Pinto, John Lithgow, Tom Felton, and David Oyelowo are. Their sections of the film aren’t bad, per se, nor does anyone give a poor performance (Franco in particular surprises with effective chemistry with his costars), but the ape characters, lead by Serkis, are the heart of the story; the pacing slows whenever the camera pans to Pinto and Franco’s budding romance or Oyelowo and Felton’s mustache-twirling villains.

Whenever the main plotline of Serkis’ lead comes into focus, however, the movie flies. Beyond Serkis’ great physical performance and his realistic, emotional arc, the story’s reliance on blocking, framing, and body language to convey narrative information enhances the film’s cinematic merit. Most films, including great ones, have to be directed around dialogue or exposition-dumps, with their dramatic sequences often feeling unrealistic as a result, but Rise and its sequels avoid this problem. Rise’s focus on non-verbal communication (the ape characters communicate either through brief sign language or physical confrontation) tightens exposition, emphasizes set-design details, and streamlines the film’s visual storytelling. I cannot overstate how effective, how cinematic the ape-dominated scenes in this film are, how much fun they are to watch thanks to their rapid pace and universally understandable detail.

Experienced director of photography, Andrew Lesnie, best known for his work with Peter Jackson (e.g. LOTR, King Kong [2005], The Hobbit [2012-2014]), uses subtle camerawork for much of Rise as a result of this quiet, often dialogue-free storytelling, yet he gets a chance to show off in the story’s third-act finale set atop the Golden Gate Bridge. Allotted a budget of only $93 million, modest for a high-concept Hollywood film, one can tell much of the movie’s CGI FX and expensive camerawork were saved for this memorable confrontation between Serikis’ ape rebellion and a police blockade. This action centerpiece still feels understated relative to the bloated CGI spectacle common to superhero and fantasy films of the era, but the narrative builds organically to this exciting climax that makes ample use of great FX, horse stunts, and a massive digital gorilla crashing a helicopter. It’s great stuff! 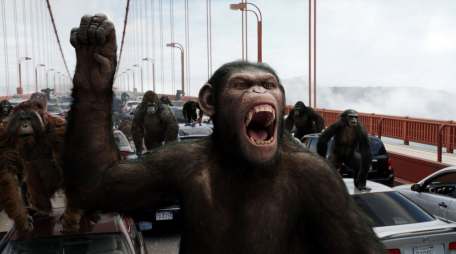 Besides paving the way for a trilogy of great, commercially successful films, Rupert Wyatt’s translation of Rick Jaffa and Amanda Silver’s script to screen modernized the dated, weird concept of the Planet of the Apes franchise in a way few thought possible. That is the most surprising element of this first installment in the 2010s rebooted series, though it would be a missed opportunity if not for director Wyatt’s ability to meld Andrew Lesnie’s cinematography with the story’s ingenious use of sign-language and non-verbal dialogue. Admittedly, Rise of the Planet of the Apes is not as fun when it turns its attention to its obligatory human cast, but that’s a minor blot on an otherwise assured start to the best, most consistent franchise of the past decade.

SUMMARY & RECOMMENDATION: Armed with confident direction, effective CGI, and creative dialogue choices, Rise of the Planet of the Apes revitalizes a near forgotten, obsolete Hollywood IP against a modernized diegetic backdrop that analyzes topics like genetic engineering, animal welfare and, yes, pandemics without ever compromising its cinematic merit.

— However… the human cast, likable though they are, feel like filler to placate general audiences unsure about a hard science-fiction film dominated by ape sign-language.

? Draco Malfoy can’t catch a break no matter what timeline he’s in.