To dispense with the obvious, 2017’s Dunkirk is the least distinct film of Christopher Nolan’s career. The Anglo-American’s filmography, particularly his last three pictures (Interstellar [2014], The Dark Knight Rises [2012], Inception [2010]), has become a subject of mass audience debate and fanboy controversy over the auteur’s characteristic flair and flamboyant style. It is to the man’s credit that most, if not all, of his films are so recognizably his, while also being well regarded by critics and the box office. That being said, his overwhelming dependence on saccharine thematic elements and character-driven narratives, in combination with complex premises and long-winded storytelling, provide ample material for parody or derision. A concise, surgical auteur in the vein of Denis Villeneuve or David Fincher he is not, nor the stylized, revolutionary firebrand who is the grindhouse extraordinaire, Quentin Tarantino.

What Dunkirk lacks in terms of color variety, it compensates with extensive visual geometry, dynamic editing, and sheer scale.

Dunkirk, like Interstellar before it, is new genre ground for Nolan, the latter being his first straightforward science-fiction film while the former his first war film. Unlike Interstellar, Dunkirk suffers from none of the characteristic weaknesses of his filmography and, in accordance with the auteur’s inherent strengths as a filmmaker, feels refreshing within its genre. Dunkirk is Nolan’s shortest film since his debut feature, Following (2002), at 106 minutes, features an ensemble cast with no protagonist, is story-driven as opposed to character driven, and possesses none of the thematic schmaltz of his lesser movies. This is a tight, concise, effective thriller that relies more on sound editing, parallel editing, soundtrack, and underwater stunts to convey its themes than starring actors, memorable characters, or extended action sequences.

In terms of narrative structure, Dunkirk is told across three interlocking stories spread over disparate time scales as a non-linear narrative. The first, named The Mole (Land), follows Fionn Whitehead, a British Army private stranded with 400,000 compatriots on coastal France awaiting rescue across the English Channel. This takes place over a week’s time. The second, named The Sea, concerns a civilian boat crew led by Mark Rylance who, rather than allow the British Navy to commandeer his vessel, drives to Dunkirk, France himself to rescue what soldiers he can (the Channel is so shallow, military watercraft were unable to rescue troops en masse during the escape). This story takes place over a day. The final story, The Air, consists of three British Spitfire pilots (including Tom Hardy) engaging with the Nazi air-force as they provide cover to their troops on land and sea, which takes place over one hour.

The greatest attributes of this movie are its overall structural editing (namely its cross-cutting), its sound editing, and its soundtrack. Though its three separate storylines unfold over varying lengths of time, Nolan and editor Lee Smith weave these three tales back and forth to maximize suspense for every set-piece and special effect. The film never stalls or takes a break, progressing from one intense aerial dogfight, foiled boat escape, and dive-bombing to the next. Incredible sound FX ricochet from Spitfire machine guns, U-Boat torpedoes, and rushing water, emphasizing controlled chaos and human survivalist desperation at every step.

Accentuating these interwoven perspectives and pulse-pounding special FX is Hans Zimmers’ unique soundtrack, which is built atop a rapid tempo and near continuous background percussion reminiscent of a ticking clock. Long, drawn out crescendos build with the visuals, such as ground troops scrambling to escape incoming assaults, or Mark Rylance hauling panicked soldiers out of the water before a sinking destroyer’s fuel catches fire. The best parts of the film coordinate this suspenseful music with all three narrative perspectives, cross-cutting back and forth with the music’s rhythm until the sequence’s inevitable violent conclusion.

The major shortcomings of Dunkirk are derivative of its story-driven, ensemble structure. No characters are memorable beyond their survival instincts and desperate struggle to escape, including recognizable faces like Rylance and Hardy. In Fionn Whitehead’s Mole storyline, one may struggle to keep track of which nameless soldiers are which, even the titular “Mole” (the title has multiple meanings) who is revealed near the end. Only Cillian Murphy’s shell-shocked survivor from The Water is identifiable, and more for his post-traumatic stress disorder than for being likable, relatable, or otherwise interesting. Much of this is not a criticism of Nolan’s execution, screenwriting, or acting-direction, but rather the inherent tradeoffs of the film’s narrative structure. 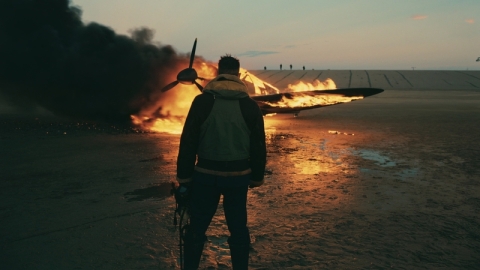 Tom Hardy sets his Supermarine Spitfire ablaze in one of the film’s calmer moments.

All in all, Dunkirk is a welcome deviation from Christopher Nolan’s reliable but sloppy norm. He has been and should be lauded for his screenwriting, characterizations, and use of practical FX at the blockbuster level, but to say his auteur shtick has become routine or his self-serious, overwritten dialogue grown repetitive would be an understatement. Dunkirk, like War for the Planet of the Apes (2017) released a week before it, is an otherwise awards-friendly, dramatic thinkpiece disguised as a big-budget summer blockbuster. It is Dunkirk’s style and unorthodox structure that take the place of human charisma, as well as any saccharine, heavy-handed schmaltz that may occur as an unwanted byproduct. If you loved all or most of Nolan’s previous films, that may not be a reliable indicator of your reception of this film, but if you respect Nolan’s commitment to his craft while acknowledging his filmography’s glaring weaknesses, this may be just what the doctor ordered.

SUMMARY & RECOMMENDATION: Dunkirk is Christopher Nolan thinking outside the box, stretching beyond his comfort zone, if you will; there are no memorable heroes or memorable characters, for that matter, but the story at hand is engrossing while the FX and grounded set-pieces are pulse-pounding. Check your (Nolanized) expectations at the door and bring your earplugs.

— However… the best cross-cutting and sound editing in the world can’t build a human connection with the audience, though they can maintain a thematic one. You’ll lose track of multiple characters multiple times throughout Dunkirk.

I love movies, music, video games, and big, scary creatures.
View all posts by The Celtic Predator »
« ‘War for the Planet of the Apes’ (2017): The Decade’s Best Franchise Concludes
‘Hellboy’ (2004): From the Dark Side… To Our Side »