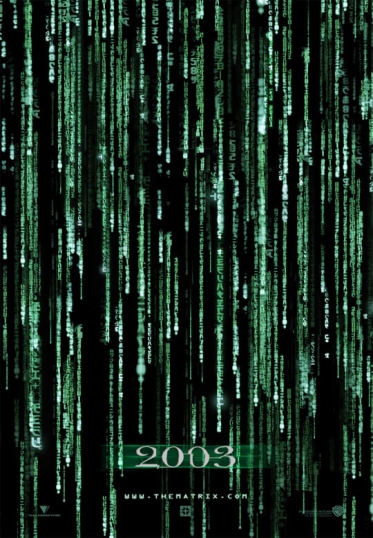 I can only show you the door…

One of the more divisive, underwhelming followups to a landmark Hollywood trendsetter was the 2003 two-part sequel to the original Matrix (1999). The first Matrix remains one of the defining science-fiction action films of new millennium cinema, holding up to this day as a thinking-man’s high-concept, big-budget genre film, and arguably the most original mainstream cinematic diegesis since Star Wars (1977). It has been ripped off, referenced, and parodied ad nauseam, yet its sequels met lukewarm reception upon release, and have been dismissed by some as two of countless unnecessary or misguided franchise expansions to classic originals.

Is that latter reception warranted? For a long time, I was unsure, which brings us to the topic of this essay: Are the 2003 trilogy continuations of The Matrix, Reloaded and Revolutions, effective as films in their own right, having been misunderstood or maligned due to their high-profile status as sequels to a beloved concept… or are they the convoluted, glorified fan-fiction that detractors claim have permanently stained the original’s legacy? Let’s analyze both sides of this argument, starting with the easier (re: dominant) viewpoint:

1.) More Zion, less actual Matrix: It was expected that the story, cast, and thematic scope of the Matrix universe would expand with the maturation of the franchise into a complete trilogy. The depiction of Zion, the lone stronghold of real-world human resistance fighters freed from the machine city’s titular computer generated dream-world, referenced frequently as a major plot-point in the original, was a given. However, many fans were annoyed at Reloaded’s and especially Revolutions‘ use of Zion, extended sequences within sewers, and post-apocalyptic deserts as the dominant setting. Most criticized was the “sweaty cave-raver” that ended Reloaded’s first act, which was set to the franchise’s preferred techno music and intercut with an equally sweaty sex scene between star and female lead Keanu Reeves and Carrie-Anne Moss, respectively.

There’s much to parse through in these sequences outside the eponymous virtual reality setup that made the first Matrix popular. On the one hand, the real-world setting was a major part of the original as well, and it made narrative sense for the Wachowskis to expand upon their source material and add further context to the human resistance. On the other hand, many of these real world sequences, in particular the Siege of Zion by the charismatic robot sentinels in Revolutions, feel generic and forgettable compared to most every sequence set in the Matrix. This decrepit, post-apocalyptic environment was never a strong point of the Matrix’s original diegesis and feels derivative of other, better post-apocalyptic (e.g. Mad Max [1979–2015], The Planet of the Apes [2011, 2014, 2017]) or dystopian (e.g. Blade Runner [1982, 2017]) series.

2.) CGI stunt-doubles and Dragon Ball Z (1989-1996) ripoffs: When the sequels did transition to the popular, far more interesting virtual setting, much of the close-quarters-combat (CQC) was filmed at a larger scale than the original and utilized greater computer FX. Most notable of these were the two Neo (Reeves) vs. Agent Smith (Hugo Weaving) battles, the first of which in Reloaded featured dozens of Smith “clones” battling Neo in a courtyard, and the second as the finale to Revolutions, wherein Neo fought mono e mono with the assimilated Smith-clone of the Oracle (Gloria Foster, Mary Alice) in a torrential downpour. The former was impressive from a choreographic standpoint, but its use of CGI characterizations was criticized, while the latter descended into veritable anime stunts and bombastic special FX that distracted from its narrative gravitas.

3.) Big plot twists and confusing answers: Reloaded concluded the original path of “The One,” also known as Neo (Reeves), which revealed that the entire concept of the digital messiah and the human resistance was just another level of the machines’ control. It was a wonderful twist, in keeping with the unsettling nature of the Matrix itself, but its manner of reveal in Reloaded was clunky and its explanation in Revolutions was worse. The now widely parodied “Architect-scene,” whereby Neo discusses this phenomenon with Helmut Bakaitis’ “father of the Matrix,” is a long, drawn-out mix of complicated expository dialogue and awkward cuts to an even sloppier action sequence with Moss and a pair of Agents. 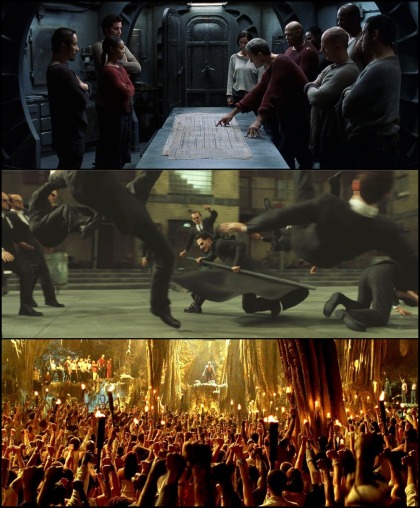 Top to bottom: A bunch of characters — most of whom we don’t care about — discuss battle strategies, a CGI Neo takes out multiple CGI Agent Smiths with a pole, and the sweaty cave-raver begins.

Once we transition to Revolutions, pertinent questions both the principle characters and the audience have about the aforementioned revelation are dismissed by a recast Oracle (Alice replaced a then recently deceased Foster) with vague excuses and condescending whataboutisms. It all feels rather forced and insulting to the audience’s intelligence.

1.) The Merovingian: In truth, the best parts of both sequels include not just the lauded freeway chase sequence, but the entire second act of Reloaded, including everything and anything involving The Merovingian (a wonderful Lambert Wilson), his wife, Persephone (the always voluptuous Monica Bellucci), and his various “supernatural gangster” cronies. The idea that all or most organized criminals in the world of the Matrix are rogue artificial intelligence programs, who may employ even crazier AI programs masquerading as supernatural monsters as enforcers, is one of the Wachowskis‘ most creative and fun.

Aside from staging terrific action sequences like the aforementioned 10-minute(!) freeway set-piece, great CQC fight sequences in the Merovingian’s mansion, and a fun club shootout near the beginning of Revolutions, all the dramatic scenes with Wilson and Bellucci are memorable. Sequences with them feel like the more natural, organic expansions upon the Matrix source material that fans were expecting, as opposed to the bigger, bombastic set-pieces around Zion.

2.) A Trinity of heroes till the end: While secondary and tertiary characters like Plinkett-Smith, Gay, Watson, and others crowd valuable screen-time, Reeves, Moss, and Fishburne are consistent throughout Reloaded and Revolutions. They worked great together in the original Matrix and continue to work great here, with dialogue, subtle humor, and emotions flowing coherently between all three actors in all situations. Even when things get dumb, like when Trinity dies a second time in Revolutions just prior to Neo’s final showdown with Smith, the impact is gut wrenching. You genuinely care for all three of these characters to the bitter end. One could argue these sequels work on that dynamic alone.

3.) I (still) know kung fu… : What gets lost in the shuffle of a complex narrative structure and controversies regarding the sequels’ overuse of CGI are the sequels’ still impressive production values, special FX, and hardcore cinematic violence. Sure, Neo vs. The Many Smiths suffers from too many digital actors and the Neo vs. Oracle-Smith climax departs from even semi-relatable real-world physics too often, and yes, the prophecy fulfillment lands with a thud rather than a boom, but bullet-time is still bullet-time; kung fu is still kung fu. The Matrix Reloaded and Revolutions remain dependent on explicit, violent action scenes and well choreographed CQC the way few mainstream Hollywood franchises before or since have been.

Neo vs. The Many Smiths is chock full of great choreography, physical humor, and set to wonderful music, as is the finale and every action set-piece that isn’t the sequence where Trinity falls out of a building firing mini-Uzis. The freeway sequence that so many fans rave about as the one redeeming aspect of Reloaded and/or Revolutions may be the best chase sequence ever filmed. It’s that ambitious, detailed, and multi-faceted. Even the wonderful Jakarta chase sequence in Berandal (2014) doesn’t hold a candle to it. It’s that good.

As far as fan consensus on the general quality of these sequels is concerned, there’s agreement that both Reloaded and Revolutions are lesser followups to a classic, universally respected original work. This is not the case where a majority of fans loath a project, but a vocal and non-insignificant minority champion its merits unapologetically (e.g. Dawn of Justice [2016]), nor an even split down the middle a la The Last Jedi (2017). Critically, Reloaded holds water while Revolutions doesn’t fare as well. So, what’s the conclusion?

Neo (Reeves) battles it out with Smith (Weaving) for the fate of both Zion and the Matrix itself.

I think the conclusion is that there isn’t one. The pop culture judgement of the Matrix sequels is inconclusive, indecisive over a decade later, and thus could imply that both arguments for and against these films hold considerable merit. Though Reloaded and Revolutions haven’t rebounded in the public consciousness the way much of John Carpenter’s filmography has, they haven’t been dismissed as a Hollywood cash grab, either. They’re clearly the artistic visions of writer-directors Lana and Lilly Wachowski, however misguided or inconsistent they may be, and retain a certain hard edge that most Hollywood blockbusters lacked until at least Deadpool (2016).

For myself, I still watch them every now and then as a function of early 2000s nostalgia, though not as often as the first Matrix, and always with a more critical eye. The fact that I still watch them at all is indicative of some lasting quality in my eyes, though it’s hard not to admit something(s) feel(s) missing from these ambitious, overindulgent pictures. I guess there’s something for everyone, as well as to piss off everyone.

In either case, I’d argue they’re worth a re-view once in a while to see how they’ve aged for each cinephile; are they a disappointment when considering the prowess of the original? Yes. Are they worthwhile films in their own right despite their annoying weaknesses? I would say… probably.