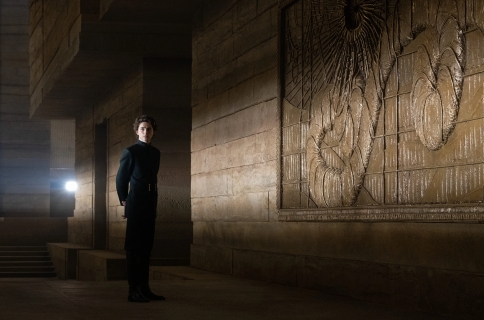 In the first or second act of Dune (2021, 2023), depending on how you delineate the movie’s narrative structure across its two-part theatrical release, Paul Atreides (Timothee Chalamet) explores the confines of his new home on Arakeen, capital of Arrakis.

A few years ago, I wrote a double-review of sorts for Ridley Scott’s Blade Runner (1984) and Denis Villeneuve’s Blade Runner 2049 (2017); I remarked the latter filmmaker, recently ascended to the big-budget, high-concept genre blockbusters of Hollywood, should be given the keys to any franchise he wanted given his filmography’s remarkable consistency and innate skill to meld the cerebral with the stylish. I recalled at the time his childhood interest in Frank Herbert’s Dune (1965) saga, and thought he would be a great choice for the material.

My experience with Herbert’s novels, often considered the pinnacle of modern science-fiction literature and comparable in scope to J. R. R. Tolkein’s Lord of the Rings (1954-1955), started with an intermittent curiosity in the Sci Fi (now Syfy) Channel’s 2000 miniseries adaptation of the first novel (Dune) and 2003 sequel miniseries, Children of Dune, adapted from the second (Dune Messiah [1969]) and third (Children of Dune [1976]) novels. I read those three novels a few years later as a young teenager, noting how much the miniseries captured the tone and “soul” of Herbert’s diegesis despite their low budgets and notorious costume-design. Conversely, I never had much interest in David Lynch’s initial, maligned adaptation, Dune (1984), which I still have not watched as of this writing (November 2021), nor do I expect to ever watch now that a contemporary big-budget — not to mention, quality — adaptation by the aforementioned Villeneuve has come to fruition.

… or at least, a contemporary big-budget adaptation of the first half of the first novel by Villeneuve has come to fruition. Like the recent two-part theatrical adaptation of Stephen King’s It (2017, 2019), the feature-length adaptation of the source material’s second half was only greenlit following positive reception of the first, which, in Dune (2021)’s case involved not only a $330 million (and counting… ) box office take from a $165 million budget, but also subscriber activity from its simultaneous day-and-date release on HBO Max. Unlike the recent It feature, however, this first 1/2-adaptation of Dune doesn’t watch like a complete narrative experience and feels more like a glorified pilot of a high-profile streaming series.

Denis Villeneuve’s self-righteous complaints about Dune’s dual release format (Warner Bros.’ entire 2021 US theatrical lineup was released this way in preparation for the modern streaming wars and in response to the COVID-19 pandemic) aside, this concept of splitting standalone narratives, single three-act screenplays across multiple theatrical releases months or even years apart, is a model I hate. It’s one of my biggest filmmaking pet-peeves, so big that I have dedicated this entire essay to my hatred of it; while this phenomenon, like most dynamics of the international filmmaking industry, has been around in some form or another since the beginning of cinema, I believe the modern, major studio incarnation of this trend started with the 2000-2010s wave of Young Adult (YA)-novel adaptions like Harry Potter (2001-2011; the final installment, The Deathly Hallows, released from 2010-2011), The Hunger Games (2012-2015; the final installment, Mockingjay, released from 2014-2015), and Divergent (2014-2016; the final installment, Allegiant, the first half of the eponymous book trilogy’s final volume, bombed so badly its second half was never shot). This trend proliferated throughout Hollywood afterward, at least until the rise of streaming platforms challenged the efficacy of this production schedule.

Sure, this release model technically predated the likes of Harry Potter even within Hollywood with Peter Jackson’s Lord of the Rings (LOTR; 2001-2003), the Wachowskis’ Matrix (1999) sequels (Reloaded and Revolutions, both 2003), and of course Quentin Tarantino’s Kill Bill (2003-2004), but crucial differences exists between all those films and, say, The Deathly Hallows or Mockingjay or Allegiant or, most notorious of all, The Hobbit (2011-2014) trilogy: LOTR, The Matrix sequels, and Kill Bill told a complete story in each of their theatrical installments, including a beginning, middle, and end, despite leaving overarching franchise plot threads hanging to varying degrees within each installment. I can watch The Fellowship of the Ring (2001) or The Matrix Reloaded or even Kill Bill, Volume 1 and still consume a complete narrative; I want a follow-up conclusion, sure, because those movies are good enough, if controversial in some sense, to warrant another chapter. Even It (2017) executed a full narrative with developed character arcs that can be appreciated as a standalone movie, its absolute mess of a “Part II” in 2019 feeling more like a typical disappointing Hollywood sequel than a necessary conclusion to an incomplete predecessor. The same cannot be said for any two-parter Hollywood YA-novel adaptation, nor even Villeneuve’s immaculately shot, beautiful translation of the first ~200 pages of Dune. These latter examples are filmic projects that start, develop, and then… stop. They don’t end. 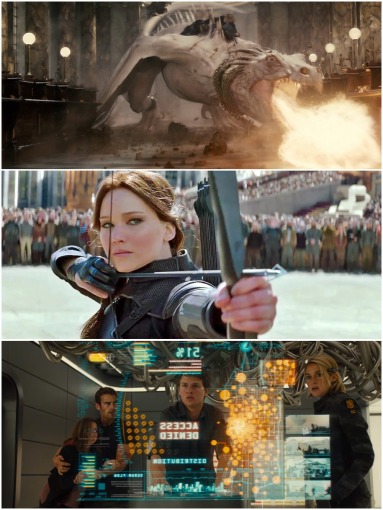 Harry Potter and the Deathly Hallows (2010-2011, top), The Hunger Games: Mockingjay (2014-2015, middle) and Allegiant (2016, bottom) are examples of YA novel adaptations to film that ruined their pacing due their two-part format.

As such, I shall not write a review of this latest cinematic Dune project until it ends, which may or may not be in October 2023 as of this writing. A trend of this site, particularly with regards to my “basic” film reviews, is that I tend to group reviews by franchises, directors, starring actors, or even broad themes. I analyze multiple film projects together instead of splitting lone projects across multiple essays because (1) it saves time, (2) it often provides a nice thematic summary to my essays, and (3) some films, like The Hobbit “Trilogy,” are in truth singular and not plural cinematic narratives. Hence my innate displeasure at the total opposite philosophy for gigantic budgeted, mammoth-production blockbusters released in public theatres.

Splitting singular movies across multiple theatrical installments is jerry-rigging a broadcast television series model for the cineplexes. Instead of this awkward, risky theatrical strategy for adaptations of unwieldy, longwinded novels, why not film an ongoing or limited series for streaming platforms a la Game of Thrones (2011-2019), The Witcher (2019-),  or Mike Flanagan’s Haunting (2018, 2020) anthology? I’ve mentioned this before with regards to the likes of Harry Potter and YA-novel series in particular, which feel readymade for longform visual storytelling within the bigger budgeted yet relative creative freedom of modern streaming services.

As much as I hold Denis Villeneuve’s directorial style in high esteem, his attitude toward Dune’s release schedule, romantic infatuation with theatrical filmmaking, and general refusal to attempt any cinematic project for the small screen makes me question the efficiency of committing ~$330 million for two feature-length productions that are no longer or more detailed than the 4.5-5 hour Sci Fi Channel miniseries from a generation ago. The original Dune novel may find cinematic life, if only barely, on the big screen, but my instincts tell me that any filmic adaptations beyond that first novel will be better suited to the future of streaming.