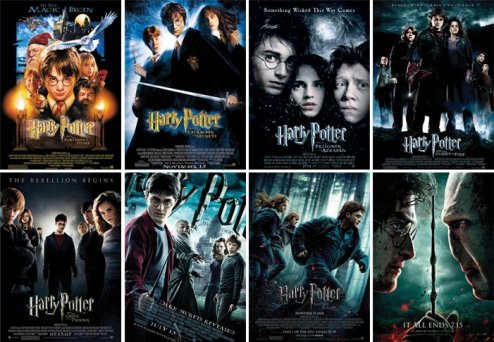 Harry Potter & the Lucrative Box Office: There truly is no magic quite like the sweet, sweet magic of money.

With the upcoming release of Fantastic Beasts and Where to Find Them (2016) upon us, I decided it was time to look back at the Harry Potter film megafranchise that birthed the modern Young Adult (YA) novel-adaptation craze, giving us everything from Twilight (2008-2012) to The Hunger Games (2012-2015) to Divergent (2014-2016) to Maze Runner (2014-2015, 2018) to The Fault in Our Stars (2014). I understand many of those books were written with vastly different intentions, marketed to different demographics, and may have had little to do with one another on paper, but Harry Potter on film broke the mold for translating mainstream novels aimed at teens and young twenty-somethings into billion dollar motion-picture franchises. In many ways, it is as notable a filmmaking trend as the superhero blockbuster renaissance.

I read countless fiction aimed at both young adults and general audiences throughout my childhood. While I have largely transitioned to non-fiction literature and narrative filmmaking as an adult myself, my late grade-school through high-school years (i.e. ages 12-18) were dominated by popular novels as much as movies. The Harry Potter series (books: 1997-2007) was the foundation for all of that. Sure, the series petered out by the time its seventh book released, with author J.K. Rowling seemingly more interested in writing stories about camping and convoluted plot-devices involving horcrux “soul-boxes,” and having the series’ bumbling idiot, Neville Longbottom, kill giant snakes — but looking past all that, Harry Potter on paper was an affectionate, angst-ridden swan-song to the trials and tribulations of adolescence. It spoke to the burgeoning ambitions of teenagers the world over, with an imaginative, dare I say, original wrapping paper of magic for the modern age.

The film-adaptations, however, do almost none of those things. I think what irritates me the most about the Harry Potter movies is how bland they are. Their terrible child actors, bad pacing, and lame dialogue pale in comparison to their literary source material, sure, but simply as works of film unto themselves, they feel as generic and predictable as the latest Marvel Thor (2011, 2013, 2017) movie or fantasy ripoff. That’s what these films feel like — fantasy ripoffs, not actual fantasy movies filled with magic and adventure, such as the fabled Lord of the Rings (2001-2003) films.

If Peter Jackson’s magnum opus represents the pinnacle of modern adapted-cinema, then the Harry Potter franchise represents the biggest missed opportunity. Other more recent YA film-adaptations have committed more egregious sins of whitewashing and sanitizing their edgier source material (The Hunger Games comes to mind), but Harry Potter on film (HP) arguably blew the most potential given its inherently youth-oriented, for-all-ages appeal. You can argue the contrary all you want, but books about kids killing each other in arenas for dystopian bloodsport doesn’t exactly scream PG-13 blockbuster. A magical school about teenagers growing up and learning to be wizards and witches, however, is on paper, box office gold.

So what exactly went wrong? I speak of course from an artistic standpoint, not a box office one, given how HP was the highest-grossing movie franchise of all time until the Marvel Cinematic Universe (MCU, 2008-present) dethroned it in 2015.

For starters, I never cared for the ensemble child cast, particularly the main trio of Daniel Radcliffe as the titular Potter, Rupert Grint as the dorky Ronald Weasley, and Emma Watson as Hermione Granger. While the latter was serviceable as the stuck-up yet likable female lead, Grint and Radcliffe were positively dreadful as the male co-leads, being both robotic and stilted during emotional character moments and prone to melodramatic overacting during serious set-pieces. They didn’t grow into their roles as they aged either, staying about as unlikable as the child cast of Boyhood (2014). Simply put, I never found them convincing as children in extraordinary circumstances, relatable in any way beyond their surface-level youthful looks and awkward puberty, let alone as likable characters in and of themselves.

The rest of the forgettable child cast was underscored by how the series wasted talented English, Scottish, and Irish adult actors throughout the series. Everyone from Richard Harris to Michael Gambon to David Bradley to Maggie Smith to Ralph Fiennes to Brendan Gleeson to Alan Rickman were squandered on bad lines, limited screen-time, and lackluster character development. Sure, these actors looked the part — magical and fantastical and whatnot — but they didn’t feel like fleshed-out characters so much as placeholders for stereotypical British authority figures, the obligatory obstacles for or mentors to the cringe-worthy child cast. All of the aforementioned adult actors from the British Isles are talented and boast enviable filmographies, but their work on the HP series is among their careers’ most superfluous. 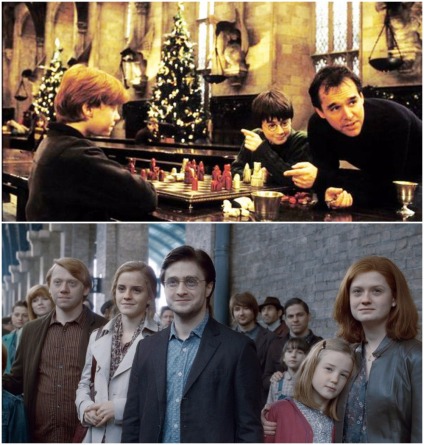 Top: Christopher Columbus (right) directs a young Daniel Radcliffe (center) and Rupert Grint (left) in The Sorcerer’s Stone (2001). Bottom: The poorly aged adult versions of the principal cast gather in the eighth(!) movie’s epilogue. I would’ve been fine had they let this scene go.

Part of the problem with the adult characters’ lack of screen-time or development are the hackneyed adapted screenplays on which their roles are based. Steve Kloves is officially credited with 7/8 of the films’ scripts, while Michael Goldenberg is credited with the fifth film, but it’s impossible to tell how many unofficial screenwriters, producers, and executives contributed to however many first drafts and rewrites for a gigantic franchise with this much money riding on it. The films’ narrative flow and continuity come across as an abbreviated “greatest-hits” iconography of the series’ magical gimmicks, forgoing much of the novels’ memorable supporting cast and the main characters’ emotional growth. It’s clear from the films’ editing that the story was honed to focus on the monstrous set-pieces and CGI-heavy magic FX over the source material’s fantasy riff on a universal coming-of-age story.

All things considered, I believe the main problem with both the Harry Potter film series and the many YA-adaptations that followed is their focus on special-FX and good-looking stars over broader themes of maturation, growth, and youth-bonding. Far more attention was placed on casting child-actors that looked like their source material-counterparts (or their audiences’ most popular perception of them) than finding children who could act and had emotional range. Far more effort was placed on orchestrating over-the-top, extended fight sequences than building a school setting that felt real and relatable. As long as everybody and everything looked acceptable to the fans and general audiences on the poster, the trailers, and the big-screen, people wouldn’t complain and the films would make a ton of money. And that’s what happened.

Contrasting the cinematic adaptations of Lord of the Rings to Harry Potter presents a great case study of the disparate goals of translating works of fiction from one medium to another. The former not only invigorated interest in its source-material and fantasy works in general, but crafted a groundbreaking work of art that stood apart from its literary inspiration. The Harry Potter franchise is uninterested in anything of the sort, and is unabashedly a motion picture-merchandise extension of the popular books of the same name. There is nothing inherently wrong or malevolent about that; it’s simply a marketing strategy, but as a lover of cinema, I find it disappointing when so much money, effort, and so many cinematic tools are used to build a multi-volume franchise that is so artistically empty.

Wait a minute, am I talking about overrated YA-movies or overrated MCU movies?