I’ve noted before that South Asian filmmaking, the big-budget, internationally recognized Hindi studio productions of Bollywood included, has long been the Wild West of film remakes from other cultures, to the point where unsanctioned Indian ripoffs of influential foreign films like Zinda (2006; compare to Oldboy [2003]), Hari Puttar (2008; compare to Harry Potter [2001-2011] and Home Alone [1990]), Ghajini (2008; compare to Memento [2000]), Dhoom 3 (2013; compare to Batman Begins [2005] and The Prestige [2006]) come across more brazen than even Sergio Leone’s “adaptation” of Akira Kurosawa’s Yojimbo (1961) in the former’s debut Spaghetti western, A Fistful of Dollars (1964). Unlike the Dollars controversy, though, international lawsuits against Hindi and South Indian unofficial remakes (i.e. plagiarism) of films originating outside the South Asian diaspora have failed to generate much traction or punitive damages for the plaintiff studios due to the Indian film industry’s fragmented nature, cultural disagreements on creative licensing, and, until recent years, the Indian cinema’s limited box office impact in the developed world. 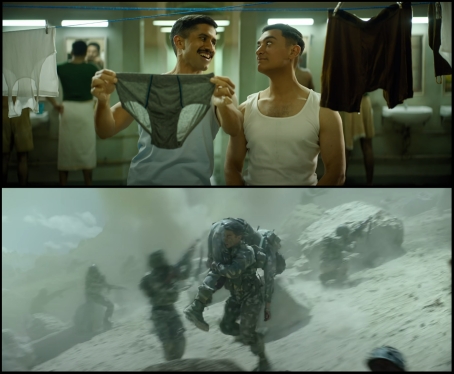 Khan enjoys his time in the armed forces with guest star and Telugu phenom Naga Chaitanya (top; he’s passionate about men’s undergarments instead of shrimp) until their brush with combat (bottom) changes their fates forever.

With the growth of South Asian cinema worldwide as well as the increasing interconnectedness of the global film industry, however, the nature of Indian film adaptations has changed thanks in part to the work of one of my least favorite Bollywood filmmakers, Karan Johar. Producers like him have made efforts to formalize business ties between South Asian and Western film cultures, which has led to, among other things, the facilitation of officially sanctioned remakes across languages and continents.

An example of that phenomenon is Aamir Khan’s latest production, Laal Singh Chaddha, directed by Advait Chandan, the man behind one of my favorite Khan-vehicles in recent years, Secret Superstar (2017). Adapted from the 1990s Hollywood classic, Forrest Gump (1994), for Indian audiences by Atul Kulkarni in what I believe is Kulkarni’s first credited screenplay, Laal Singh Chaddha (henceforth, LSC) represents an admirable attempt to recontextualize a seminal if cornball piece of American cinema to a South Asian backdrop. Whereas Gump dramatized major events in 1950s-1980s US history from the perspective of an autistic savant from Alabama, Kulkarni’s adaptation follows a similarly dimwitted yet talented Punjabi protagonist (Ahmad Ibn Umar as a child, Khan as an adult) as he navigates various historical events throughout his life in North India from the 1970s-2010s. The result is a remake that, if you’re familiar with the Hollywood original, feels familiar yet distinctly Indian.

As far as narrative beats are concerned, LSC follows the exact rhythm and pacing of Eric Roth’s adapted screenplay almost down to the scene, which itself departed a great deal from Winston Groom’s 1986 Forrest Gump novel. Khan’s eponymous lead, like Hanks, is simpleminded, innocent, and yet possesses remarkable physical coordination that allows him to overcome most any plot obstacle he encounters with relative ease; the only consistent source of narrative tension in LSC, same as in Gump, is the love story dynamic with female lead Kareena Kapoor, who gives her best performance in years as the far more interesting and relatable object of Khan’s affection.

As you can tell, LSC is such a close imitation of Gump that my general thoughts on the two are almost identical; the narrative outline from which both LSC and Gump draw inspiration by design ignores the sort of forward-moving, cause-and-effect story structure I prefer in feature-films, which seems to work better on page than on screen. Their title characters are also problematic because, though both Khan and Hanks are cute as innocent dummies (see also Khan in PK [2014]) with an eclectic skillset, most of their struggles are never meaningful and their skin-deep characters, unrelatable.

What I can give LSC credit for is its respectable “Indianization,” its cultural appropriation if you will, of the historical montages for which this narrative formula is also famous, as well as depicting how that history influences its protagonist’s family background. Khan’s Sikh character witnesses various major events throughout Indira Gandhi’s reign in particular (e.g. The Emergency [1975-77], Operation Blue Star, her assassination [both 1984]), which puts his immediate family in far greater danger than Gump’s in the first act. To that end, the endless “running across the country” set-piece dovetails with Khan’s reappraisal of his Sikh heritage in a clever way via his nutty hair and makeup design; the narrative framing device of Khan retelling his life story to strangers on a train is far more visually interesting than Hanks sitting on a park bench for most of the movie; and the warfare sequences with Khan and guest star Naga Chaitanya in Kashmir are exciting. The only area where LSC doesn’t “Indianize” its Western source material effectively is in its soundtrack, which I found middling at best given its parent industry.

Khan snatches a familiar white feather from the air in the opening scene of LSC.

Most of India’s filmmaking’s strengths (e.g. musical song-and-dance, explosive costume-design, melodramatic romances in Bollywood in particular) seem to clash with Hollywood’s (e.g. reference-level digital FX, large-scale battle sequences, realistic method-acting), so the vast majority of older, unsanctioned Hindi “homages” to popular American films have long tested my patience even more than your typical unnecessary Paul Verhoeven remake (e.g. Total Recall [2012], Robocop [2014]). That being said, Advait Chandan’s Laal Singh Chaddha borrows enough heart from its source material and adjusts the cultural background just enough to perk the curiosity of most audiences, I’d wager, even if the oddball pace and shallow protagonist of both the original and this Indian remix fail to impress.

SUMMARY & RECOMMENDATION: As eclectic in its narrative structure as its title character, Laal Singh Chaddha stirs mixed reactions within me due to my torn opinion over Forrest Gump, to which the former remains faithful to a fault. What’s worth watching includes Kareena Kapoor’s complicated, nuanced female lead, the effective use of Indian history and iconography within this quasi-biographical screenplay, and how the story weaves its native sectarian conflict throughout Khan’s character development.

— However… Chandan’s sophomore feature is even slower than Gump at 159 minutes in length (i.e. 17 minutes longer), and retains the simplistic “idiot savant” stereotype that absolves much of its storyline of tension.

? You guys do know that Forrest’s mom slept with the school principal in order to guarantee her son’s education, right?